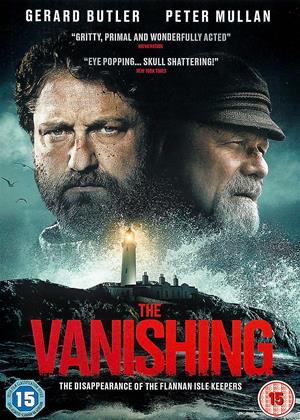 Reviews (14) of The Vanishing

Pared-down stagey drama about three Scottish lighthouse keepers who vanish. It’s apparently based on a true story, but the truth could never have been as ridiculous as this. If you believe the DVD blurb that it’s an “action-packed drama”, you’re going to be sorely disappointed. You’ll see the way it’s going long before the end. Do you think there’ll be some squabbling in such an enclosed space? To be fair, there’s a major incident half-way through when things get interesting for a while, but then it’s back to being a dull, claustrophobic chamber piece, better suited to the stage than the cinema screen.

On the DVD Extras the Danish cinemaphotographer even says that it’s the confined staginess of the piece that attracted him to it – more lighting options to challenge him. As for the Danish director, he was attracted by the Scandi-noir aspect of it. If that’s what you like, fine. If it’s visual flair you’re looking for, look elsewhere. For the most part, this is dull fare.

Not a barrel of laughs - The Vanishing review by JT

I can't remember when I last saw a film that left me feeling so depressed. The characters all seemed to have some kind of mental problem which displayed it'self quite early, with a lot of the action taking place at night so difficult to see what was happening. Which was probably just as well. Very disappointing .

Had good expectations given Gerard Butler in the film but the film is slow and disappointing.

Long boring scenes that could have benefited in some cases from subtitles as I could not understand the strong dialog.

Hard to believe that this could be a true story with abrupt ending so no idea eventual outcome.

Cannot understand why Gerard Butler would have considered a role in this film.

I agree with others that this is worth 2 stars at most.

It's slow, and I mean REALLY slow, and also very depressing and occasionally violent BUT it is set on a rock with a lighthouse, so it's hard to see how anyone can make an exciting film from that.

It's all a fantasy. What probably happened with the 'true story' this story is based on is that the 3 lighthouse keepers were washed away by a big wave when they were fishing on rocks.

This confused story, with some mysterious 'gold' theme, is sheer Boy's Own fantasy.

I did not believe the sudden decent into madness of one character either or what he did.

Too Scottish for my liking too. Taxpayer-funded by state subsidy, remember.

Waste of talent - The Vanishing review by TE

Even the presence of the excellent Peter Mullan can't rescue this over-cooked tale.

The story leaps along with no real attempt to make things logical or credible, and the potentially interesting setting (a remote island lighthouse) is wasted.

"The Vanishing " sets a claustrophobic backdrop to inter-generational and greed vs wisdom clashes between three lighthouse men.Based on the poem "Flannan Isle" ,the film takes its theme from the real-life disappearance of the keepers of Flannan Isle Lighthouse. Terse dialogue degenerates into graphic violence as the three seek to hold on to gold that washed up on the island in a dinghy accompanied by a psychopathic mariner whom the youngest member of the team dispatches with a traditional rock to the side of the head. As each member of the lighthouse crew probe each other's character in light of their acquisition, two Norwegian sailors turn up looking for their loot.The following scenes could be titled" The Birthday Party" meets "Straw Dogs" -the ensuing violence is personal and graphic...and I have to say, too much for me as the character exploration is smothered by paranoid acts involving ropes and blunt objects.

Dull and too long - The Vanishing review by cr

I agree with the other reviewers. V dull and long film about murder on a rock. Too much of the camera focusing on characters as they brood while looking out to sea. Not recommended.

Fails to Deliver - The Vanishing review by IG

Promises a lot but ultimately fails to deliver and is rather dull. The plot is fairly simple but had the scope for a more intriguing narrative and some suspense, watch something else.

Tense, well-acted but its hard to overlook the fact that it is very similar to Sam Raimi's A Simple Plan. Especially as it sluggishly reaches its conclusion.

Overall I enjoyed it though

Disrespectful - The Vanishing review by CT

Film opens with the tag line 'Based on a True Story'. Its true 3 Lighthouse keepsers went missing from the Flannan Isles but why still remains a mystery to this day. This film is a work of pure fiction that IMHO is highly disrepectful to the memory of the missing men.