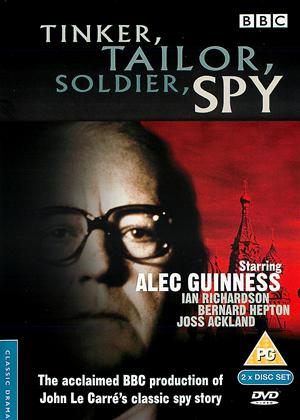 Once upon a time, the BBC's approach to providing intelligent, high-quality drama for adults was to make quite a lot of it, rather than assuming that absolutely everybody would watch "Doctor Who" if they turned it into a slightly gay soap-opera. Which is why, way back in 1979, a fair bit of our license fee was spent on this superb adaptation of a thoughtful, downbeat cold war novel, instead of something in which good-looking people took their clothes off a lot that they could hopefully sell to America.

James Bond this ain't! And, strangely enough, it bears surprisingly little resemblance to the recent movie of the same name, which seems to have picked up on the fact that a few decades ago people smoked like chimneys, and not much else. Alec Guinness as George Smiley is no Gary Oldman, and I mean that as a compliment. This Smiley is a very flawed man whose innate goodness is almost crushed under the burden of using human beings as pawns in a giant game of chess where the stakes are so high that sometimes the players have to try and forget that they're manipulating real people in terrible ways. Other characters are even more damaged, notably one man who very early in the story suffers the horrific consequences of being a game-piece at the wrong end of a bad move.

Overall this is an astonishing tour de force of character acting, and one of the best things the BBC ever did. Since it's more than twice as long as the movie, we really get to know everybody, and even minor characters have real personalities. Far more than the movie, this serial brings home the small-scale human consequences of international power-games in which little people don't matter. You really get the feeling that every one of the characters thinks about this a great deal. Some cope by retreating into cynicism, and many have terrible stress-induced traits like alcoholism, chain-smoking, or borderline insanity. The best of them, such as Smiley, try to remember why it is that they have to do these dreadful things. And the worst? They're the true idealists who have no doubts whatsoever, because men with that kind of conviction will, as we find out, do absolutely anything to anyone.

Smiley may be a good man, but Alec Guinness triumphantly succeeds in conveying that he has repressed his emotional side in order to be able to do what he must, with severe personal consequences. His conscience is still very much alive, and he'll hate himself for giving an order that causes very bad things to happen to someone, but if the consequences of not giving it are even worse, he'll do it. It's said that the test of whether or not an actor makes a good James Bond is if you believe he'd kill you. George Smiley's no man of action, but behind his meek exterior is a razor-sharp mind backed up by the kind of willpower you need if sometimes you have to give the order to have people murdered. Do you believe that Gary Oldman's Smiley would have you assassinated (or worse) for the greater good? I don't, but I have no doubt whatsoever that the Alec Guinness version would. Though of course he'd feel terrible about it.

Very highly recommended indeed, if you like the kind of thriller where you need to pay attention to the intricacies of the plot, and there aren't any car-chases. By the way, if you enjoy this enough to fancy watching the sequel "Smiley's People", skip the bonus feature about John Le Carré on Disc 2, which contains major spoilers. It's rather dull anyway.

Alec Guinnes is truly outstanding as George Smiley. He inhabits the character to the point where one questions whether George Smiley is a real person or just a fiction. This is TV drama at its best.

Alec Guinness was made to play the part of George Smiley. And the rest of the performances are rock-solid - to mention one actor and omit others would be shameful, so just check the cast list, tell yourself 'they don't make them like that any more' and click on the 'add' button.

In the days when a spy film meant spies not action, the BBC adapted this classic. Lots of thinking, shadowy men having meetings, talking in code, and it's not obvious what the outcome will be. Superb character acting.

I was disappointed by the 2011 film with Gary Oldman as George Smiley, and re-watched this BBC TV series with Alec Guinness in the lead role just to make sure that I wasn't misremembering how good it was. No, I hadn't misremembered - it really is excellent. 'Atmospheric' doesn't begin to describe it: it draws the viewer in as the story unfolds, enveloping you in a strange world of spies and codenames, a world where British agents were recruited as Oxbridge undergraduates and seem never to have left the 1940s / 1950s. It is a story most definitely 'of its time', the time of the Cold War, Russia's dominance of Eastern Europe, upper class civil servants and public school educated agents who all speak with BBC accents. The length of the TV series at over 5 hours gives time for the characters to be developed and the complex tale to be told without cutting corners. Yes, it's slow moving - but gripping. Alec Guinness made the role of George Smiley his own and (despite others playing the character over the years), whenever I think of Smiley I see Alec Guinness. Superb stuff, highly recommended - 5/5 stars.

You'd think this was old school, but its careful intensity is quite modern - Tinker, Tailor, Soldier, Spy: Series review by MB

The last time I watched this was many years back, I think on DVD where it looked grainy and ancient. As it was in fact ancient I thought the grain went with the territory - but no, this blu-ray version is as good - or possibly better - than you'd expect visually.

With the exception of a ripe, overwritten (and frankly unnecessary) cameo from Beryl Reid, it's in quite important ways not ancient at all, but clever, strategic, wise and intelligent filmmaking. Much better than the Oldman movie, no doubt because it has the length to go into detail, most of which is highly relevant to the plot.

Go on - rediscover it if you saw it before, or if you didn't, find something older than you are which has the wisdom of its years...