Rent Murder on the Orient Express (2017) 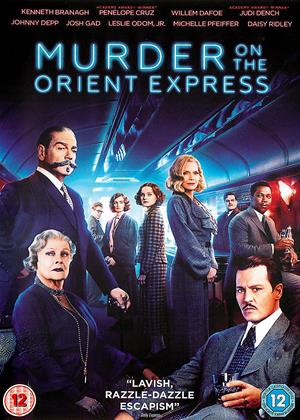 Rent other films like Murder on the Orient Express

Reviews (27) of Murder on the Orient Express

When watching this rehash of a much-filmed Agatha Christie novel I asked myself "why"? The reason is simple - it's produced by Ridley Scott was clearly wanted an international hit because he knows Agatha Christie is known world-wide, so he signed up an all-star cast to make it, with all the boxes ticked. A cynical exercise and one that results in a mediocre forgettable film.

2) There was just too much CGI that looked fake;

3) I riled at the awful clunky political correctness including the complete unrealistic casting of black characters and the tedious lectures about how 'racism is bad'. Really, it sullies the film and has no part in it. Moreover, judging people of the past by modern values is silly, esp when all good characters of the past are portrayed as anti-racist campaigners - which is so unrealistic. Believe it or not people reflect the values and opinions of their time, and many good people of the past were racist - and not just white people. TV dramas are like this too and it's BORING and unrealistic. A lower class black doctor in the 1930s going out with an upper class white girl and accepted by the upper class passengers on a train. WHAT PIFFLE!

I was looking at my watch during this film, getting bored. Basically, it should never have been made - watch a past version for a good film, or watch David Suchet on TV's Poirot, because he is perfect for the role.

I am generous in giving it 2 stars.

Why is Branagh made up as a Victorian conjurer? That is just one of dozens of questions that could be asked of this travesty of Agatha Christie's masterpiece. Watch it for free if you want to see the vainglorious actor/director disappear up his own flue in a display of utter self indulgence; but do not squander money on it. For the definitive, elegant, intelligent movie of the novel go to the 1974 version, beautifully directed by Sidney Lumet, and starring Albert Finney in the perfect in-depth portrayal of the inimitable Poirot.

Despite all the big names, this was one mega-boring, pretentious load of twaddle, masquerading as a murder mystery. I fell asleep twice, and when the ending finally came I couldn't wait to get the disc back into it's sleeve and return to the postbox.

Whodunit? - Murder on the Orient Express review by Nick

Would have been more enjoyable if I did not know the ending, but having seen the superior 1974 version, the viewing was inevitably disappointing. If you are one of the few people that has not seen the earlier version or read the book you may enjoy it. Strangely, the star studded cast are wasted with very short parts as Richard Brannagh hogs the film.

Did we Really Need This Remake? - Murder on the Orient Express review by KW

Remakes of classic films are always a risk and this version highlights the risk. For me the weakest part was the script which could have been more tight and given the actors something to get their teeth into. Try as hard as they could the actors were fighting a lost cause to get anything out of the script and Sir Kenneth's low key performance as Hercule. I hope the final comment at the end of the film' of a Death on the Nile was not an advance notice of another remake!

Take the bus - Murder on the Orient Express review by JD

too many special effects ( which are quite good !)

Not worth the effort ,

there are too many good movies around so don’t waste an evening on this.

Atrocious - Murder on the Orient Express review by AB

A Complete travesty of Agatha Christie, and vey sloppily executed in parts. Plus as usual the ugly spectre of cultural Marxism rears it's head, not like Hollywood is pushing an agenda or anything (yawn). Do yourself a favour and watch the 1974 version instead - it makes this looks like the utter trash it really is.

One of the worst Christie films ever! - Murder on the Orient Express review by JB

The main question is, 'Is this so bad that it's worth watching just for a laugh?' - but it's not really that funny seeing a cast of such excellent talent mired in a dismal exploit like this.

Others have commented on the unecessary and gratuitous updatings, the 'spelling-it-all-out for a assumed audience of ignoramuses', the liberal posturing and so on. It was dispiriting to see one fine actor after another reduced to small and dismal walk-on roles while an absurdly hirsure Branagh plods through the mire towards enlightenment. The main excitement lay in the brief snatches of CGI imagery.

Waste of time - Murder on the Orient Express review by PC

Truly terrible. A handful of decent actors given an appalling script. Just watch the excellent 1974 version instead. It was genuinely chilling and engaging, unlike this tosh

What matters in a mystery movie, specifically for being based on a revered novel with a familiar detective? In my particular case, it’s character. Having been beaten over the head these past few decades from Masterpiece Theater and BBC mysteries, the grander ones stand out because of the performances. On this basis, Kenneth Branagh’s Murder on the Orient Express should work for the talent he assembles and the beauty he places in his cinematography. It should work, in theory.

The most significant fault is that Branagh seems to have so much faith in the story itself that he falls back on a subtleness for the acting. This time the detective of Hercule Poirot, played by Branagh himself, is a more quiet and conflicted man than his usual quirky self. He has his OCD traits of demanding the perfect eggs for breakfast and that both his shoes be muddied by excrement if he’s already taken one step in filth. Branagh’s version, however, tries to make him older and more contemplative with extreme bluntness. Early on, a policeman asks about how Poirot’s brain works and he plainly spells out how an imperfect world cofounds him. Adding to his distance from others is some lost love and an obsession with Charles Dickens.

After resolving another case in the Middle East, Poirot hops aboard the Orient Express for a relaxing transit to London, but trouble seems to follow him. The art huckster Sam Ratchett (Johnny Depp) has come to Poirot seeking protection. That’s not Poirot’s career, unfortunately, as he mostly deals with solving murder mysteries. So when Ratchett is mysteriously stabbed during the night, Poirot is on the case, despite an I’m-too-old-for-this reluctance.

The suspects aboard the train are all questionable characters, but far too aloof. Aside from brief introductions shots, we know about as much as the suspects as Poirot does. This, unfortunately, creates an unfair guessing game where the audience doesn’t get to play along with the clues. There are so many suspects that the film only has time to showcase each actor for one or two moments of questioning. As such, the likes of Josh Gad, Willem Dafoe, Daisy Ridley and Judi Dench feel wasted in a film where most of their lines involve answering Poirot’s queries.

Where Branagh’s direction shines best is in his assembly of shots. When Ratchett’s body is first discovered, the sequence is shot entirely overhead with the audience peering directly down at the scene of the crime. In Poirot’s opening mystery, he reveals his findings to a captive audience in an astounding vista shot. For as silly as it is to imagine how it came to be, the climax where Poirot solves the crime with all the suspects gathered is unforgettable in the setting, with Branagh behind a glowing train and the defendants all seated at a table.

I would commend Murder at the Orient Express for being so beautiful to look at, but there’s an unshakable distance with the audience in these scenes. Notice how Poirot’s Middle East mystery showcases more of the landscape than Poirot himself, refusing to let us see his deductive expressions and mannerisms, also making me question how anyone seated in the back of the crowd could hear him without a microphone. And what of the reveal of the Orient Express murder, where we cannot even see look of shock and confusion on the faces of the passengers when seen over their shoulders. Why does Branagh want to hide his characters when they’re all played by A-list talent? All that’s left at that point is the mystery itself which does little to be shocking or surprising past the written contents that are performed more like a dry stage play than an engaging film. Even with the inclusion of avalanches, derailed trains, gunfights, and an extra stabbing, this mystery comes so standardly in a tone that even the alternative resolution doesn’t come off as shocking as it should. Branagh takes this material so seriously as though he were making more of an opera than a movie, resulting in a version of Agatha Christie’s novel that pales in comparison to the other theatrical film and even the Masterpiece Theater TV episode.