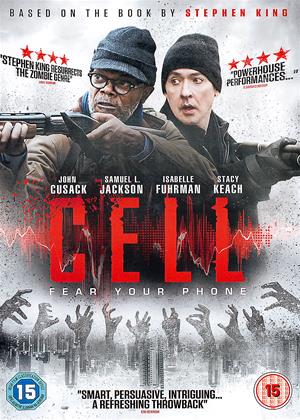 Good to watch, shame about the ending! - Cell review by CS

Based upon a Stephen King novel, this gives us the standard Zombie premise, whilst attempting to put a new spin on a much tired and overused storyline. The film itself is actually quite good and quite watchable right up until the last five minutes that is! The ending tries to give us a twist on what we expect, but fails miserably and instead of giving you one proper ending, gives you three, which simply creates confusion leaving you wondering what actually did happen at the end! It's a shame because this could have been such a good film and is, if it weren't for the last five minutes letting it down!

An adaption of one of Stephen King’s lesser-known books, ‘Cell’ wastes no time in getting things moving. Within minutes, the normal, rational, aggravating general public quickly become slavering, rabid killers. John Cusack, all Botox and hair-dye, stars alongside un-augmented Samuel L. Jackson as Clay and Tom, two bland but well-played people thrown together by the conflagration.

I haven’t read the book on which this is based, but I notice King is the screenplay’s co-writer. The reason for the mass transformation into zombie-types (they revert into twitching human-looking killers rather than the more impressive, rotting cadaver variety – Cusack’s plastic surgery makes him look a good deal less natural than the aggressors) is something to do with their cell-phones: hence the title.

To me, this is what it is: a fairly ambiguous thing to say, I admit. It’s just another zombie film, really. It boasts a decent budget, some effective set-pieces, some unconvincing effects and creatures that rely far too much on hordes of actors gurning than any particularly frightening make-up. It also gets deathly dull very quickly, I’m sorry to say. Little in the way of humour, and despite the lengthy bouts of dialogue, there’s no real character development. It’s all a bit strange and far from satisfying, as if despite King’s involvement, no-one knew what kind of film they wanted to make.

I was tempted to give up on this a number of times, but persevered in order to see if there was any kind of pay-off at the end. There wasn’t.