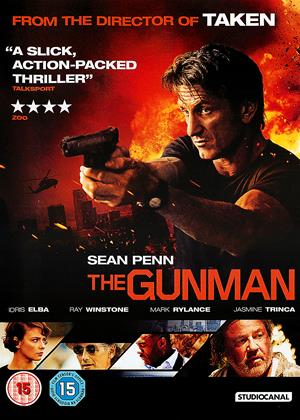 Reviews (2) of The Gunman

This globe-trotting old-school action thriller hits all the right spots. Director Pierre Morel, who also made Taken, directs with a firm hand and a steady camera. The well-paced plot rattles along with barely a dull moment. With so many laughable thrillers in the John Wicke mould around, it’s good to see some tense set-pieces with realistic action and resourceful baddies who can shoot straight. Even the climax manages to be both silly and exciting at the same time.

With a more charismatic leading man The Gunman could have been a classic of its kind. A beefed-up Sean Penn nevertheless manages to carry the part and it’s fun seeing Mark Rylance trying to play a baddie. Not a classic in the manner of the first Bourne film, but a solid four-star thriller vastly underestimated in the States. Pierre Morel is building a formidable reputation for this kind of realistic action thriller. If only he could have replaced Greengrass on the later Bourne films…

Bourne-Lite - The Gunman review by TR

A world-weary Jason Bourne clone globe-trots and duffs over bad guys en route. Decent enough, but can't hold a candle to THAT franchise. What possibly can??

Sean Penn and Javier Bardem are some very talented actors, but even they can’t elevate something as incoherent and dry as The Gunman. Either they’ve fallen on hard times or they have made a mighty bad decision to star in a picture better suited for desperate C-list actors to remain in the limelight. I could just imagine such a script being the perfect platform for a washed up action star to pay his bills. But Penn and Bardem just appear out of place for being in an action picture that doesn’t play to their strengths. They’d have better luck taking on a slasher horror picture.

Penn and Bardem play black-ops mercenaries Jim and Felix working undercover as security for local construction in Congo. Jim has formed a romantic bond with local doctor Annie (Jasmine Trinca), but it’s a relationship that breeds seething jealously from Felix. The love triangle is cast aside, however, when they receive their mission to assassinate the Minister of Mining. Jim takes aim from a distance, makes his kill and disappears without a trace. Fast forward years later and the mercenary finds himself being targeted by the organization that hired him. He tracks down his comrades that may be potential targets and finds that Felix has married Annie. Just as the triangle heats up once more, the three find themselves under fire. The story pretty much writes itself from there with Penn running from hitmen and trying to save Annie acting as the damsel in distress.

This is by-the-numbers action movie plotting loading up just enough government cover-up antics to counter the fight scenes. The characters are staged too simplistically and the actors do their best to make them just a little bit more. Javier Bardem plays up the poorly written Felix who marries Annie out of both jealousy and spite. Annie just sort of goes along with it to be grateful as Felix proceeds to get ridiculously drunk and gloat. Bardem is acting his butt off, but it’s a role that just doesn’t suit him. Nor does Penn embody the action hero model despite his best efforts to fill the pants of Liam Neeson. He’s likable in scenes where he’s just trying to be a normal guy, but feels very much out of place when threatening bad guys over the phone or punching them in the throat.

The action scenes have some decent staging to them, but rarely have a driving sense of a thrill. Penn is cornered in a flaming bathroom and uses a wet towel to dash out of the fire, grab a grenade, throw it at the enemy and then run back into the fire for cover. There’s some intelligence to a scene like that, but not the kind that entertains. You’re mostly just watching Penn go through the motions of a plot where he has no equal to fight. He’s left to trade bullets and fists with some slightly stronger tough guys and feeble conspirators. Idris Elba pops up as well for a solid scene with Penn, but it’s mostly just to trade stock spy dialogue acting as an INTERPOL agent.

It’s amazing how director Pierre Morel could go from directing the gritty Taken to this mundane stroll of an action picture. The finale takes place at a bull-fighting arena in Spain where Sean Penn and bad guy Mark Rylance play a game of cat and mouse. The bull is shown several times and you know that the bull is going to gore someone at some point. We see it coming, it’s given plenty of anticipation and it does deliver on its promise. But when you can see a kill coming a mile away, is it really all that exciting?

From its lazy title to its bland plot, everything about The Gunman feels generic and forgettable. In the realm of over-50 action starring vehicles, this is a misfire of a picture that somehow roped in some talented actors to go along with it. Whether it was the allure of making the next Taken or the appeal of a script based on a French novel, whatever promise presented was dead on arrival - wasting all the talent on screen. This project is beneath such actors that it makes you wonder how desperate they are for better roles. I can only hope that this is the lowest they’ll sink and bounce back with a better picture. I’m not too sure how I’d feel about Penn and Bardem starring in the next sequel to The Expendables.