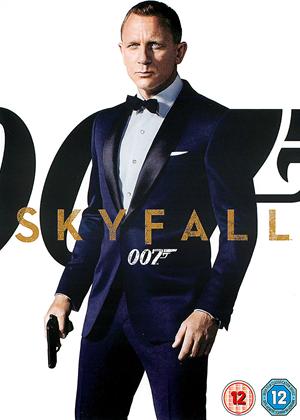 When I saw this at the cinema I thoroughly enjoyed it. But watching it now at home I felt slightly disappointed...

Where is the glamour? Where is the excitement? Where are the under-dressed Bond-girls, the over-the-top baddies, the gadgets, the not-so-subtle one-liners, the exotic locations?

This latest Bond is missing just about all of these: it's more down-to-earth, in fact somewhat more down-at-heel, and despite its large budget looks as if it was made on a shoestring. There are some awful props and effects with the MI6 HQ explosion being the worst and baddie Silva's roomful of compute-power running it a close second. The characters are a bit wishy-washy with Javier Bardem exuding the megalomaniac power of a turnip, and the two love interests (the Eve Moneypenny and Severine characters) the seducing power of limp lettuce.

And the story is hardly original either. A list of agents is stolen, putting them in danger. Err - haven't we seen that many times before?

I also disliked the obvious product placement (VW-Audi, Heineken, Omega etc). The 'real' Bond doesn't drink lager from the bottle, let alone in bed - Bolly or better for that, surely.

This is Daniel Craig's third Bond film and while his characterisation revitalised the franchise in 'Casino Royale' the two later films have been less good. It must be tricky keeping the stories fresh after so many films (what is it, 25?) so I understand the problems, but Mr Craig is already starting to look a little past his prime :(

If I'd rated it after seeing it in the cinema I'd have given it 4/5 but having seen it again it's down to 3/5 stars. Not bad, but regrettably not excellent.

Is this really James Bond? - Skyfall review by WP

If you are used to classic Bond movies you may find this film hard to swallow. Is it Daniel Craig's fault - no he's doing the best he can with a script that gives him no cool one liners or that comic wit so apparent in other Bond films. The girls aren't there either, nor those amazing gadgets, and worse still Bond loses his cool and gets angry - he never loses his cool, not Ian Flemings Bond anyway.

I wonder what Fleming would think of it? Maybe it's time to drop the Bond tag.

Best level of acting in any of the series.

My favourite line in the film is from Albert Finney  the gamekeeper, Mr. Kincade, at the Bond Family's Skyfall estate in the scenic highlands of Scotland:

For me not edge of the seat Bond, but more of a transitional film for some of the key characters.

Hopeful of better next time.

Bond is back, literally. Presumed dead for three months England’s finest spy 007 returns to save the boss and mentor that ordered his death from an ex-spy disillusioned by his treatment and the failures of the British government to protect him in the field of duty.

In his third appearance as James Bond Daniel Craig once again brings class and intensity to the screen, helping this most recent imagining of Bond become that much darker and grittier, whilst the storyline manages to walk that thin line between complex and gripping.

Without giving too much of the story away Bond returns from a brief hiatus to discover that a terrorist is targeting MI6 and its leader M (Dame Judi Dench), despite a rather unsettled relationship between them Bond takes it upon himself to protect M, as you would expect this involves a beautifully flash car, some rather exciting weaponry and a very suave way with the ladies.

What I have really enjoyed about the more recent Bond movies is the way in which they have managed to re-instil a sense of seriousness and believability into the characters and stories, for some time the Bond movies became a bit camp, predictable and just a little bit silly. Skyfall in particular has managed to pull itself back, almost acting as a re-reintroduction to the Bond franchise, replacing and reviving characters and bringing the series crashing, albeit stylishly, into the 21st Century.

The reflections on the old and the new is an inherent part of the Skyfall story and as a theme perfectly compliments the overall mood of the piece; the film successfully utilizes intelligent and tongue-in-cheek humour to make cracks at all things past and out dated whilst simultaneously casting a light on the wasteful and harmful social tendency to discard anything deemed too old in a culture of constant invention and development.

Couple this with an absolutely stunning cast and some fantastic – yet not over stated – visuals and effects and I could honestly call Skyfall the best action-drama film I’ve seen in years.