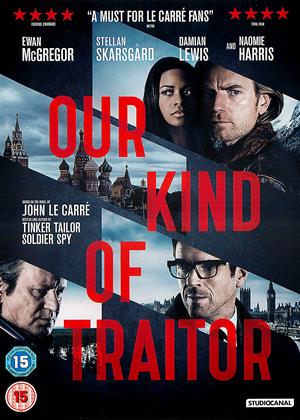 Sign up
Dead in a Week: Or Your Money Back

Reviews (9) of Our Kind of Traitor

This good feature film focuses on the Russian mafia. It is quite well made and everything should work to make it really good but, somehow, it fails to hit the mark. It is hard to know why. All the ingredients are there but it is not as good as it could be. And yet the plot is strong.

One reviewer said it feels more like 'a TV film', and that's perhaps what it is. Of all the characters, the only one that really grabs one's attention is Dima (Stellan Skarsgård), the Russian mobster who fears for his life. The violence is often suggested rather than shown, which could have worked but seems, somehow, to deprive the film of those moments of high drama one would expect.

Somehow, it is quite a cerebral film.

So, it is worth seeing, but could just as well be missed.

Watchable but oddly limp, plodding film with stellar cast - Our Kind of Traitor review by PV

This film should be better - a great writer (John le Carre) and a superb cast. However, something doesn't quite gel and I never felt really connected to the characters or cared about them. Maybe it's the direction? Not sure.

Anyway, the story strains credibility on several occasions - we're expected to believe that violent Russian gangsters can overnight turn into good caring fluffy bunny types. We're also expected to believe the Ewan McGregor character (a university poetry lecturer) would be married to a high-flying black lawyer. Sorry, but that's so unlikely and to affect my willing suspension of disbelief (essentially when watching any fictitious drama). I am sure John le Carre did not write it like that.

So, all in all, this is an oddly limp affair. My reaction to it is 'meh'.

And the Russian mafia are a lot nastier and less slick than portrayed, though there is much truth in the way they clean money in the City of London.

Lame-ish Spy Thriller - Our Kind of Traitor review by MD

Yet another film based on a John Le Carre novel, this boasts an impressive cast, yet strangely that combination just does not work on this occasion. Early on, you get the feeling that the set-up is highly contrived, and certainly the way in which a very ordinary university professor is sucked in to the murky world of espionage, mafia money laundering and government level skullduggery is pretty hard to believe.

The middle part was a muddled mix of clues, laboured exposition and gory action scenes that left me not just a little confused but also wanting more coherence - there was no real continuity, and the actors seemed at times to be as lost as I was.

Unfortunately, you could see the ending coming a mile off, but as always these days there was in fact a double ending, you know, the happy bit to offset the fact that everything went belly up first time round. I actually hated this ending: not only was it a cop out, but it was so briefly done that you were left hanging in the air. It kind of summed up the whole movie - badly handled, and inept.

All in all, I'm afraid, a bit of a waste of a potentially good story and a great cast.

Dull spy tale - Our Kind of Traitor review by Alphaville

A slow-burning, lo-key, sub-par Le Carré in which a poetry lecturer gets involved with a Russian mafia boss wanting to defect. It’s all pretty ho-hum with no twists and turns, little excitement, boring politicking and nothing we haven’t seen done better many times before. An hour passes before our hero is in any peril at all. Pedestrian direction from TV stalwart Susanna White and a bland score add a sheen of sameness to every scene, but even Bernard Herman would struggle to add any tension to this one.

Spot the Harry Palmer/Michael Caine character. Could never see the Bond girl as any good at at being on screen. Is really a TV film, but is not bad to be fair. Could be 2.5 stars to be fair...........

Not as good as hoped. - Our Kind of Traitor review by TB

I found this film rather boring and predictable, with few re deeming qualities. It had little suspence and although the cast was excellent, this film could have been so much better.

a big let down - Our Kind of Traitor review by OP

I agree with a previous review that this film should be better than it is - It emanates from a brilliant writer (John le Carre) and and the cast is superb. But you do not get a feeling of connection to the main characters and don't come to care about them or what happens to them. The lead male character is rather wet and you cant help wondering why how he managed to get such a brilliant wife (and keep her!). The plot is quite ridiculous and unbelievable. I was very disappointed because it could have been so much better!

Not Taught Enough - Our Kind of Traitor review by KW

Interesting Movie script let down by trying to add an extra 20 minutes to the run time. Decent acting from the cast and some of the location shots were great but they were not enough to make the film a good one.

Flat spy thriller - Our Kind of Traitor review by AER

After a promising start, nothing convinces in this flat thriller. Characters exist to serve a plot that just drives a well-furrowed path. If you like JOhn Le Carre, this is the weakest film adaptation for some time. The actors are asleep, the locations wasted (except for the Alps) and the characters seem to be very black and white in their ways - good and evil. Stellan Skarsgard's character would have benefitted from a bit more development, and the central couple are barely present. Only Damian Lewis distinguishes himself as a spy with a grudge and a personal reason to see his unsanctioned mission go to plan. Below average - stick with Tinker Tailor Soldier Spy or the TV adaptation of The Night Manager.