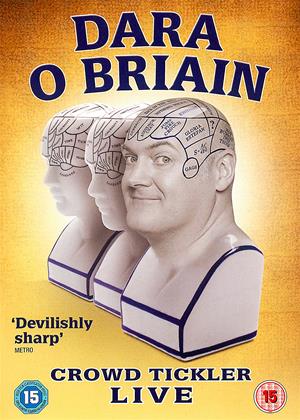 The immediate thing that strikes you about Dara O'Briain is how pleasant and engaging he is, in a way which makes him exactly the kind of person you want to hear amusing anecdotes from, in same the way that "alternative comedians" weren't; that's why Ben Elton made far more money from writing that Abba musical than he ever did by shouting about how bitterly he hated Thatcher, and younger readers will probably have to google "alternative comedy" to find out what it was.

This DVD illustrates that point very well. When Dara's sticking to what he's best at and simply being a nice man telling you funny stuff, he's very funny indeed - his routine about the questionable value in later life of the kind of things parents teach pre-school children is brilliant observational comedy. Where he goes slightly wrong is the edgier stuff. It suits some comedians, but not him. Whenever he throws in a bit of "adult" language, it seems forced, as if he felt that the audience might not feel they were getting proper grown-up entertainment without the requisite amount of swearing; and the "things men find sexy" routine doesn't quite work, partly because it includes some oddly repetitive punch-lines which Dara seems to think need to be told multiple times before the audience will admit they're funny. The same goes for the moderately amusing bit about "The Return Of The Jedi", the not particularly brilliant conclusion of which is repeated so often that it looks as though he had to drag it out because he was short of material.

And he definitely should have omitted the long and almost entirely unfunny true story about how he accidentally risked his life doing something pointless for Comic Relief. Apart from sounding a bit smug, it leads up to a punch-line so feeble that he has to tell the mostly English audience in advance that it's really a killer line if you're Irish and understand the historical context. I'm sorry, but that's the kind of thing Steve Coogan's inept stand-up comic persona Duncan Thicket would do! Dara might as well be telling a Jewish joke that requires him to stop in the middle and explain to all the gentiles in the audience that the gag works far better in Hebrew.

The material in this 90-minute performance varies from two-star to four-star, with maybe even a few moments of five-star, but it could do with being more consistent. However, overall Dara's pretty funny, and sometimes he's very funny indeed. It's not genius laugh-till-you-fall-off-the-sofa comedy, but it's easily good enough to do its job of amusing you for an hour and a half.