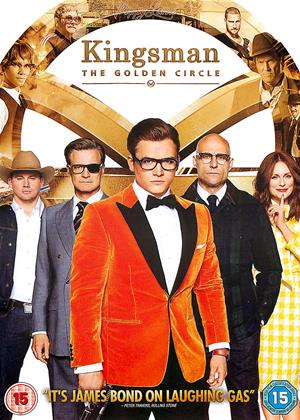 Reviews (21) of Kingsman: The Golden Circle

I really liked the first film, it was very watchable and good harmless entertainment. This though, is just a sequel for the sake if it, a parody of the original. A silly plot, masses of cartoon like violence and a pointless GGI fest. Don't even mention the Elton John bits which consist of him mainly shouting "f***" very loudly for no apparent reason.

Because "Eggsy" has a much larger part, his irritating Jafaican accent gets very wearing, while Keith Allen was in it for all of 3 minutes - why? What was the point? Halle Berry was also curiously mis cast, although it looks like she is being set up for Kingsman 3. Me, I'll be giving it a miss on this evidence.

not as good - Kingsman: The Golden Circle review by NW

Don't waste your time - Kingsman: The Golden Circle review by IT

Enjoyed the first film, even if it was a bit over the top.

This one beggars belief, it really is that bad.

Watch the Test Card instead!

Terible. Gave up and sent back unwatched - Kingsman: The Golden Circle review by rh

i wish I had seen the reviews before renting this pile of nonsense. Some great actors with nothing to do but collect their cheques

I saw the first Kingsman movie and thought it was just SO absurd - but then I am not a teenager raised on video games.

This is all cartoon violence reminiscent of the Beano but with more blood and explosions.

People get zapped; surreal scenes show cartoony martial arts fighting done with CGI; a ludicrous plot develops with goodies and baddies. So far so good. All watchable - just. It is what it is.

The action takes place all over the world - even at the Glastonbury festival - and features some top actors (no doubt loving the 7 figure pay cheques) plus Elton John (looking all his 70 years) plays a cameo caricature of himself. Whether that is a good or a bad thing is moot.

The chav white-acting-black English of the main character is spot-on, sadly - I hate this modern ugly inner city multiculturalist speak, though it is confined to poorer whites on London council estates. And 'Oh my days' makes these people sound like old aunties!

One flaw in this is that the baddies actually have a point - surely wiping away drug dealers and users responsible for most violent crime would be a good thing?

Anyway, watch this and go along for the ride - just don't think too hard or try to make sense of anything, and it'll all be over in 2 hours.

Same formula as first film, with some more drastic graphics/PC-generation etc. Bit of fun. Mark Strong needs to get back to Guy Ritchie and do the promised Real Rockanrolla

maybe not as good as part 1 but entertaining and fast paced .beautifully choreographed fight scenes, clever use of camera angles and slow motion . a Good Evenings Entertainment . all that and Cute Puppies too !

The film opens with an exciting car chase that’s so well conceived and shot it’s almost in the same league as the one in The Villainess. But it’s downhill from thereon. The boring drugs plot meanders and loses focus. Our hero Eggsy is just as bland and difficult to engage with as before. Colin Firth’s character is resurrected from the original film but is only a shadow of his former self. Chief baddie Julianne Moore has virtually nothing to do. The dialogue is for adolescents who think swearing a lot is cool. You know the barrel is being scraped when an excruciating Elton John has a sweary bit part as himself doing kung fu kicks.

After the exciting opening the rest is played for failed sub-Bond humour. It’s almost a parody of the much better original. There’s a well-choreographed fight sequence at the end that brings back fond memories of the church sequence in the original, but it’s far too late to save the film. Two stars plus one for the beginning and end sequences as well as a ‘Making Of’ DVD extra that shows how the car chase was constructed.

This is a truly dreadful sequel. The first Kingsman movie was just about watchable, but this is just embarrassing. It makes me wonder why an actor of such calibre as Colin Firth, would take the money to appear in this.

Enjoyed every minute of it. - Kingsman: The Golden Circle review by LJ

Very good film but at times did wonder if there was too prolonged fighting. Did enjoy it though and hope there is a follow up to it.

Oh what a shame - Kingsman: The Golden Circle review by AL

I really had hoped that the vibe I'd heard was wrong, unfortunately not. Good beginning and then down hill. Way too long, "story" was all over the place and an extended cameo from a national treasure was excruciating. Such a shame, but they'll probably be another one.

The sequel to Kingsman doesn’t make any attempt to instill a more James Bond-like dignity. If the previous film with its exploding heads was considered dumb, The Golden Circle is super dumb with its robotic dogs and bodies in meat grinders. Its story is too ridiculous, its action overblown, and depravity at its highest levels that crosses a line or two. In other words, the lesser sequel.

That’s not to say Golden Circle doesn’t have its golden moments. There’s a little bit of that zing left. Eggsy (Taron Egerton) returns as a more competent spy, armed with high-tech cars and weaponry. But he’ll lose all of that when a new terrorist threat plays the old game of sequel clean sweep, leaving only special agent Merlin (Mark Strong) to help him. With the Kingsman base gone, they hightail it to America for an even more outlandish secret agent society run out of a whiskey company. It’s a neat idea, but not exactly all that clever, considering one of its agents is Jack Daniels (Pedro Pascal) and Tequila (Channing Tatum).

The new villain is an odd one, the wealthy Poppy (Julianne Moore) who likes to run her drug cartel with a 1950s flair. Just because her operations are run out of the jungle doesn’t mean she can’t have diners, milkshakes, and hamburgers. And robotic dogs for some reason. I guess they’re easier to take care of than living ones. Her master plan is to infect the world with a drug that will exterminate life for those unwittingly took her substance and use it to hold governments hostage to make her drug selling less illegal. Her plans and themes seem all over the map, from the branding of her cohorts with a circle of gold to the celebrity hostage of Elton John who will play for her whenever she likes.

This film is a chaotic mess, from random insertion of Elton John songs to planting a tracking device inside genitals to the extremely clunky means of reviving Colin Firth back into the series. But what saves most of the film is the commitment to the audacity, mostly from the actors. There’s no reason for Firth to come back into this series other than his natural charm and chemistry with Egerton. There’s no reason for Elton John to play a role in the climax other than cracking some silly jokes, but, man, is he fun to watch kicking bad guy butt. The action sequences merely double-down on the fast pace set by the previous film’s church massacre, still looking good if not feeling too familiar.

There are far too many players in this story that few get to shine as well as Firth, Egerton, and Strong. Pedro Pascal has his moments of fun the way he battles with an electric whip, but Channing Tatum is tough to watch, touting a shotgun with a severely lacking southern accent. Halle Berry is pleasant to watch as a nerdy special agent but there’s so little of her that I was thirsty for more. And the inclusion of Jeff Bridges as head of the whiskey secret agent base is certainly fitting but never fully realized. I will give credit to Bruce Greenwood, however, who does an exceptional job playing a cocky and full-of-himself President of the United States, far more concerned with his job than the American people.

The Golden Circle certainly won’t have fans of the original salivating for more but there’s such a bombastic nature at play that it’s the most explosive and over-the-top way to end this saga. It depletes all remaining ounces of zaniness, graphic violence, and ludicrous plot developments to make it a love it or hate it film, ensuring the prospect of a third film to be dull with repetition. This is one more round that is so sour you’ll either wheeze with delight or spit it out in disgust. At any rate, it’s the last call for Kingsman.