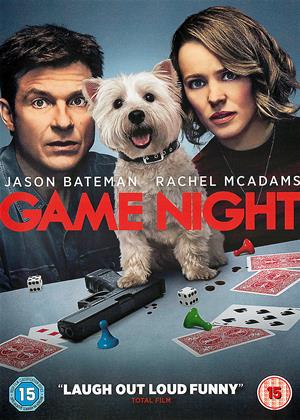 Average but doesn't get any better! - Game Night review by CS

I wasn't sure what to expect from this film, thinking that it was going to be a comedy based around a Murder Mystery Party. Games Night is just what it says, a film based upon a couple and their friends taking part in games nights, to the point of obsession and extreme competitiveness. I shan't dwell upon the plot for fear of being a killjoy, but there are too many twists and turns for convenience sake and I didn't find this very funny at all, lots of jokes, but most of them are quite bland and while it was an ok film to while away an evening, i did find my attention constantly waning! This is one of those films that starts off promising, you think it's going to build and get better and you start trying to work out the plot and guess what's going to happen next, but then it simply doesn't get any better!

Not great, the actors all seem to ham it up, they're all completely hyper for some reason and it feels like they're trying too hard although it is well filmed with high quality production. I must confess that I ejected the disc before the end. It just feels like a parody of a much better film called The Game with Michael Douglas - watch that instead.

Didn't watch it as I was told it was not good! I sent straight back, a lot of poor movies being made currently.

0 out of 12 members found this review helpful.

I have to say I really enjoyed it. I had no idea what to expect but was pleasantly surprised by how much fun I had watching it. The cast are clearly enjoying themselves, have great chemistry and the whole thing skips along with verve. Superbly edited and well written, I found it a surprise joy.

Not our taste at all. Gave up after 20 mins. Dialogue lacking in intelligence and bizarre storyline.

Couldn't get into this movie, silly and part humorous, but not for me. Maybe I'm too old (69) to watch this sort of film

and more suited to the young. No more I can say.

Jason does his normal professional job. Same in every film with the incredulous staring etc. He does it well. The rest is light and fluffy, and not too banal, although there are huge holes in the vague plot.

At least they dont swear all the time!

Not a bad premise but after a fairly promising start the film just falls off the edge of a cliff in regards to both laughs and action. A completely non-sensical plot and far too many jokes that fall flat.

Special mention though for Jesse Plemons who is by far the stand out cast member.

Nor with your time - Game Night review by Nd

Just The House with Will Ferrel, this movie is the complete opposite ofbThe House, because Game Night starts off really promising but leaves you hoping the entire movie it will get good, but it only disappoints all the way. The House on the other hand starts really really slow but becomes and overly fun movie to watch, so. Don't waste time on Game Night, add The House to. You your list t instead

Where other dark comedies turn into a toxic mess of unlikable characters and gags for the sake of gags, Game Night is a film that feels grounded with rules and charm. It takes the time to not only setup an interesting premise, but also offer up an ensemble that exist as human beings and not joke machines. And when a film tries to present likable characters, it’s a little easier to enjoy the absurdity of them running around town and trying not to be killed.

The film centers on the couple of Max (Jason Bateman) and Annie (Rachel McAdams), a couple that loves party games to a radical degree. They met at bar trivia, bonded over Pictionary, and had their marriage reception with a Dance Dance Revolution arcade game. They love a good competition, except when it comes to conceiving a child, making their climb to the next level of their relationship the toughest of challenges. They try to take their minds off of it with their usual game night with friends, but those events are overtaken by the arrival of Max’s successful brother Brooks (Kyle Chandler), a man who loves to rub other people’s noses in his spiffy sports car and decadent home. So you can imagine how peeved Max would be when Brooks not only infiltrates game night, but recommends the next one be hosted at his place.

In the lead up to Brooks’ game night, there’s an ever-present foreboding atmosphere that something nasty is about to go down. The next door neighbor of Max and Annie is Gary (Jesse Plemons), a recently divorced cop who doesn’t seem to be all there, constantly carrying a dog in his arms as though he’s auditioning for Silence of the Lambs. Brooks states his plans for his own game night with an ominous tone, favoring a playful murder/mystery activity that we know will go wrong. It does, but not from swaggering down a predictable path. What starts as a night of games quickly turns into a dangerous night out of guns, gangsters, blood, and enough twists to one-up a Boy Scout.

While there are certainly plenty of dark and gruesome laughs to be had, including scenes of an impromptu bullet removal and accidentally bleeding all over a dog, Game Night manages to avoid the major missteps of such a formula by making us care about the characters past their funny lines. While we get to know a lot about Max and Annie with their fears of entering into parenthood, we also have amusing side arcs for their friends. Lamorne Morris and Kylie Bunbury play a couple that have been together since their early school days, but their relationship is placed on rocky ground when it’s revealed that Kylie’s character has slept with a celebrity, leaving Lamorne a puzzling mystery to solve on top of the current one. Billy Magnussen is the player of lesser intelligence that always seems to invite the dumbest of blondes to game nights, only to hit the jackpot one night with an Australian girl (Sharon Horgan) far too intelligent for him. We don’t get to know much about the villains, with Michael C. Hall playing your standard mob leader of sinister intent, but that’s fine. We know enough about our heroes to root for them to push through this most violent of game nights.

Game Night not only has a lot of fun characters to follow, but also a finely tuned presentation. Every moment of violence and mystery is treated serious with an earnest tone, never trying to contort the atmosphere to harp on the comedy. The synth soundtrack by Cliff Martinez only enhances the tone further with tracks that create the brooding sense of dread in between the hilarious bickering and slapstick. Even the theme of game night is implemented with creative flair, as every establishing shot seems to be framed with miniature game pieces, perfectly designed and position so that they could almost fool the eye. All of these little touches prove that you don’t need to flip the table or break all the rules to stage a pleasing dark comedy where I didn’t mind the plethora of twists as the story wound down. It’s a comedy that is sure to garner big laughs from anyone who wants a film that touches on adults entering into parenthood, plays fast and fun with a caper, or just wants to enjoy the absurdity of Rachel McAdams waving a gun around like a lunatic.