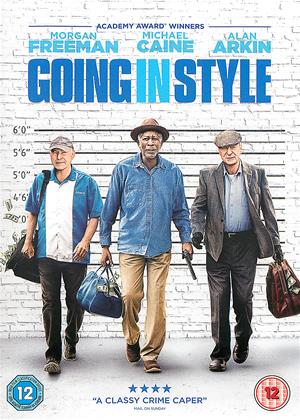 Reviews (8) of Going in Style

Despite being some great actors found this film very mediocre. The acting wasn't great and the storyline predictable and boring. Felt it was similar to other movies with older guys going on adventures but not as well done - wouldn't recommend.

Better than I expected to be honest. OK, it's a bit lightweight, and the plot's a bit silly, but it's well made, Michael Caine is good, and it's overall a feelgood film.

Well always a pleasure to see great old actors still working - especially male ones in this #metoo manhating age. Though sadly, that has infected even this movie, with 2 or the 3 old men having daughters with one grand daughter (one should have been a son at least!).

Some laugh-out-loud lines in this though, occasionally.

Kirk Douglas and Burt Reynolds (I think) did a similar old men fight back film in the 80s/90s. There have been a few.

Some massive plot holes. The FBI here seem not to know how to access mobile phone records, and DNA testing (first done in England in 1986) doesn't seem to have reached Brooklyn yet! The idea 3 old men could rob a bank like that is absurd anyway - there is SUCH security now that shutters would fall at the first sign of a robbery, plus ink spray on notes which all have individual serial numbers as new notes (so couldn't be even given away).

All very silly and unrealistic - a total wish fulfillment fantasy, getting back at the banks for the financial crisis.

SO maybe watch this together with the great drama about the 2008 crash MARGIN CALL, or other similar movies showing the more serious side of repossession and mortgages given by banks up till 2008.

This is all good fun, a contrived comedy with no serious injury of bad things - a fluffy cuddly Friday night popcorn movie.

A pretty enjoyable caper! - Going in Style review by ABC

Not world changing by any means, but Michael Caine and Morgan Freeman are always good value.

Another geriatric heist - Going in Style review by AS

According to movie makers the world is overrun (or overshuffled) by old geezers who one day suddenly acquire the skill and vigour to knock over high-security banks.Here's another superannuated trio doing their stuff. Writing and direction keep this effort moving along somewhat faster than the pensioners portrayed by Freeman, Arkin and Cain, who seemingly phoned in their performances, took the money and ran (or hobbled) back to their old folks' homes. There's nothing new here, but if you appreciate the laid-back technique of the three principals you probably won't dislike this creaky caper. Two plus points: Ann Margaret (never ask a lady's age) as attractive and sexy as ever; Chistopher Lloyd, barmy as only he can be.

So So - Going in Style review by JD

OK, its fun and the caper is well done but the movie is not very memorable.

Not a bad movie - Going in Style review by Stevo

Enjoyable movie if a little farfetched in places, all three main characters do a good job and make the film, some funny moments, even at their age they could have done some of the scenes a bit better and more convincing, defo worth a watch though.

Light weight but a great cast and worth watching - if not particularly memorable. Best not to compare with other fils these great actors have been in!