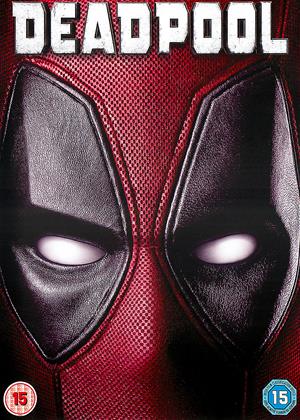 The epitome of modern cinema - Deadpool review by MD

Call me old-fashioned (and I'm sure many folks will do much worse), but this film struck me as the ultimate modern movie - utterly slick, very clever in a way, and using an in-your-face script and every movie trick imaginable to maintain its high octane entertainment level throughout.

Trouble is, if you are old-fashioned like me, it's all utter rubbish. The totally OTT violence, the endlessly repetitive bad language, the gratuitous sex, the crass main character, the ridiculous plot, etc, etc, do not do a damn thing for me, no matter how cool/exciting/smart we're supposed to believe it all is.

So, I'm sure many folks will enjoy this, but just make sure you know what you like before renting it. It may be a 2 hour delight, but it could equally be two hours of hell.

I just laughed all the way through - Deadpool review by CC

It's nice to see a film that manages to both send up and yet be a crucial cog in its format, at the same time. This is a great addition to the Marvel universe and yet it relentlessly rips the **** out of X-men franchise all the way through.

It's funny, sweet, crude, exciting and generally all round great.

Warning - contains several shan pop-earworms of the eighties which will haunt you for days. I'm still trying to eject Careless Whisper from my brain's internal jukebox.

If you like Grimsby, and like Spiderman, may wonder what is happening to Ryan here. Pretty direct hits below the belt throughout.

If easily offended by coarse behaviour and bad language.....you will be offended for sure.

Is comedy in the Jackass methodology.

Baron Cohen could, in fact, have had a fair stab at this, but was probably doing Alice through the looking glass at the time.....no pun intended.

I’m not a big fan of superhero movies, which is why I rather enjoyed this movie. It had its tongue firmly in its cheek with juvinile humour throughout but it wasn’t short of great action scenes also. A refreshing change and a great mix up of superhero and comedy to make something quite appealing. Fun to watch without being incredible. It does what it says on the tin!

This comic take on the X-Men franchise opens promisingly with self-mocking credits, but as soon as the bad-guys-who-can’t-shoot-straight show up we’re in familiar cliché territory. As ever with Marvel, it’s juvenile brainless fare, with nothing going on beneath the surface. It ends with the bog-standard cgi climax. Yawn, yawn.

Nevertheless, the film deserves a couple of stars for at least trying to be different, with an R rating for pointless swearing, a comic sex scene and an out-of-place torture scene. It even makes jokes about other Marvel efforts and breaks the fourth wall, as when superhero Ryan Reynolds moves the camera lens to avoid us having to see him kill someone. A few of his barrage of wisecracks and self-references work, but his sniggering voice-over soon grates. The DVD Extras even feature a cringe-making gag reel that shows how scatter-gun improvised the ‘jokes’ were.

The biggest cheer of the film is reserved for when the chief baddie calls Ryan ‘relentlessly annoying’. Many a true word… It certainly strips the film of any drama that might persuade the audience to care about what’s going on.

Dark, subversive, irreverent and really funny and the film that really cemented Ryan Reynolds screen charisma. This is the Marvel film that takes the comic book superhero and gives him a foul mouthed, immoral and violent personality with loads of wisecracks and a penchant for bloody retribution. Reynolds plays Wade Wilson, a former soldier who now hangs around a bar for ex military taking jobs as a mercenary. His love is prostitute Vanessa (Morena Baccarin) but when he is diagnosed with terminal cancer their lives fall apart. But a creepy guy offers him a cure which turns out to be some nasty experiment by the thoroughly despicable Ajax (Ed Skrein), which results in Wade becoming permanently disfigured but with special powers including self healing. He becomes the classic anti-hero, Deadpool, and sets out for revenge on Ajax. Referencing the X-men films and several other superhero characters, including DC Universe, this is a really entertaining comedy. Sharply scripted, sexy and bold this makes sitting through all those overlong MCU films worthwhile. The 2018 sequel is not bad either although lacks the originality of this.

Very good addition to the marvel universe films. Loads of action throughout the film and some comedy moments. Yes quite a bit of bad language . Not your usual clean cut hero . Looking forward to the next film.

Good but not brilliant - Deadpool review by PC

Okay, it was certainly not the usual superhero movie. Basically a tongue-in-cheek one. And easily forgettable. Only worth 3 stars.

There are at least seven movies in 2016 that are based on comic book superheroes. With their relentless explosions and one-liners, it’s going to be an exhausting year. Thankfully, the first superhero movie of the year is a refreshing bit of satire that doesn’t take itself so seriously. Deadpool is aware of its audience, its formula and its universe, spitting in the eye of each one with a vulgar smile.

The concept of Deadpool is just plain fun. He’s an anti-hero that cracks more jokes than Peter Parker, kills more baddies than Rambo and breaks the fourth wall more than any other movie character in recent memory. His humor ranges from infantile to referential. In the midst of a gunfight, Deadpool takes a timeout to make a poop joke. When addressing the audience about how he got his own movie, he makes cracks about Wolverine. It’s all very silly and juvenile, but there’s just something so amusing about its fearless attitude to break all convention.

But what’s most unique about Deadpool is how refreshing it is for a comic book movie. We have the standard origin tale of Deadpool being a regular guy before a secret test facility curses him with regenerative abilities. We have our obligatory British villain that’s classically evil. We even have a team-up as two affordable X-Men characters attempt to keep Deadpool in check. But the ultimate plot doesn’t involve some lame MacGuffin or a diabolical plan to save the world. It’s a straight revenge tale without any of typical bells and whistles of a superhero epic. You have no idea how happy I am to not see another destructive blue laser or demolished city. Having the climax take place on an old aircraft carrier is a great change of pace.

Deadpool is rated R and earns its rating well. Aside from Deadpool’s potty mouth, there’s a multitude of blood and gore throughout - all of which is approached with a semi-comical tone. Arms detach, heads fly and a body splatter against a road sign. As Deadpool shoves his swords through an enemy’s chest, he pauses the picture to comment on how this isn’t your usual superhero movie. This doesn’t occur until about 10 minutes into the movie, but the audience has already picked on this with the violent car chase. The character is just basking in his divergence at this point.

While Deadpool is incredibly funny, a little of him goes a long way. His constant references to the budget of the picture and the changing of timelines made me smile, but never truly laugh. His vulgar dialogue becomes a bit monotonous by the end to the point where it almost becomes tiresomely lazy. The repetition of certain jokes don’t hold up that well either - a joke about wearing brown pants to be prepared for emptying your bowels is decently funny once, but not the second time around. When Deadpool works best is when he’s given a straight hero to play off of. Any scene where he is paired with the metal-faced Colossus and the angsty teen Negasonic Teenage Warhead (what a name) is pure comedic gold.

Deadpool is the bloody, silly and self-aware comic book movie I never thought could exist in the current formula of superhero movies. And, yet, here it is. It’s a movie that’s smart enough to play to its fans (the opening shot features a nod to comic artist Rob Liefeld) and crass enough to please casual moviegoers. It’s also pleasing to finally see Ryan Reynolds in a role that fits him as perfectly as his costume. The snide humor of the picture makes it teeter on the edge of being a childish mess, but I appreciate the cavalier attitudes of the filmmakers willing to risk so much for such a comic book movie. The landscape is too crowded right now to play it safe and Deadpool playfully gambles all or nothing.