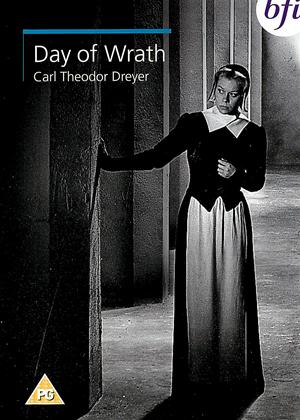 Reviews (1) of Day of Wrath

The Extraordinary Being Here Is Carl Theodor Dreyer. - Day of Wrath review by NC

An old woman is accused of witchcraft. The pastor writes "Having been tortured, to the glory of God, she voluntarily confessed." An old man dies. His young wife and his son from a previous marriage are lovers. "He stands before God and accuses us", the son says. "No, he is pleading for us because he sees how we suffer", the wife replies. God, Christianity, and the Devil are who individuals think they are. God and the Devil have very little to do with it.

The young wife thinks she may have the power of calling, as her mother was said to possess. On the two occasions she tries it, it works, but there are causes in each case far less supernatural than the Devil's work. But this is a time of witch-hunts, fevered suspicions, betrayal of neighbours, friends and even family; and coincidences are not considered at all. Burn first, and don't bother asking questions later. (The film was made in 1943, under German occupation. The parallels hardly need to stated).

Dreyer doesn't just give us a powerful story and characters of complexity, he produces camerawork of stunning vision and beauty. The ascetic interior of the pastor's house is in complete contrast to the Garden of Eden outside, where the lovers meet. A tree, leaning over the water is "bowed in sorrow for us" according to the son. No, replies the wife, it is "in longing for its reflection - we can be no more parted than the tree and its reflection". The silhouettes in these scenes are reminiscent of Lotte Reininger's animation, and become darker, shrouded in mist, as love nears its doom. There are also tracking shots , particularly one which follows a line of choir boys - watch in wonder.

The pursuit of witchcraft, and the persecution of witches (nearly all women, obviously) was seen at the time as God's work. Today, those who believe in God and the Devil should by rights lay the blame on the Devil. Dreyer is surely pointing the finger, both in the time of burning witches, and the time of the Nazis, solely at humanity, or at least a large section of humanity (and not just men, as the pastor's mother exemplifies). To repeat, God and the Devil have very little to do with it.

Performances across the board are so good there must have been sorcery in it.

There are those who place Dreyer's 'The Passion of Joan of Arc' as number one on the list of greatest films ever made, and they have good reason. Every one of his other films is suffused with genius, even down to the short 'They Caught The Ferry'. 'Day of Wrath' is a gaunt, haunting masterpiece.