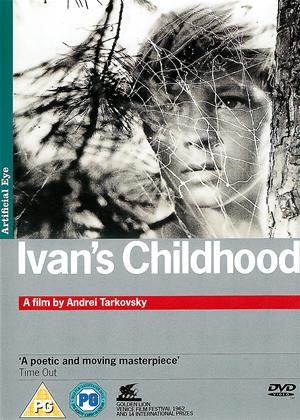 Synopsis:
A determined 12-year-old boy named Ivan joins a Russian partisan regiment as a scout due to his uncanny ability to slip quickly through enemy lines undetected. But as his missions become increasingly dangerous he is pulled from duty, something which he is quick to protest against because Ivan has an ulterior motive - to avenge the death of his family at the hands of the Nazis. Andrei Tarkovsky's first feature film is regarded as one of the most accomplished cinematic debuts and launched the career of the most influential and admired Russian filmmaker in history.
Actors:
Nikolay Burlyaev, Valentin Zubkov, Evgeniy Zharikov, Stepan Krylov, Nikolay Grinko, Dmitri Milyutenko, Valentina Malyavina, Irina Tarkovskaya, Andrey Konchalovskiy, Ivan Savkin, Vladimir Marenkov, Vera Miturich
Directors:
Andrei Tarkovsky, Eduard Abalov
Producers:
G. Natanson
Writers:
Vladimir Bogomolov
Aka:
Ivanovo detstvo
Studio:
Artificial Eye Film Company Ltd.
Genres:
Action & Adventure, Classics, Drama
Countries:
Russia, Action & Adventure, Classics, Drama
Awards:

It's a solid debut from Tarkovsky, it is about an hour and 34 minutes but it feels much longer, I did feel myself getting bored through it though. Ivan is part of the Russian army in WWII and immediately he is seen having strong dreams relating to his mothers death, these are probably one of the strong parts of this film as it shows childhood and how strong he is for his age. He is highly respected in the army, but one of the officers soon informs him he will be sent to a bording military school, Ivan protests this as much as he can but still can't get his wish, so he tells them he will run away. It's a decent film though I feel like the other 4 Tarkovsky films I've seen were much stronger, nevertheless for a debut you can enjoy it and it is more like a sign to come of Tarkovskys powerful images and thoughts, memories etc. Also has a really good ending, although I wont ruin it!

The previous reviewer on here (Oli) has summed this one up quite well I think. I am not convinced it is a great film in itself but there is plenty here to suggest the direction that Tarkovsky would subsequently take. I must say that on a second viewing I enjoyed it a lot more - like Oli, I did get a bit bored first time through. On second viewing, when I was able to concentrate more on the filmmaking than on the plot, I saw a lot more to like and fewer flaws. There are still some significant flaws though, I think. In particular I find the subplot/love-triangle between Masha, Kholin and Galtsev rather tiresome and it keeps Ivan (the soul of the film) off screen for too long. I really dislike the highly choreographed scene in the woods with Kholin and Masha. To me it felt like a purely technical exercise, rather than being in the service of either the story or the ideas in the film. I also have some reservations about the dream sequences which are maybe just a touch heavy-handed (understandably for a first time director). If my memory of the other Tarkovsky films I have seen is not deceiving me, I think that they managed the blurring of time/space/dreams/reality etc much more subtly than this.

All of that said, there are many good things about this film: Nikolay Burlyaev is brilliant as Ivan, equally adept in the scenes depicting an idyllic childhood as in those showing him as a vengeful boy soldier; almost every single shot is composed in an interesting way and there is some beautiful imagery, particularly in the mist-covered swamplands and in the desolate remains of destroyed buildings.

I am hoping to work my way through Tarkovsky's films in the next month or so (although the 178 minute long Andrei Rublev is slightly intimidating) so I am interested to see which parts of this film are developed and which parts are left behind.