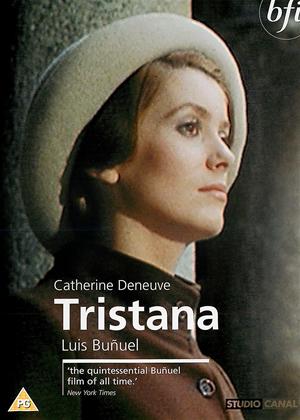 An exploration in frustration - Tristana review by PB

Tristana is not untypical of the Bunuel oeuvre in that it's an exploration of frustration and thwarted desire, the film also examines liberal value systems and how such can be distorted and perverted by lust, economic hardship and so on. If you like Bunuel you'll find the film an immensely enjoyable piece of cinema. If you like action movies then you are advised to steer well clear. Don't get me wrong, there's plenty of action here but not many car chases.

Fernando Rey who plays don Lope, is outstanding as the liberal atheist who takes a more than parental interest in the orphaned Tristana (Catherine Deneuve) who comes to live with him following the death of her mother. As the young naive and very atttractive Tristana, Catherine Deneuve is also outstanding, fleshing out especially well the development of Tristana's character from initial docile acceptance of her situation (literally in the grubby hands of don Lope) towards open rebellion and the bohemian life with a young artist, and then, following the amputation of a leg and a return to the house don Lope, the cold and calculated vengeance of an embittered older woman on the now much older man.

For Bunuel fans this film is a must - but they will already have seen it a dozen times. For those who have yet to be ensnared, I suggest you give Bunuel a try - he is an acquired taste but once acquired there is no looking back.