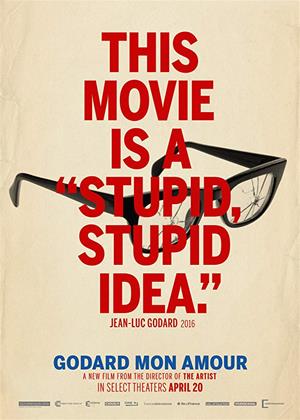 I’m sure there was some glee taken in promoting a poster with a quote where Jean-Luc Godard declares this biopic to be a stupid idea. But there’s more truth than smirks in that quote for a film that never screws on a deep or detailed lens of Godard’s life, dancing around his films and never getting the full view of his shifting mindset. Even with Godard addressing the camera directly to break the fourth wall in a handful of scenes, I still couldn’t help but feel there was a distance with the subject of the legendary director.

Notable inaccuracies are going to drive Godard scholar’s nuts. Godard, played by Louis Garrel, doesn’t embody the famous director’s spirit, appearing less like the figure and more like a French Woody Allen on tranquilizers. Even in scenes where he starts joining in protests, chucking rocks at the police force, he better exemplifies that aged hipster, past his prime with a voice too raspy and choking on commercial success to sound as bitter. His second wife, Anne, is played by Stacy Martin with a bob that seems to better portray his first wife. Some commentary on Godard’s insistence to mold her into his dream girl/actress? Honestly, I think the director just likes shooting Stacy in this manner.

Director Michel Hazanavicius (The Artist) tackles the messiest period of Godard’s life, based on the book written by Anne herself. We follow the director from the moment he decided that he didn’t want to make acclaimed and artful films and keep a firm aim on the cultural politics and revolution of 1960s France. Told almost entirely from Anne’s perspective, we observe from her point of view how Godard made the change from the director from revolutionary. While it is interesting to hear her thought on how she was dragged through protests and attended many events where Godard was booed for his position, there’s a firm desire that film would stop balancing the two and give one of its subjects a firmer focus. Godard is interesting, but never see much of him outside of Anne’s company, never delving into his filmmaking. Anne is also interesting, but we don’t hear as much of her thoughts as I’d like, until they eventually spill out in the emotional climax.

While there’s certainly some intrigue in this account, there’s a consistent need for satire and commentary that takes you out of the film. Consider the scene where Godard and Anne waltz around their apartment naked while they make commentary on the point of nudity in film. Okay, not a bad bit, but it continues on as if the director wants to continuously nudge the audience with his cleverness. This length of lunacy continues in several more fourth-wall breaking bits where Godard tries to explain himself akin to Alfie. Somehow I doubt Godard would be so willing to tell us so blatantly what it’s all about.

In trying to teeter between humorous digs at Godardisms and provide a snapshot into the life of a filmmaker turned political revolutionary, Godard Mon Amour only serves a quaint portrait of a more polarizing figure. For those not familiar with him, it is perhaps decent at best introduction to his greatest change in character and a taste of his artistic style. But once you learn more about the man behind some of the greatest films, one can’t help but be as disillusioned as Godard on the power of film and when it’s lacking.