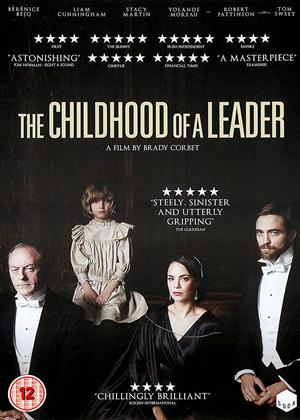 Rent other films like The Childhood of a Leader

Reviews (2) of The Childhood of a Leader

The first thing to say about this film is all the guff in the blurb about how this is some sort of master analysis of what makes a fascist dictator is just that.

Apart from the final section - which feels VERY much tagged on - this is just a story of a privileged spoilt son of a US diplomat in France as he works on the Treaty of Versailles in 1919 (when World War I officially ended).

Overlong and self-indulgent, this film can bore because it's slow and goes on and on.

Still, an interesting film about a weird little boy and his messed up childhood BUT that and only that. Just ignore the nonsense in the movie summary about this somehow being a deep analysis of what makes a child become a dictator - that is simply PR that's been used to sell what is, frankly, a pretty ordinary little film (which feels more French than American - hence the long pauses and the fact it's over long).

I gave up - The Childhood of a Leader review by LH

The opening title music is very annoying. I couldn't see any of the actor's faces as the lighting was almost non existent, hence I had difficulty in hearing what they were saying; I decided I didn't really care anyway and gave up.

The Childhood of a Leader review by Adrijan Arsovski - Cinema Paradiso

The Childhood of a Leader, directed by Brady Corbet, starring Robert Pattinson, Stacy Martin, Liam Cunningham and Bérénice Bejo among others is a beautifully shot full-fledged feature that ultimately crumbles under its own weight toward the end. Where the film shines is re-discovering conventions and defying moviemaking formulae – such as juxtaposing sounds in quite remarkable and innovational ways. Where the film falters is instead of sticking to a certain point and elaborating it further – it opts for an easy way out that leaves the audience uncertain in a manner of ambiguity which is immensely frustrating for one to experience.

The story is centered on a wealthy family just after barrels cooled off in the wake of WWI’s devastative outcome in France. Moreover, the film follows a child named Prescott (played by the young and talented Tom Sweet) whose borderline uneasy personality and strange quirks make him an outsider among the extended family. His Father (played by Liam Cunningham) comes off as an authoritative figure that seems to be never around the house when his wife (Bérénice Bejo) needs him the most. So, in a way Prescott and his mother are left to their own merits to try and make life work in the town they’re stationed at.

Soon, things go from mildly inconvenient, to straight out hellish.

People start acting strangely, weird characters pop out seemingly out of nowhere while an underlying score puts an uneasy gut feeling into an already upsetting stomach. During which, one can only indulge in the mesmerizing accomplishment that is The Childhood of a Leader’s awe-inducing cinematography.

Next: the acting. Robert Pattinson takes a day off from his infamous interview with the vampires and puts his talents to good use here. Liam Cunningham and Bérénice Bejo as the father and mother respectively give their best performances in years. But the real star is young Tom Sweet – whose uneasiness to conform in the face of danger makes him the perfect candidate for a future merciless authoritarian leader.

In addition, the ominous pads and eerie lightning make up for other parts where the movie lacks. For instance, a certain scene sees Prescott ‘galloping’ forward and conquering nature whilst the camera slightly shakes, having captured Tom in the middle of the frame – thus implying his superiority upon the rest of the group. A simple slice of genius that should’ve extended more than what we’ve initially, in the end, got.

In conclusion, The Childhood of a Leader may not have been the bestest, ground-breaking, paradigm-shifting feature I’ve expected it to be, but it’s most certainly up there - belonging in category and otherwise - with such films.

Then again, who am I to valorize novelty and awe?