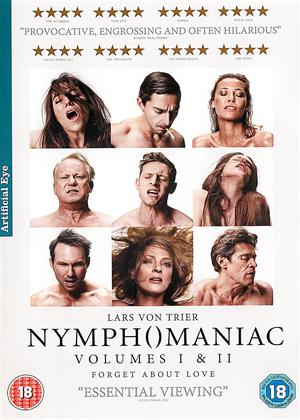 Misanthrope's guide to society - Nymphomaniac: Vol.1 review by AS

I'm not fan of all of von Triers work, but some of his early stuff (in

particular the television series Riget (The Kingdom)) and the recent

excellent with Nymphomaniac having a chance of becoming one of my

There are three aspects to understanding of this film: 1. Von Trier is

mentally ill. 2. He is a brilliant film maker, "technical perfection

as something natural" (Pogorelich) comes to mind. 3. He is a complete

misanthrope, he has zero belief in humanity or any possibility of

redemption, world would be a better place if solar system was replaced

by a cosmic void.

If you have at least some resonance with 3. above, the film makes a

gripping viewing. It is not easy, it's like being in a pub brawl,

where the you've just received two jabs, you feel groggy, your head is

ringing and you see a third one coming, straight for the nose, and

you don't do anything to prevent it. Everything is shown, all the

little unpleasantness that you really didn't want to see are there

with clinical precision. The scene with Umma Thurman, the father's

death and the final scene (of Vol 2) are masterpieces in themselves.

It's long and you should watch it in two instalments. I've lost my

nigt sleep after each of them.

‘Nymphomaniac’ is a huge project written and directed by Lars von Trier. Trier has proven a controversial figure over the years, with his filmic output attracting similar contention and many awards (Shia LaBeouf, who stars as Jerome, has said about von Trier that he is ‘dangerous. He scares me. And I'm only going to work now when I'm terrified.’). Trier suffers from depression, and appears to inject some of his personality into the characters. This is my first experience of his work, and I absolutely love it.

A beautifully directed opening, simply featuring snow falling on an industrial landscape, water dripping from roofing, slowly reveals the beaten and broken figure of a young woman Joe. She is found by lonesome scholar, bachelor Seligman, whose quiet ways mask his erudite intelligence. When Joe stirs, she too, is very well spoken, very refined. After she refuses medical treatment, he takes her to his spacious but dilapidated home. Therein, with the falling snow outside acting as a constant backdrop, she tells him about herself. She is a self-diagnosed nymphomaniac, and despises herself for it. Using his own interests as a yardstick, Seligman interprets her self-loathing, often into something more positive. Joe’s stories are divided into various chapters, sometimes resulting in her destroying lives and relationships, sometimes not. Seligman’s precise and dispassionate synopsis is because he is a virgin and remains sexually unmoved by Joe’s forthright, graphic accounts.

Possibly the most disturbing chapter is 6. "The Eastern and the Western Church (The Silent Duck)", in which Joe visits ‘K’ (Jamie Bell) to assuage her never-ending sexual dependency. The violence inflicted upon her willing person is punishing and sadistic – and it comes at a heavy price: the loss of Joel and son Marcel. Here we are actually seeing the regular repercussions and personal consequences of her condition and it is horrific.

‘Nymphomaniac’ is fascinating throughout. The playing is exemplary, the direction beautifully contrasting the ramshackle calm of Seligman’s existence, and the unstoppable, often self-destructive calamity of Joe’s addiction to sex. Sometimes the scenes are extremely graphic for a brief time, but such is the surrounding story and reasons for her carnal addiction, they convey the nature of her being rather than shock. There is a poetic sense of symmetry to certain events, words and statistics that ensures many things come full circle. And ultimately, that the flaws of the characters dovetail each other in a very satisfying manner.

The cast list contains Charlotte Gainsburg and Stacey Martin as Joe at different ages, Stellan Skarsgård as Seligman, and features Christian Slater, Uma Thurman, William Defoe and Udo Kier amongst many other very talented, naturalistic actors. The excellent Mia Goth plays ‘P’ (Goth is starring in a forthcoming remake of ‘Suspiria’ in 2018). My only complaint would be that the actors playing young versions of the characters look unlike the older versions – that is, if everything else wasn’t so perfect. And perfect isn’t a word I have cause to use very often.

‘Nymphomaniac’ was released in two parts in the UK, but has a total running time of either 241 minutes or 325 minutes, depending on whether you see the uncut version or not. It has deservedly won multiple awards, including three for Trier himself. Devoting the time to watch is an undertaking, but is worth it, because your eyes will never dare to leave the screen.