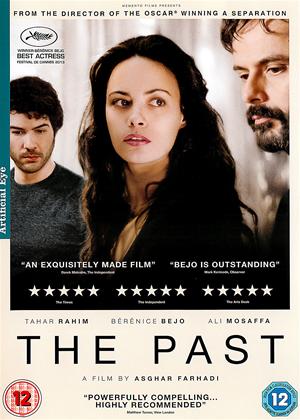 The Past - The Past review by RL

Briliant - thank you! A film with very few wasted words and lots of complicated relationships. But it leaves you thinking and yo know you have seen a film.

I enjoyed the film - my only criticism is the category of children and family isn't really suitable.

Quietly powerful - The Past review by SL

A complex and very human film. The characters are dealing with some great personal and interpersonal difficulties, conveyed with great sensitivity through some wonderful acting, particularly the character of Ahmed. It's a film that you reflect upon afterwards.

Excellent and different - The Past review by BE

A meloncholy and difficult film to watch. It certainly challenges the grey matter in trying to understand the dynamics of the relationships involved. First part initially slow but intrigue builds without a predictable outcome. Wonderful acting from the whole cast. Every subtitle carefully read. This is tantamount in trying to decipher what is really going on in the minds of the various characters.

The Past (aka Le Passé) review by George Hooper - Cinema Paradiso

While the story follows the buildup to a divorce much like director Asghar Farhadi’s previous effort, the Iranian film A Separation, The Past is a very different film, not because it is set in a different country, although that certainly changes the stigmas these characters must face but because these people are in very different parts of their life, each experiencing different problems and regrets as they all come to the surface at the same time.

The Past follows Ahmed (Ali Mosaffa) as he comes to Paris to finalise his divorce to his wife Marie (Berenice Bejo) who is now seeing Samir (Tahar Rahim), a Persian man. When there are problems with Ahmed’s sleeping arrangements while he is in Paris he is forced to stay with Marie and her three children while contending with Samir. The situations brings up old problems for everyone including the fact Samir’s ex wife is in a coma.

I felt that adding the final part of that synopsis was necessary because there are things about The Past that just don’t make for compelling drama and the melodramatic aspects of the film drag down a compelling story of lost love and even greater regret and self loathing. The film is full of corrupted people, people unable of really linking with someone because of things that have come before and watching them struggle and squirm through uncomfortable and hostile situations is truly gripping.

Listening however to a tagged on soap opera storyline doesn’t do much for the film but it can be glanced over if only because of the rich performances that the film contains, especially from Bejo whose Marie is stuck between the attentions of two men struggling for air and freedom of choice. Farhadi understands the topic he is studying and the kinds of human struggles such choices bring but he may want to find another aspect of filmmaking because although The Past is good, its no A Separation