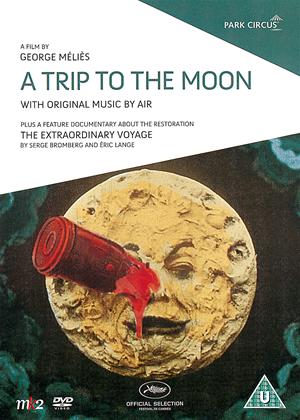 Rent other films like A Trip to the Moon

The Glasshouse Key - A Trip to the Moon review by CH

Lunar journeys are always more enjoyable on the screen than in reality. Who would want to spend long days in claustrophobic confinement only to get there, and find nothing except a good view of the Earth?

Sixty-six years before Neil Armstrong took that step, Georges Méliès accomplished the journey - there and back - in sixteen minutes. True, he had the help of hundreds, including a bevy of chorus girls.

A well-known stage performer with a sure-handed way of conjuring and sleight of hand, he saw the possibilities of adapting such vanishing-lady stunts to silent film. This was a matter of filming at eleven in the morning for a few hours while the sun was directly above his glass-roofed studio. Other hours were given to the building of sets.

And what sets they are! The spacecraft into which half-a-dozen men squeeze (among them, Méliès himself as the leading Professor) is launched through a huge cannon against a background of smoke as the chorus girls bid the intrepid team farewell and the vessel heads towards a beamingly yellow Moon.

All this had been inspired by Verne and Wells, and, naturally, there is trouble ahead.

None of this is derivative, however, for it is a creation all its own, heart-stoppingly so as the hunched-over, visibly-ribbed creatures fend off these colonisers.

To think that is but one of some six-hundred films Méliès made before the Great War (over half of them now lost) is all the more incredible when when one realises that some were shown in colour. That was a matter of two-hundred women colouring each frame of each print by hand (each woman specialised in a particular colour as they stood side by side in a barn-like premises for weeks at a time).

Such was changing society, especially with the advent of a War compounded by the invention of sound recording, that this was one of many films whose survival owed as much to luck as anything. Four times as long as the film itself is a documentary on the DVD which not only neatly summarises his life - with well-chosen scenes from other films - but shows the restoration process.

This took far longer than the creation of the film itself. By initial good fortune, a print of the coloured film was found in Span, brought back to France - and then came a gamble: the separation centimetre by centimetre of a reel which was close to coalescing into a useless acidic lump. Literally: knife-edge stuff. And it suddenly seems to belong itself to another era, for each revealed frame was copied and then stored upon one of those Macs which comprised a screen which sprang from what looked like an upturned pudding bowl.

There was not the technology to take the task any further at the beginning of this century: a counterpoint to all that had been done on the hoof in 1902. Come 2011 something had been done to improve software, and funding was now available to support a once-quixotic task (the French do not appear to have an equivalent of the word “geek” to which the documentary's sub-titlers have recourse). Things moved as swiftly as frame-by-frame work can do. The restoration is glorious. The film lives again.

Such was the dedication of the Mac-bound technicians that, in due course, they showed it a frame at a time on a large, silver screen so that they could check the colours' consistency. There was puzzlement at a silver streak in the edge of some frames: upon closer inspection, this was revealed to be an inadvertent creeping into the shot by a key which hung by the door of Méliès's studio over a century ago.

Neil Armstrong would surely agree that the return of this film is un grand pas.