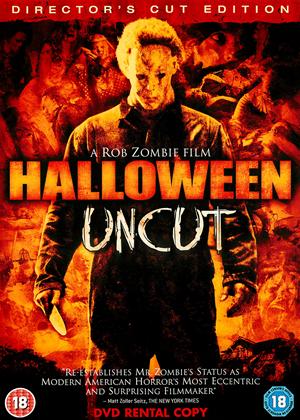 Of the recent crop of horror remakes 'Halloween' is easily the best of the bunch. I have to admit to being sceptical about Rob Zombie remaking John Carpenter's 1978 original film, but amazingly Zombie has created a remake which arguably is even better than the original. Zombie has taken the bare storyline of the original film and expand what was a basic suspenseful slasher movie into a far more rounded story which is essentially split into three parts. The first part shows a young Michael Myers growing up in an abusive and dysfunctional family where the only love he gets is from his hard working and busy mother. Singled out, taunted and bullied at school Myers cracks and kills a fellow pupil, then returns home and kills part of his family. Sent to secure institution, the second part of the film charts Myers emotional withdrawal and the efforts of Dr. Samuel Loomis to create some form of connection and halt Myers decent into insanity. The third part of the film follows Myers escape and return to his hometown of Haddonfield to track down his baby sister which ultimately results in a massacre. The clever part of the original 'Halloween' was the start of the film and moment the killers clown mask was removed to reveal it was a child, in the remake Zombie spends the first portion of the film showing Myers as a child, and the clever part is that he never shows face of the adult Myers, so when the adult Myers is on his killing spree all you visualise behind the mask is a blonde haired, androgynous looking and emotionally vulnerable child, which makes the killing seem even more powerful. And where the original film was very much a slash and dash style horror the remake is far more blood filled and violent, Myers is absolutely brutal and the killing scenes are far more prolonged, ferocious and savage. Rob Zombie also pays huge respect to Carpenter's original film by recreating key scenes and including the film's original score. Overall, as well being a superb remake this is easily one of the best horror films of the past decade, and if you're a horror fan this isn't one you should miss.

The original version of Halloween was so good, any remake is pointless, I feel it's a shame when such talent is directed at a remake, that talent could have been directed at a new movie, but as it stands it's wasted, great artists don't repaint existing paintings..

It's not always easy to take someone who chooses to call themselves Rob Zombie seriously. And it was with uncertainty I viewed his imagining of Halloween, the classic film from 1978 which spawned increasingly anaemic sequels.

It seems this new version is more of a slasher-flick than the scarier original. However, I don't really have a problem with that, and there is no point in making a direct copy of the original. Hence, we see here a sympathetic take on Michael Myer's childhood and are invited to understand him, although it's clear he has dangerous killing tendncies from an early age.

His revenge on the school bully who derided his mother (played by Sheri Moon Zombie), is brutal, bloody and relentless. Like a lot of the film, in fact. There is no supernatural, CGI-enhanced cartoon violence. Here, it is all graphic pounding, black blood, and the reducing of the bully from kid-with-attitude to whimpering, hemmorhaging bloody pulp.

There is nothing stylish or sophisticated about Michael's family. Indeed, Deborah (his mother) is possibly the only vaguely sympathetic character in the film. Indeed, that might be my problem with this - with no character you can truly invest in emotionally, it all becomes a screaming, shrieking soundtrack of the slaughtered.

I did enjoy this, though, certainly enough to watch it's sequel, which Zombie has claimed is his last involvement with the venture. There is always room for a brutal slasher film laced with profanities and violence. The acting is good throughout (Malcolm McDowell is excellent) and the many scenes of murder are handled in such a way they never get repetitive.