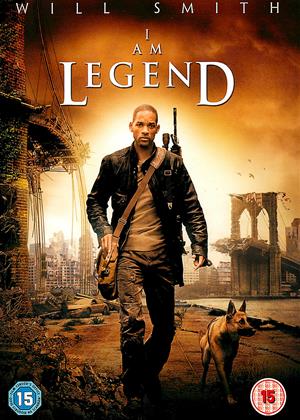 Don't Believe The Hype! - I Am Legend review by CP Customer

I was left feeling pretty disappointed after it's all said and done. My expectations for this were rather high, which I guess was my mistake. They could have done a lot more with this movie, given the premise (even if it's based on a book), but simply failed to do so. All you need to know going in is that a virus wiped out humanity, and Will Smith is the last survivor in New York City circa 2012. I'll give Will credit again for continuing to show why he's one of the best actors in the business. He really did carry the movie. Replace him with anyone else and this is probably the biggest flop of the year. The main problem I had with I Am Legend is it was just too shallow and one-dimensional. They started out with a good routine; Will exploring the city with his dog, trying to stay sane, and find a cure for the virus, while avoiding the mutant, zombie-like, blood-thirsty monsters the virus created. You get some flashbacks that are supposed to help fill in the holes in the plot, but they really weren't all that informative. I get the gist of it, but come on...give me some more info here. Through it all, I still enjoyed the first half. There was some good tension in places, and you get slightly attached to Will's character and struggle. From the second half on it just falls apart. The zombies become more of a joke than scary, and some horribly acted woman shows up and adds nothing. You only have two characters in the whole movie, and they couldn't fully develop them. I also wasn't keen on the ending, as it seemed like they just took the easy way out. Nothing was really explained, it just...happened. It might seem like I am being overly negative here, but the movie wasn't all bad. It was just rather average and vacuous. You can definitely be entertained, but just don't expect much substance.

I am Legend - I Am Legend review by CP Customer

Director Francis Lawrence creates an eerie, hold on to your seat ride into a frighteningly, chilling adaptation of a horror classic. I am Legend is the third adaptation of the 1954 sci-fi novel by Richard Matheson’s of the same name. Will Smith follows in the footsteps of Vincent Price (in 1964’s The Last Man on Earth) and Charlton Heston (in 1971’s Omega Man). However, he certainly provides a much stronger and convincing performance as the last man on earth.

Smith truly becomes Robert Neville a virologist who believes he is the last human survivor in New York City, where streets have become derelict and overgrown. Deers and Lions lope among deserted vehicles. The city has become this way due to a virus infection, which has turned the population into a legion of flesh eating, nocturnal zombies.

Neville is luckily immune to the virus and searches desperately for a cure in his barricaded, town house laboratory. He lives by a strict routine, which allows him to explore the wastes of the city with his dog Sam by day but as soon as the sun sets he must fortify his house, whilst the monsters run amok outside.

Neville’s increasing loneliness and constant flashbacks of his family leave you wondering about his sanity and when a young woman and a child are introduced to the story, we see just how badly Neville’s isolation from society has affected him.

A hair raising movie that will leave you on the edge of your seat, I am Legend is a powerful film with superb acting from Will Smith and an Alsatian called Abbey.

Excellent entertainment - I Am Legend review by Rob S

Having not seen the other filmed interpretations of this story and not having read the book, I came to this not knowing anything more than what I had heard and read in other reviews. I was therefore expecting to be disappointed as that seems to be the general critical opinion of this piece, to such a degree that I only recently placed this in my list. I'm pleased to say that I thought this was a great movie with some excellent scenes (especially when Smith - who is excellent in this btw, follows his dog into the dark, as well as the opening sequence with the red Ford Mustang - great shots of an empty, overgrown NY City). Most people seem to have an issue with the creatures, but I must say that I thought they were OK. Certainly scary and believable - yes, they probably could have been done better, but hey, didn't spoil it fo me.

The film itself resolves itself nicely and makes sense, which is more than can be said for many movies. So all in an entertaining film and better than the critics will have you believe.

In terms of extras, it's very disappointing with only a few animated comics which relate to the story, but there is no making of etc.

The one thing that did impress me was the picture quality of this disc - really stunning and looked like HD to me, especially the opening sequence.

Overall recommended and scores a 4.5 out of 5.

Absoloute pointless rubbish! Only in America :(

I AM Legend - I Am Legend review by CP Customer

Fantastic graphics on this movie, and great story,.

It really is worth the watch.

I really did enjoy it, Will Smith played fantastic in this movie.

I've seen worse - I Am Legend review by RP

Let's get it out of the way: I don't like Will Smith films. He's too over-the-top for me, too excitable, too silly, too mouthy. Unfortunately 'I Am Legend' stars Will Smith, so guess what - I didn't like the film. It's also yet another remake – the story has been filmed 4 times so far.

Based on Richard Matheson's classic 1954 novel it tells a similar story of a man alone after a global pandemic turns the population into vampiric zombie type creatures who come out at night. It is supposedly a study in loneliness – here, Will Smith is alone but for his dog.

There are a few silly bits: the infection is caused by a virus originally intended to cure cancer, and the doctor responsible is a Dr Krippen. Will Smith rents videos (he's word perfect at 'Shrek') and in his loneliness is apparently attracted to shop mannequins.

Anyway, unlike in the novel where the central Richard Neville character stands as a lone survivor killing the infected to whom he becomes 'Legend', here he finds a woman survivor who delivers the 'cure' to a colony of other survivors. Mawkish stuff and clumsily done.