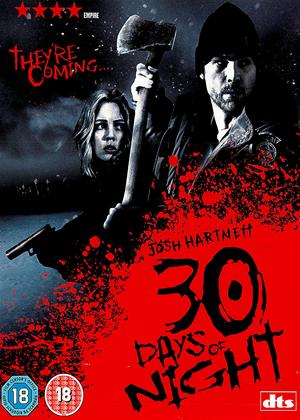 This is one of the best vampire films I have seen in a long time!

The action starts very quickly, and in the middle, you start to worry that it has peaked too early, but then it starts again! A suprising ending, with some tense, bloody moments in between!

Definately worth a watch!

This was a great vampire movie but would compare it something more like 28 days later as opposed to other vampire films.

A community in a remote town north of Alaska endures 30 days without sunlight every year. However, this year the community get more than just dark days! The group of vampires are vicious and hungry and prey on the town. Without any help available (no phone lines, airport closed etc) they have to stick together to survive.

It is a great horror flick and keeps you on the edge of your seat. Josh Harnett plays a good part as does his co-star Melissa George. The vampires are a gory sight!

During the first half an hour I wondered whether it would be more cheesy than scary - due to the strange vampire make-up - but surprisingly was a great watch with a nice side plot of the relationship between Josh Hartnett and Melissa George.

30 Days Of Night is set in the small industrial town of Barrow, Alaska, which due to its location within the Arctic Circle is plunged into total darkness for 30 days every winter. When the town effectively shuts down for its isolated 30 days of darkness the population migrates for an enforced vacation, leaving only a few remaining families and individuals to ride out the bitter cold and darkness. Investigating what he thinks is a simple act of vandalism, Sherriff Eban Oleson discovers a brutal murder scene, and from that point the town is plunged into a terrifying avalanche of horrific and brutal violence. The town becomes hostage to gang of vampires, set on a course of slaughter and destruction. Davis Slade’s direction and pacing of the film is fantastic. After a brief couple of opening scenes in which the story’s setting and lead characters are established the film quickly gathers pace alternating between scenes of high tension and vicious gore soaked horror all the way to final credits. The vampires are fantastic and owe a lot of the zombie genre; they have a real look of death and disease about them and kill not only to feast but for the sheer pleasure of killing. This is a film which does everything a good horror film should, it’s fast paced, thrilling, brutal, gory and horrifying. There’s no cheesy Hollywood ending and it finishes leaving you wanting more. If you are a horror fan then 30 Days Of Night is simply unmissable.

Quite good! Don't let Josh Hartnett put you off. - 30 Days of Night review by CP Customer

I don't normally like this sort of thing but it was genuinely different and Josh Hartnett was only quite bad and did not ruin the film at all! There are some bits that will make you jump, a bit of gore and although it has a predictable overall plot, it does not always go in the direction that you would expect. Overall I was not looking forward to it that much and was really quite surprised at how much I enjoyed it. Shame about the end.......

You’d have thought that vampires would have worked out long ago how much fun they could have in the sunlight-free Arctic winter, and Danny Huston’s stylishly savage band of bloodsuckers literally paint the town of Barrow, Alaska red, with only asthmatic sheriff Josh Hartnett and his unfeasibly gorgeous (estranged) wife Melissa George offering much resistance. Huston and his über-vampire mob dispense with all that “You’ve- got- to- invite- me- in-first” and “Ooh-I’m- scared- of- garlic” rubbish, casually smashing their way into houses, fending off bullets and outrunning cars, leading Josh and co. to resort to more basic tactics. It’s great fun with some memorably gory and shocking attacks by both vampires (boo!) and humans (yaay!).

A deliciously gory and entertaining modern horror film with a unique setting. Adapted from a graphic novel the film is set in Barrow, Alaska, the most northerly town in the USA and every year the town has a complete month where the sun doesn't rise. Many people leave the town for this time but many also stay and as everyone is preparing for the annual 30 days of night the Sheriff, Eben (Josh Hartnett), is baffled by a series of strange crimes where peoples mobile phones are stolen, generators are vandalised and dogs are killed. He soon arrests a stranger (Ben Foster) but the discovery of a body is quickly followed by the town being attacked by a strange cult with an uncontrollable blood lust and a few survivors try to hide out until the sun returns. This is a modern day take on the vampire film and truly gruesome they are too. Danny Huston is excellent as the leader of the nasties. This is not a film that dwells on the old tropes of the sub genre so there are no wooden stakes or garlic etc although the issue of sunlight is the key to the milieu. Horror films are thematically about some inner fear and vampire based stories are the fear of strangers, foreigners, disease and often uncontrollable lust. This film doesn't have any of the sexual desire themes but it strongly focuses on foreign intruders and consequently resonates with modern fears of immigration etc. But that aside this is action filled, bloody and downright good fun so if you love a good horror film then this is for you and even if you're not usually drawn to such films this one is worth trying because it's rather good.