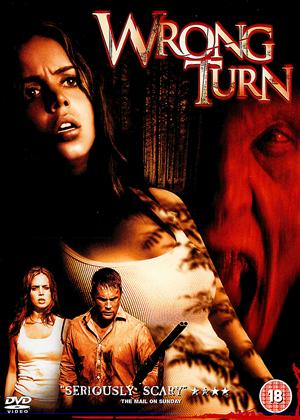 Synopsis:
Something strange is happening deep in the woods...but no one's lived to tell about it. Chris Finn (Desmond Harrington) is on his way to an interview, but when he is faced with a huge backup in traffic, he makes a U-turn, taking a shortcut to avoid the traffic...but he has just made the biggest mistake of his life. This wrong turn may be the last turn he ever takes! After crashing into the car of a group of young friends lead by Jessie (Eliza Dushku), an indescribable nightmare begins. Stranded on an isolated road deep in the woods there seems to be no hope of rescue.
When the friends encounter a group of monstrous mountain men with murder and mayhem on their minds, they must escape from a fate worse than death. As the grisly tension gathers in manic pace and shifts into high homicidal gear, only the strongest will survive...
Actors:
Eliza Dushku, Jeremy Sisto, Emmanuelle Chriqui, Desmond Harrington, Kevin Zegers, Lindy Booth, Julian Richings, Garry Robbins, Ted Clark, Yvonne Gaudry, Joel Harris, David Huband, Wayne Robson, James Downing
Directors:
Rob Schmidt
Producers:
Erik Feig, Brian J. Gilbert, Robert Kulzer, Stan Winston
Writers:
Alan B. McElroy
Studio:
Pathe
Genres:
Horror, Thrillers

Sign up
Friday the 13th: Part 5: A New Beginning

Wrong Turn revolves around a group of 6 people who on the course of a car journey take a wrong turn and end up in the back woods of West Virginia. As one car runs over some barbed wire leaving the passengers stranded in the middle of the road, another car crashes into it due to the driver not paying attention. Stranded in the middle of a forest where their mobile phones can't get a signal, and not a petrol station or any other convenience for miles, part of the group decide to walk back the way they came in hope of finding help while the others stay behind with the vehicles. Unfortunately they have all strayed into the hunting grounds of a group of cannibalistic mountain men out on a killing spree. Stylistically the film pays homage to 70's horror films such as 'The Texas Chain Saw Massacre', 'The Hills Have Eyes' and backwoods thrillers like 'Deliverance' and 'Southern Comfort', in the fact that is doesn't try and be overly clever or ironic. It's just a horror movie, with the aim of scaring and entertaining, which it does in abundance. Overall, the film is well directed, the acting is well above average for a film within this genre, and the script keeps the characters making fairly intelligent decisions most of the time, combined this with some clever special effects and plenty of gore and it's a must see film for horror fans.

wow wow wow what a film!. i put this film in front of my parents now they think every film is crap but when i say they jumped out of there seats with horror at every scene!. from start middle and end this film is great. very well written very jumpy if thats what you like. very slick and well put together. great actors like jeremy sisto from "a lot like love" this film will literaly leave you shiking with the pure thought of what kind people actualy live out there in the woods? watch this, buy it youll want to show all your family!

Five laconic young people are joined by a fifth, bland hunky monosyllable Chris (Desmond Harrington), the kind of beefy gent so beloved by genre films of this nature. Stranded in the woods of West Virginia, it isn’t long before two of their number – who make the fatal mistake of smoking weed and threaten to have sex – have been bloodily attacked and killed by unseen assailants.

‘Wrong Turn’ is a by-numbers slasher film. However, it is solid, well-made, has good performances and effects, and the location lends itself very well to the idea of inbred families hidden away from ‘normality’.

There comes a time when the group stumble upon what is clearly the home of the unlovely family, and yet, as is customary in such moments, still go in. Why? Because one of their number ‘needs to pee.’ With countless miles of wild forest all around, who wouldn’t enter a dwelling where human parts are over-flowing from pots and pans, uninvited, to answer the call of nature? And yet the illogical nature of otherwise intelligent people is essential for horror – without it, our remaining troupe wouldn’t be able to see the cannibalistic depravity in which these mutants exist, and the extent of the threat they pose.

The action moves at a fair pace as the group are picked off one by one, and each death is well-staged. The creatures know the land better than these city visitors and so this comes across as a game to them – their wheezing and shrill whoops of delight indicate they are always only seconds behind the diminishing band. Regarding the monsters – considerable restraint is shown in that we never get a really good lingering look at them. Their deformities are glimpsed through foliage, or obscured by movement, which enhances their effect. In the many sequels – five so far – the camera lingers on them a lot more, which is strange as subsequent budgetary restrictions show the make-ups become a lot less convincing.

And so ends chapter one, with a lone mutant survivor. As the enjoyable but formulaic films ends, (where inevitably, not-quite-death-metal title music rounds up the credits) the inbreed character Three Fingers makes one last holler of delight. He is the one cannibal that shows up in all subsequent films.