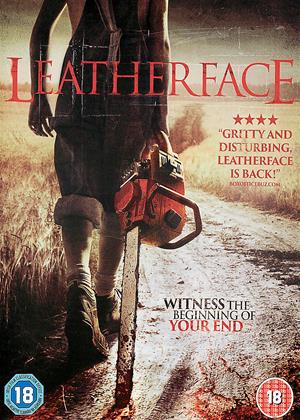 Yet another average sequel - Leatherface review by LC

By no means the worst of the numerous Texas Chainsaw sequels/reboots/prequels (amazingly, this is now the 8th in the series), this is a reasonable enough effort, but fails to develop into anything special. The story of a group of escaped mental patients on the run just about hangs together, but the slight storyline means the pacing drags as it goes on, and crucially the slightly-built lead fails to convince as the hulking Leatherface we've seen in previous films. For fans of the original, this is just about worth watching once, but I can't imagine ever wanting to revisit it.

Pretty new nurse Lizzie (Vanessa Grasse) is left to patrol a mental institution for deranged and violent children on her own, with no security to or senior staff to protect her. All on her first day. So being attacked and threatened is something she gets used to rather quickly. Even in 1955, surely this a serious security lapse. Ah well, it allows Lizzie, and us, to get to know patient Jackson (Sam Strike, formerly an actor on UK soap EastEnders). Jackson, a seemingly wholesome young fellow, isn’t his real name however – his real name is Jedidiah.

A furious Verna Sawyer (Lili Taylor) enters the institution and, on her own, incites a riot. She’s come to rescue Jedidiah, her son. Soon, they are both taken hostage by patients Ike (James Bloor), Bud (Sam Coleman) and Clarice (Jessica Madsen), who are escaping. This story follows their murderous rampage and the various events that lead to the birth of the legendary Leatherface.

I suppose whether you view this enterprise as a success or not depends on whether you feel Leatherface’s early life needs chronicling, if it is necessary (if you forgive the word-play) to put meat on the bones of a mindless, rampaging killer who became a horror icon back in 18974’s ‘Texas Chainsaw Massacre’. It’s up to the viewer to enjoy, or otherwise, a series of bloody events that carefully put all the pieces into place directly before the original story was told. Is the lead character better as a faceless lunatic killer, or a person with a past and an identity? Again, it’s for the individual to decide.

This individual had a great time with this. Terrific cast, no bubble-headed girls or vacuous boys. A strong, fast paced story full of eye-watering moments and genuine thrills. A decent budget, strong enough to stage a convincing 1950s setting, but not so generous as to be a slave to CGI that would add an unwanted cartoon element to proceedings. Sense is even made of Leatherface’s transvestite tendencies, which met with such disdain in 1994’s ‘Next Generation’ project.

Sadly this chainsaw is rather blunt. - Leatherface review by Spoons

It really is time to put this franchise to bed. Very disappointing prequel. If you want a real buzz just watch the 1974 original.