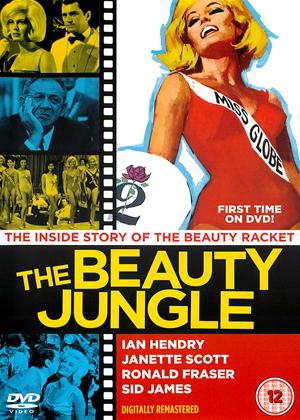 Synopsis:
On a seaside holiday to Weston Super Mare, attractive Bristol secretary Shirley Freeman (Janette Scott) meets Dan Mackenzie (Ian Hendry) from her local paper. Dan and his partner Walter Carey (Ronald Fraser) persuade Shirley to enter a small time beauty contest which she wins. Despite her success Shirley returns to her mundane office routine but is persuaded by Dan that she can make it as a Beauty Queen. Desperate to leave her humdrum existence Shirley packs in both her job and her fiance in pursuit of a life of glamour and celebrity in the bright lights of London.
Increasingly smitten by her, can Dan persuade Shirley that he should be more than just her manager or will she sacrifice everything to succeed in the cut throat world of beauty contests?
Actors:
Ian Hendry, Janette Scott, Ronald Fraser, Edmund Purdom, Jean Claudio, Kay Walsh, Norman Bird, Janina Faye, Tommy Trinder, David Weston, Peter Ashmore, Sidney James, Jacqueline Jones, Jackie White, Jerry Desmonde
Directors:
Val Guest
Producers:
Val Guest
Writers:
Val Guest, Robert Muller
Studio:
Strawberry
Genres:
British Films, Comedy
Countries:
UK

Reviews (3) of The Beauty Jungle

This 1964 film, which is also known as Contest Girl, is not a comedy. It has some comedy character actors such as Tommy Trinder and Sid James, and it begins in light-hearted fashion, but the drama darkens as it unfolds. Local newspaperman Don (played by Ian Hendry) is looking for stories down on the beach in Weston-Super-Mare and falls for bikini girl Shirley a typist from Bristol (Janette Scott). He steers her into a career in beauty contests up to and including a world event, and becomes her manager. Personal and professional tensions arise between the two – and that is the point of the story really. There are fleeting appearances by a host of 1960s celebrities and a jolly good big band jazz score by composer Laurie Johnson. I have seen the film now and again over the decades and always enjoyed it. Pity that the DVD - a 2013 release by Strawberry Media – presents the film with its picture cropped to 4:3 instead of the original widescreen format.

The Beauty Jungle,so I have read,is a decent British film from the early sixties about the perils of the catwork for unsuspecting young ladies.

That is about as much as I can say.Why ? Because apart from the opening credits the film is a pan and scan 1.33:1 travesty of an original cinemascope presentation of 2.35:1.which totally wreck's the film's compositional integrity.

Shame really,as as soon as the credit sequence finished I stopped watching.

OAR's should not be a problem these days.Not a fault of Cinema Paradiso of course who clearly state this in the DVD details.Much to my chagrin I did not expect the film to be in Cinemascope.

No ! The fault lies squarely at the feet of ITV Studios,who, as a major player should have known this,and treated the release properly.

No wonder we don't have beauty contests! - The Beauty Jungle review by Harry

This movie reveals the moral and practical dangers of showing off the female body in those cattle markets they called beauty contests. As if beauty is limited to curves, smiles and a big, showy hairdo equal beauty! Was not surprised to see the main contest of the climax was rigged. No wonder the main character decides to repudiate it all at the climax!

The appearance of some cameos from well known comics and famous faces made it interesting to watch, but only just .

Thankfully we hear very little these days about Miss World or Miss whatever, and good riddance to them!