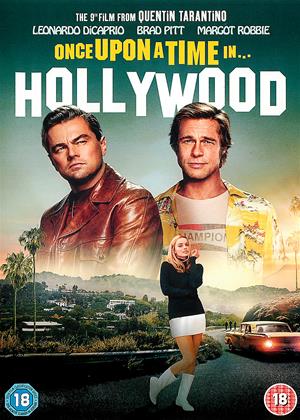 Rent other films like Once Upon a Time in Hollywood

Reviews (47) of Once Upon a Time in Hollywood

Brilliant - Once Upon a Time in Hollywood review by JD

One of the best movies of the year.

Loved the story, acting, music, cars and of course the Directors influences.

Could watch it agin tomorrow to pick up all the nuances I missed the first time. So many in-jokes and movie memorabilia.

15 out of 19 members found this review helpful.

Dreadful - Once Upon a Time in Hollywood review by PS

14 out of 35 members found this review helpful.

I agree with PS's review

"The worst film I have seen this year" so disjointed with extreme and unnecessary, violence. I am surprised that Brad Pit or any headline actor would have agreed to take part in this rubbish!

10 out of 23 members found this review helpful.

Good Grief , Possibly the Most Boring Movie I've seen this year .Some Really Bad Acting ,Lots of Characters based on Famous people we know but within the movie we find out very little or nothing about and NOTHING Happens for almost all the movie and then something happens but its all over in 5 minutes then Nothing happens again. Finnish. and None of this is worth sitting down to watch ,Tedium like Toothache builds up within your chest and head and then its over and you can never ever think about it again.

Below par - Once Upon a Time in Hollywood review by HM

Tarantino lost it a while back. This is self-indulgent stuff, maybe he and his mates get it? Film critics certainly did but is it worth a watch? Well yes, it has its charms, but the drawn out conversations we always get and enjoy seemed tired, just like the Hateful Eight. Maybe some of it went over my head, but aren't these movies supposed to be accessible?

The backdrop real life events are a powerful story of their own and he uses them to tell the tale as a convenience supposedly to say goodbye to a more romantic Hollywood. Frankly it was all lost on me. Entertaining but not as good as critics made it out to be.

Didn't rate Brad Pitt's performance as anything special either; also had some of the duller scenes to deal with. So, so movie.

I had to force myself to carry on watching this. The first half was just so self indulgent and self congratulatory. I am glad I did finish it, but I find it hard to understand why it is up for so many awards. I would not give it any.

The good, the bad and the ugly - Once Upon a Time in Hollywood review by Alphaville

Set in 1969, this is a feast of nostalgia for baby boomers but lacks focus as a drama. It owes too much to one of Tarantino’s favourite 60s films – Jacques Demy’s ‘The Model Shop’, which has a similar lack of plot to drive the movie forward. The two leads at its heart – fading star Leonardo DiCaprio and his stuntman Brad Pitt – are too one-dimensional to hold the viewer’s interest. This results in a patchwork of episodes, most of which go nowhere.

That’s not to say there are no standout scenes here. Damian Lewis is a hoot in a cameo as Steve McQueen. Brad has a rollicking fight with Bruce Lee and his visit to the Manson compound pulsates with tension. Sharon Tate goes to the cinema to watch herself in The Wrecking Crew – a scene made powerful because we know what’s going to happen to her (the viewer’s knowledge of the events of 1969 is taken for granted).

But just when the film’s beginning to grab, Tarantino ruins it all again in the third act with a voiceover that pointlessly describes everything we’re seeing on screen. And yet… turnabout again with a final outburst of violence that is more unexpected and powerful than you might imagine. All told, there’s some really good stuff here, but it could have been so much better with a tighter script.

Apart from being a vehicle for Brad Pitt and Leonardo DiCaprio, who show what good actors they are here, this is disjointed, violent and messy. Not even sure what it was about, apart from 2 washed-up men still trying to make it in the film business.

The plot is a "what if" take on the real life gruesome murders of pregnant actress Sharon Tate and companions by members of the Charles Manson cult. Tarantino skillfully steers a path somewhere between reality and fantasy recreating a half-true and half-invented golden era in Hollywood where the good guys were good, the bad guys were bad and everyone knew who was going to win in the end.

Brad Pitt and DiCaprio are outstanding as two old-pros coming to the end of their careers. This is an unapologetic movie by a Hollywood director about Hollywood with every scene a cinematic reference. A read of the Wikipedia articles on Manson, Tate, Polanski etc before watching the film will be a great help to understand what is going on. If you just want a night-in-with-popcorn then best to rent one of Tarantino's other movies (which are also great).

I enjoyed the late 1960s references and style, and the Hollywood glamour set backdrop. However its a strange and ultimately unsatisfying film, with many themes not coming together. I agree with other reviews that it is unnecessarily violent. Brad Pitt's character is never really developed and that's a real shame as he's probably the most interesting personality in the film. As a positive the chemistry between Pitt and DiCaprio is excellent and kept me watching what was quite a long film to its painful conclusion.

if your expecting pulp fiction or similar then youl be disappointed. most of the film is about great acting, sets and scenery.

im sure its all great if you like that sort of thing but i wanted more like pulp fiction so i fwded though most while stopping at bits to pick up the story and characters. then watched the last part.

watching it the way i did let me really enjoy it without been annoyed like other people. i can see why so many people dont like it. but the end is so cool!!!

1 out of 11 members found this review helpful.
Show more

Tarantino’s Once Upon a Time in Hollywood takes place in 1969 Hollywood and orbits around true celebrities. But, like a lot of Tarantino films, it’s an idealized version of such a time, looked back on with a certain allure and longing present in most of the director’s revisionist takes on historical tales. This is nothing new but what’s most compelling about this particular film is that the director gives a humanizing and somewhat tender appeal to actors of the era.

Within the highly-detailed 1969 setting, we follow two fictional characters based on familiar acting careers. Rick Dalton (Leonardo DiCaprio) is a washed-up Western actor reduced to guest spots and due for a descent into the world of Spaghetti Westerns. He is meant to represent Steve McQueen’s troubled time after playing the lead on the Western TV series Wanted. He’s emotional, frustrated, and bitterly fearful of what his future holds. Sticking with him through thick and thin is his stunt double partner, Cliff Booth (Brad Pitt), a champion for the hero and more or less representing the relationship of Burt Reynolds’ relationship with his stunt double. Whenever Rick feels his lowest, Cliff is always there with his big sunglasses, a long smile, and sometimes beer and pizza to remind Rick of how great he has it.

We get to know a lot about these characters and not merely through some mild narration by Kurt Russel, who better explains their careers than personalities. We see how Rick reacts in private while working on the set of a Western, breaking down in tears when questioning his career path and messing up his trailer when screwing up lines. He takes his job seriously with shaky hands, spending his off-hours in the pool running lines with a tape recorder of himself reading back the lines of others, trying to get his acting just right. As for Cliff, he spends his days eating mac & cheese out of his trailer and milling about the city trying to find stuff to do. He doesn’t have much but he takes life as it comes, unsure of the future but never too fearful of it.

Gravitating around these two are real figures of the era, seen in mere glimpses or flashbacks, from Steve McQueen opening up about gossip at a Playboy mansion party to Bruce Li challenging an actor on a Hollywood backlot. The one real actor we spend the most time with is Sharon Tate, played with great glee by Margot Robbie. Her subplot is somewhat uneventful but we get to experience her wonderment as that of a golden idol, the representation of the warmth and pride in being an actor, to lavish in your work once it has been completed. On the opposite end of the spectrum, there’s a brief glimpse of Charles Manson, also seen from a distance as that of an evil we can never fully comprehend within the picture. We do see plenty of his followers though, a collective of bitter and vicious hippies who cook up wild ideas of murder to attack the system.

Tarantino maintains his love of character within the picture, giving us plenty of time to get to know these characters and hang out within their worlds. Seemingly nothing moments always carry a certain allure of eye-candy in detail, from the old-fashioned beer in Cliff’s fridge to the retro radio spots heard during drives across the sunny cityscape. There’s a beauty to the film’s wonderment while also embracing the darker side, as the film slowly moseys towards a somber ending we know is coming. That being said, it does carry a lot of familiar Tarantino-isms that make his films so much fun, from great dialogue that carries on long scenes to brutally over-the-top violence that punctuates in a wonderful bit of fantasy.

Once Upon a Time in Hollywood is pretty obviously Tarantino’s romantic ode 60s cinema. He has spent years spouting his love of old films like your favorite pop culture professor who just can’t stop excitedly telling you about Lee Marvin or Sergio Leone. This is the director at his geekiest of film-making standards and it’s easily one of his most intoxicating masterpieces.