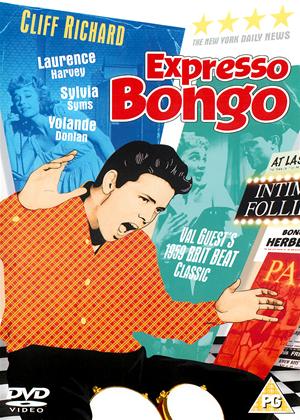 Film benefits from the safe hands on board of Wolf Mankowitz (writer) and Val Guest (director), and a crazy, out of control performance by Laurence Harvey as Johnny Jackson, a Soho showbiz manager of uncertain integrity and reliability. And accent.

'Expresso Bongo' was originally a stage play, a satire on the music business. In this 1959 film version some elements of satire remain, but are overshadowed by an attempt to provide a vehicle for the talents of Cliff Richard.

Although somewhat overlooked today, Cliff is the most successful British pop artist with more Top 20 records to his name than anyone else - and he's been going for 5 decades, so he must have some talents. Unfortunately, those aren't on show here. Yes, he does get to croon a couple of numbers, more in the style of Ricky Nelson than in the 'British Elvis' rock 'n roll style by which he first came to fame, although he does curl his lip in the approved manner of the day. His acting is awful - and he just generally seems out of place,

As far as the music goes, the best is from Cliff's backing group 'The Drifters' (pre-Shadows). But the film isn't about music, it's about the music business and the squalid and dirty deals of small time agent Johnny Jackson (Lawrence Harvey) and music promoter Mayer (Meier Tzelniker). Lawrence Harvey is an actor that I can't usually stand - but his acting (and his jiving!) here was a eye-opener for me. Harvey is excellent and despite his dodgy accent which ranges from Jewish to South African via Cockney (despite his English sounding name he was Lithuanian via S Africa) his role is very well played, as is that of Meier Tzelniker.

There are some very peculiar things about this film. Why do the 'teenagers' look so old? Did they really go wild for such timid music back in the 1950s? And go wild in a coffee bar of all places? (Yes, I know that the reputed birthplace of British rock 'n roll was the 2i's Coffee Bar in Soho - I just don't understand it). Why is there a bongo player in a rock 'n roll band? And 'Bongo Herbert' - is that a name to set kids on fire? Why is the strip show so tame? (Well, I guess the film was mildy risqué for its day - and it was cut to get an 'A' certificate). Why was Sylvia Sims cast against type as a stripper - and why is her accent so posh? Why does Susan Hampshire get an uncredited role as an upper class twit? In fact, the screen is littered with well known actors - have fun spotting them!

The film is a very curious period piece and worth watching for that reason, but unfortunately not for Cliff's performance. 3/5 stars.