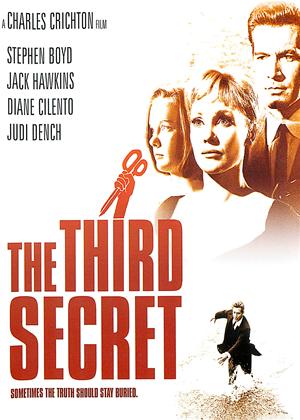 Reviews (1) of The Third Secret

"A Delacroix in the Bathroom?" - The Third Secret review by CH

Such lines occur frequently in this London-set film (1964), much it taking place beside a low-tide Thames. "There's enough junk here for a two-year calendar!" "There are few masterpieces in the world - but there are many millionaires." And these lines are only in the scenes with an extraordinary turn by Richard Attenborough as a gallery owner and himself an anguished painter of calm scenes (with a young Judi Dench as secretary). He has been visited by Stephen Boyd, an American television broadcaster based in London and esteemed by the nation as a rock-steady commentator. In fact, he and Attenborough shared a widowed psychiatrist, who dies, an apparent suicide, in the opening scence with an enigmatic whisper to the housekeeper.

The psychiatrist's fourteen-year-old daughter - a remarkable performance by Pamela Franklin - is certain that there was foul play, and enlists Boyd's help. This sounds preposterous but the acting carries all with it. Elements of the customary procedural tale are there, but this is a film notable less for adroit plot turns (a fine script by Robert Joseph) than its filming: director Charles Crichton owes much to the often deep-focus cinematography of the ever-reliable Douglas Slocombe. Even small rooms assume epic proportions, with faces in half-shadows redolent of the With the Beatles cover (as with that photograph, the film would not have worked in colour).

Dream, nightmare and reality overlap, with an emphasis on chalked messages upon Thameside walls, where also stands, or rather sits, a statue of Hans Christian Andersen, who has a bearing on events.

If all this sounds rich (in both senses of the word), it is but a small part of a film which also, at one fraught moment, brings allegation of Lolita-like situations, one of them upon a four-poster bed.

It is a continually unsettling film, not least with something almost unspoken, if not unspeakable, about the past in the life of a Judge - Jack Hawkins, no less: he unbuttons, literally and metaphorically, after sitting through another day in the life of a detailed industrial-espionage case.

Why is this film not better known? Give it a whirl, and you will be sure to spread the word. And, meanwhile, word is that a strand of the plot, with Patricia Neal, was cut after filming. That would have made it too long, but would be fascinating to see if the footage survives somewhere. All too often Crichton is mentioned for a late-career return to cinema with A Fish Called Wanda. Make no mistake, The Third Secret us far better.