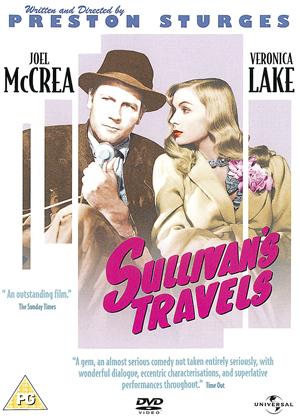 Still entertaining after all these years - Sullivan's Travels review by LR

Made in 1941, Sullivan's Travels is amazingly fresh and amusing even 74 years later. It is a classic Hollywood comedy, full of snappy dialogue and with an incident-packed plot. The casting is excellent, especially Joel McCrea as the idealistic star who knows little of the real world, but also in terms of all the commercially-minded Hollywood executives that Sullivan/McCrea is up against. He wants to engage the film industry in a campaign against poverty. The execs only agree when they begin to see PR opportunities in the research expeditions that he embarks on. Hence the ludicrous scenes when he tries to go out and meet the poor with an army of execs and the studio catering van on his heels.

There is a timeless quality to the story. Literature has many idealistic young men whose intentions are admirable but who lack the worldly wisdom that is needed to realise them. Fortunately the idealist meets a young woman who has slightly more of a clue (Veronica Lake) and they start to make progress together, both in terms of his quest and in terms of romance, of course. It is to the great credit of the film-makers that this delightful comedy also has the decency to show some scenes of real Depression-era poverty - homeless people sleeping in communal shelters and relying on the soup kitchens to survive. Acknowledging that reality gives the film an extra dimension and shows that great comedy can have a sense of moral commitment and still be deliriously funny. The idealistic young reformer may be shown to be laughably naive, but he is right about the existence of poverty and the need for political action to remedy it. We may laugh at his mistakes, but we recognise his worth as a decent, compassionate person. Likewise we recognise the film as a hilarious comedy, but we feel also the decency and compassion which give it substance.

This extremely strange film handicaps itself from the outset by attempting to combine gritty social realism with screwball comedy, and the result is inevitably schizoid. The whole idea of a very rich man playing at being poor so that he can understand poverty well enough to make a movie about it is absurd, and one of the film's strengths is the way it frequently comments on its own absurdities. The hero's butler very frankly tells him that what he's about to do is both an insult to genuinely poor people who can't stop being poor the moment they get tired of rôle-playing, and incredibly stupid because he hasn't a clue what he's getting into and he could easily end up dead. And the moment we first see Veronica Lake in male drag, she points out the utter futility of her trying to pass for a boy.

The highlight of the film is undoubtedly Veronica Lake's wisecracking cynic with a soft heart, who falls for our hero when she thinks he's down and out and doesn't like him so well as a smug, pampered rich man. And it's a great running gag to have the relatively tiny Veronica Lake constantly remind the towering Joel McCrea that he won't last ten minutes on the street if she's not there to protect him. But although she effortlessly steals every scene she's in for most of the film, towards the end she goes very quiet, and for quite a long stretch she disappears altogether, because the hero's learning experience gets so serious that her witty remarks are no longer appropriate. And when events spiral nightmarishly out of control, things get so dark that the movie switches genres and most of the supporting cast no longer belong in it.

The depictions of grinding poverty are extremely realistic - many of the extras seem to be genuine homeless people - and the predicament our sadder and wiser hero eventually gets himself into is truly awful. The trouble is that this film starts out by showing us zany stereotypes exchanging wacky banter and a completely irrelevant car-chase so cartoonish you expect Dick Dastardly to join in, and ends up portraying squalor, misery and real violence with serious consequences, by which time you'll probably have noticed that you haven't laughed for quite a while. Ironically, the hero eventually concludes that making comedies and cheering people up is better than depressing them by showing them how much suffering there is out there. It's almost as if he's been watching himself starring in this movie and he didn't like the direction it took in the second half.

It is an irony that Sturges should shoot such a preachy and didactic story to protest that comedies had become too preachy and didactic. Sullivan's Travels features a Hollywood director of light entertainment (Joel McCrea as Sullivan) who goes off the map in order to research his latest project set among the victims of the great depression, a serious film called Oh Brother, Where Art Thou. A tourist in the despairing lives of the destitute.

And his conclusion is that the poor need more laughs. Which is glib and patronising. The theme of the film sputters occasionally. We are invited to sympathise with the victims of the depression's vast wave of poverty, but then the uber-rich Sullivan cracks a joke lamenting income tax. We are asked to recognise the dignity in poverty of the southern black population, but then Sturges writes a really unnecessary racist characterisation elsewhere.

Part of the problem with the film is McCrea and Lake just aren't great comedy actors, and Lake is made far too glamorous for a woman who has experienced failure in tinseltown. But it does work as an interesting and entertaining film about Hollywood. While there are the director's usual plethora of pratfalls (everyone keeps falling into Sullivan's pool) there is a smattering of decent verbal comedy, though there is a great deal of editorialising too.

Screwball comedy was almost over in 1941, for the reasons Sullivan gives: the war in Europe, the rise of fascism, global economic depression. But also because the motifs of screwball were no longer new. Sullivan and Sturges' great discovery is that people need to laugh in the shadow of crisis and hardship more than ever wouldn't prove to be the case. In the coming years, comedy would become darker, more diverse, and (arguably) less funny. Its great golden age was over.