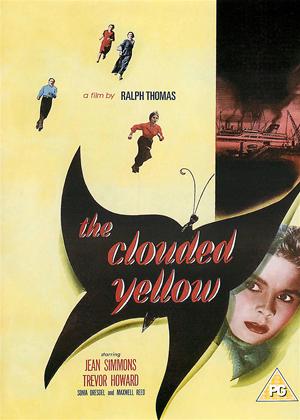 Reviews (1) of The Clouded Yellow

Insects were harmed in the making of this film. The credits do not say so, but one might infer it.

A year after playing the upright Major in The Third Man, Trevor Howard found himself taking a different turn, an MI6 officer who, for some reason, is obliged to return to London, there handing in his resignation and gun. He maintains similar rectitude, however, and, after a visit to an employment office, decides to take a job for which there have been no takers. He goes down to Hampshire to spend some time in cataloguing a butterfly collector's examples: boxes of these once-fluttering creatures are upon shelves in an elegant house. As chance has it, the collector is played by Barry Jones, who bears an extraordinary resemblance to another such collector, Vladimir Nabokov. The novelist was not widely known in 1950. There were to be several years until Lolita emerged (to use a butterfly metaphor).

Not something that one might mention, except that The Clouded Yellow (a type of butterfly) turns around a remarkable plot, created by Janet Green, and directed by Ralph Thomas who is perhaps best known for the series of Doctor... films but also later made one of the best political-scandal thrillers, No Love for Johnnie, with Peter Finch. Thomas brings a sure touch to all this, with an early appearance by a gamekeeper upon whom Jones's wife - Sonia Dresdel - has a fixation less frequently satisfied than she would like. Meanwhile, said crass gamekeeper also has the hots for her fraught adolescent niece, Jean Simmons, then twenty but appearing rather younger.

Jean Simmons is an orphan, her musician father and mother dead in strange, indeed suspicious circumstances (music for the film was provided by Benjamin Frankel). Why is the aunt gaslighting her, making her doubt her memory of the death scene and forbidding her to play her father's music on the piano?

To say all this does not give away too much, nor to say that amidst these lives of quiet Hamsphire desperation, Trevor Howard falls for Jean Simmons - hence the earlier reference to Lolita. She is in her teens, and he appears at least twenty years older (of course , Howard always gave the appearance of springing forth in the maternity ward with a moustache and custom-made tweed jacket while the midwife slapped him into life).

Events have the pair fleeing, Howard's secret-service past taking them to convenient boarding houses rather than motels, with several English cities filmed in a noir style to rival Vienna's, albeit without any cats to hand but a posse of cyclists causes equal trouble.

Why isn't The Clouded Yellow better known? What's more, why is the current DVD reduced by some ten minutes from the original running time of 95 minutes? The well-filmed ending might appear on the hasty side, but one suspects the loss of some scenes from Hampshire, a hint of which is supplied by the one in which Trevor Howard and Jean Simmons, with a shared net, give chase to a butterfly, fall to the sunny ground, find their captive to be a common one - and let it go.