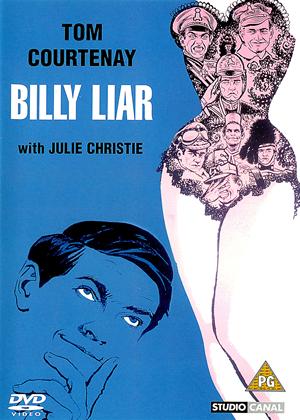 Some films are great because they embrace a particular genius that transcends other facets of the work which may be only competent. Some films feel entirely perfect. Billy Liar is one of the latter.

It is impossible to conceive of how this film could be improved. The casting is sublime, the dialogue expanded from Keith Waterhouse's novel is endlessly quotable. The impression of a changing northern town is vivid. And the camera under the control of Deny Coop is lively and à la mode.

Billy Fisher (Tom Courtney in his best role) is an undertaker's clerk who prefers to live in a fantasy, rather than the uninspiring world around him. Juggling a pair of very contrasting fiancées, too immature to deal with difficult emotional decisions, not ready for the yoke of employment, he retreats to Ambrosia, a mythical world of which he is President, and looks to install Liz (a 21year old Julie Christie) as his First Lady.

It is a wonderfully imaginative film in the style of the British new wave, with a redeveloping Bradford forming its collapsing backdrop, and with many, many truly hilarious scenes.

It's quite a difficult trick for films from the so-called 'swinging sixties' to appear anything other than, at best, very dated - yet 'Billy Liar' manages not only to retain its humour but also its social relevance.

19-year-old Billy Fisher (Tom Courtenay) has a steady clerical job at an undertakers, but dreams of being a comedy scriptwriter. He doesn't get on with his father (radio presenter Wilfred Pickles), has managed to get engaged to two girls, the prudish Barbara (Helen Fraser) and the outspoken Rita (Gwen Watts), but really fancies the free spirited Liz (Julie Christie). Apart from his girlfriend troubles he's in trouble at work - and escapes from all this into a make-believe dream world, where he is a heroic war leader and president of Ambrosia. And Billy tells lies in a forlorn attempt to evade and avoid the truth.

To say that Billy is immature would be obvious - and while his character is amusing he's also not very likeable, evading his responsibilities, and mocking those around him. Yes, there is humour here, but the film treads the borderline between poking fun at the old and outright disrespect, for example dancing down the steps of the war memorial.

The era is the cusp of the swinging 60s (yes, it has reached the North by 1963) and is emphasised by the demolition of old buildings and new construction, and by the bubbly personality of Billy's true love, Liz. Julie Christie only appears in the film for a few minutes but her character really lights up the screen. Despite his dream of being a scriptwriter having been shattered, she persuades Billy to come with her to London - but (of course) he misses the train. As he returns home to his parents' house, will his character be redeemed by having to face up to his responsibilities rather than running away? We can but hope...

The film still retains the freshness it had over 60 years ago, although it is beginning to show its age. It is helped by the quality of the writing (it had previously been a novel and a stage play) and the quality of the acting, helped along by Leonard Rossiter, Rodney Bewes, Finlay Currie, Mona Washbourne et al. If I have a quibble it's that Tom Courtenay looks too old - Billy is supposed to be 19, Tom Courtenay was 25 when this was filmed in 1962 but looks older.

The film is a strange mix of social reality / kitchen sink drama and comedy, but one that works well. The accents are authentic too, proper Yorkshire (with the occasional Lancashire thrown in for good measure) unlike many other films where the accents are a bit suspect. Also a bit suspect - but a proper part of the film - is the character of Liz, best described as a 'free spirit' but who has just returned from Doncaster and (wow) has worked at Butlins!

[Aside: I enjoy trying to spot locations in films. While most of the location shots are in Bradford, Julie Christie can be seen walking past the construction site of Piccadilly Plaza in Manchester - the roofline of the (now demolished) Bernard House is unmistakeable]

Well worth watching - there is much humour here, and as Julie Christie's breakthrough film role it really should be seen. I'll give it an over-generous 5/5 stars to encourage you :)

If Wishes Were Horses, Beggars Would Ride. - Billy Liar review by NC

The '60's may have swung for some, but for many others it was a time of being sold down the river by a world which left them as flotsam. As wrecking-balls demolished the old to make way for those who could turn daydreams into reality, the rest were left with daydreams only, stuck in a dead-end job, (literally, in Billy's case, as an undertaker's clerk), and nothing to look forward to but marriage and a family life (the personal experience of which could hardly have made him ebullient at the thought).

'Billy Liar' begins with that long-running sop for the masses, 'Housewives Choice'. A request read out on the radio could be a highlight of a life. If not that, then being in a crowd to watch a talentless comedian cut the ribbon to open another soulless supermarket. No wonder Billy retreats into fantasies and lies. When these fantasies and lies become more important than to him than his family and his job, difficulties and confrontations inevitably ensue. For Billy is not only a victim, but also an exploiter: passing on the hurt to Barbara and Rita, engaged to both, (and just one engagement ring), far from in love with either, and feeling something only for Liz, another free spirit, but someone with the courage to act in deeds, not just in thought. Crises come, as we know they must, in both home and employment, and Billy has one chance to stop dreaming and start doing...

Billy's parents were perhaps the last generation who thought they should be grateful for what little they have, and a blazing row between Billy and his father has to do with how 'grateful' one should be. The Angry Young Men showed how thankful they were for the high-rise flats, the never-never, and love on the cheap.

Tom Courtenay made a name for himself in 'Loneliness Of The Long Distance Runner' the year before (1962). 'Billy Liar' was to cement him as one of the bright young talents of the time. It's a virtually flawless performance. It helps, of course, when you have the likes of Leonard Rossiter, Julie Christie, Wilfred Pickles, Mona Washbourne, Helen Fraser and Rodney Bewes around.

Rita, one of his let-down fiancees, furiously calls him a 'nobody', and it's true. The world has always and ever will be full of nobodies dreaming of being somebodies, which is why 'Billy Liar' will always be relevant.