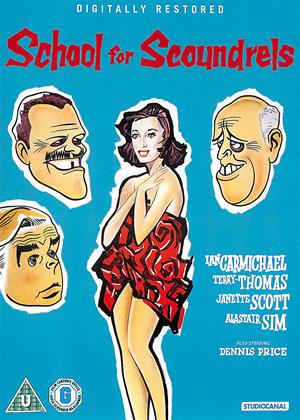 Reviews (1) of School for Scoundrels

OK, so this film (from 1959) is very dated. Its attitudes to male/female relations will no doubt make many an angry feminut spit feathers.

It is, for me, way funnier than all the achingly pc and right-on 'comedies' we have to endure on BBC2 these days. Old-fashioned does not mean bad.

Ian Carmichael plays self-confessed loser who sign's up with the College of Lifemanship to help him get on in life.

A silly plot can be forgiven really, esp some nonsense involving a car - and there are two very funny stereotyped used car salesmen.

Many a modern Hollywood comedy has ploughed a similar furrow - although in common with most British comic novels and films, the main character is a 'loser' and anti-hero and a man.

The ending is silly. But again, with this quality cast, who cares?

4.5 stars. A must for anyone who loves Ealing comedies etc.