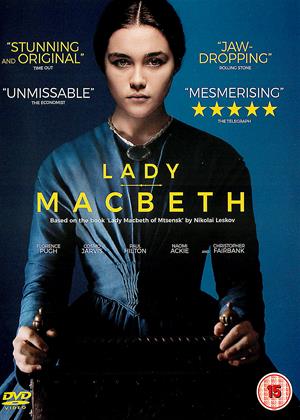 This is a quiet and unhurried film, but the important thing is the mood it sets, the weight of oppression, and the emotional impact into this cossetted world made by Katherine, which is like a whirlwind. There's no Lady Macbeth as Shakespeare wrote her, but imagine that character with all her desire and amorality dumped into a young nineteenth century girl who's sold into a loveless marriage - what would she do? Accept her unhappy lot and play the part of a dutiful wife, willingly confining herself inside the mausoleum of a house and waiting for.... something? Not likely, right, and that's exactly where this story goes.

It's very compelling and as Katherine becomes more soaked in Macbethian blood increasingly grotesque. It's also shot rather beautifully, and in Florence Pugh it appears to know that it's found a future star.

Probably closer to life than any television costume drama this film reworks the Lady Macbeth of Mtsensnk story and places it in the rural northwest. A young woman, married off in an arrangement of convenience to an older, unloving and bullying husband. He only other relationships are with a virtually mute maid and her husband's father, equally foul and bullying. She slowly begins a Chatterly-esue relationship with an agricultural worker that leads to a miserable, frightening series of events.

Another critical success turns out to be a miserable and illogical waste of time. The suspension of disbelief required to swallow this story is akin to a superhero romp, but without the potential for entertainment. I don't mind slow paced movies but am bored of misery fests.

Riveting from begining to end a 5 star movie with brilliant lighting and location, did not have to suspend my disbelief + Florence Pugh an actor to be looking out for in the future.

Very atmospheric film of life in the north many years ago. It portrayed the stark life that was lived. The characters were good, some cruel and mean, others dumb and others just plain frustrated. It was an interesting slant on Macbeth and I enjoyed it. It is a slow burning film and more real than many other historical portrayals of life at that time.

I did not like this movie a bit slow and boring, I did not watch it all so maybe if I had I may have liked it better

Girl has a affair.. not veryt well done. Looks like whole film shot in someones house. Very amateur and low budget feel. Takes itself to serious

Gripping, thoughtful and thought-provoking. Sensational central performance. Period thriller that benefits from a restrained directorial style and cinematography, and pared-down dialogue so that everything seems to be carefully weighted and significant.

Based on an 1865 novella by Nicholai Leskov which was published originally in a magazine run by Dostoevsky, then turned into an opera, this is a strong story which sticks in the mind (nothing to do with the Shakespeare play by the way).

It's more or less a character study of a sick and twisted evil woman - though no doubt she's seen as a feminist hero by some.

It's slow, all very Brit arthouse, and predictably state-funded by BBC and lottery money. Static camera, repetitive shots, lots of silence - which all screams state subsidy! Enjoy it - our taxes paid for it!

It's set in Count Durham in 1865, so it's rather baffling that half the main characters are black; now, people may applaud the colourblind approach but it's so absurd, I cannot - it's as daft as casting white ginger persons as Zulu warriors! People really have to get real and ditch the pc virtue-signalling. It made the whole thing unbelievable, frankly. No race issues mentioned either which is absurd for the day - as if it wouldn't be relevant. This is `1865 in Durham, for goodness sake! A real place in real time; play colourblind diversity doughunts with more abstract stories, fine; but do not try to rewrite history according to modern pc prejudices - unless you want your audience to scoff and shame their weary heads at being lectured to by box-ticking casting.

With more accurate and realistic casting and a less pretentious approach, with the focus on telling the story not scoring pc diversity/feminist points, this could have been a great film; as it is, it's a 2 star effort.PC

The best thing about this film was the cat. Don't bother! Slow and boring - the sex scenes might be of interest if you are in the habit of sitting in the cinema in a dirty old mac - but not for anyone else.

You know it’s a British arthouse film as soon as it opens. Close-up after close-up without establishing any context. Dismal artfully-lit illumination. Terse dialogue. A static camera angle. Short scenes that cut before any build-up of drama, as in Monty Python’s ‘and now for something completely different’. And again, that agonisingly static camera. This is more a series of portraits than a movie. Some of the stills, unaccountably, are of a cat. Even with an 80-minute run time before the credits, it seems like a long ‘movie’. As with too many British films, it plays more like an ill-lit over-wrought hour-long period TV drama.

Judging from the interview with first-time director William Oldroyd on the DVD extras, he seems more interested in the idea of making a feminist film than in mastering the art of cinema.

By the way, the film has nothing to do with Lady Macbeth. It’s a 19th century piece in which Mrs Lester revolts against her tyrannical husband and gets it on with the hired hand. And worse. She’s more like a nasty Lady Chatterley. The behaviour of all the characters is unbelievable. The hired hand’s character arc in particular is just ridiculous. You end up feeling sorry for the actor.

Lady Macbeth is a period piece that is sadly more relevant today than that of its novella source from the 1800s. There’s hatred within the picture that brews and bubbles up throughout, only to be locked into a quiet box of uneasy contentment by the end. It’s a chilling film for how its stuffy nature of maintaining a certain sense of dignity and dominance results in a drama of troubling romances and even more troubling murder. It’s this unflinching aspect of the dishonest and disgraceful that makes the film exceptionally chilling.

Katherine (Florence Pugh) is trapped in a loveless marriage to a richer, older man, Alexander, on his expensive rural English estate. Her days are spent in quiet, going through the long process of getting dressed, only to attend dinner parties where she is forbidden to talk to anyone. When night falls, she is expected to undress so that Alexander can merely look at her and go to sleep. There is no romance presence; the only dignity maintained through shut lips and unquestioning obedience. Any speaking out of line and Katherine will be disciplined, the kind she is familiar with when she can’t bear children.

It’s only natural that she could only take so much of this before she snaps. She releases her sexual tension on Sebastian, one of the stable hands. It’s partially out of boredom but also out of rebellion, watching how the men of the stables seem to have all the fun with her maid Anna while she remains locked in the house like a treasure gathering dust. Sex follows because there’s nothing else to do when life becomes so tiresome that even discipline behind closed doors is so common that Katherine hardly bats an eye.

Sexual release quickly turns into violence in the form of poison, beatings, and suffocation. Katherine and Sebastian want their love to survive, but in order to do that within such a strict and stuffy society, they have to be brutally vicious. This means that many murders must be committed and covered up for the sake of maintaining their romance. There’s no happy ending here. Sure, Boris and Alexander will be toppled for the toxic patriarchy they enforce, but at what cost? Katherine’s crusade for freedom and power becomes so bloody that she’s blinded more by what she has to do than what she is actually doing. She doesn’t see herself killing a kid but burying the evidence that threatens her very existence.

Lady Macbeth offers no easy answers to how a woman can assert herself in such a confining and spiritually draining experience. The film ends with quiet once more but a quiet that is still wrapped in beatings, murders, and distrust, with Katherine having thrown so many under the bus to maintain her own power. And in that quiet is an eerie contemplation of how casual dirty deeds can seem when trying to preserve yourself. This makes the film far more than just a female revenge picture but a very disturbing portrait of how the vitriol drenched upon victims becomes contagious, spilling into nastier deeds devoid of empathy. It’s this mood and theme that easily makes Lady Macbeth one of the period pieces of the decade.