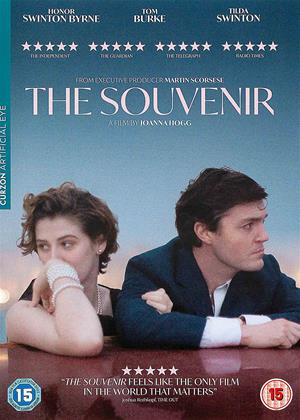 Reviews (4) of The Souvenir

Engaging and intriguing - The Souvenir review by PD

Joanna Hogg's latest film is never not engaging. Her protagonist, Julie (beautifully played by Honor Swinton Byrne), is a 24-year-old 'privileged' woman with a Knightsbridge flat who wants to make a film about a boy growing up by the docks of Sunderland. Quizzed by authority figures sceptical of her choice to stray so far from her own experience, Julie speaks of her insularity, her class privilege, her need to cultivate a socially conscious aesthetic. She pores over black-and-white footage of working-class boys in a school playground , leaning into her manual typewriter (it’s the 1980s) and struggling to concoct a story line. The people who question Julie’s motivation for telling this story are Men Who Explain Things to Her. Enter stage right, Anthony — seen only from the back at first — holding forth in a plummy voice on her proposed characters (“Why are they more real than me?”) and wondering whether she’s trying to peddle a “received idea of life on the docks.” He’s perhaps a bit too ridiculous (“You’re very special, Julie.” “Very normal, really.” “You’re a freak.” “I think I’m quite average.” “You’re lost, and you’ll always be lost”) to be entirely convincing. Indeed, you do wonder if they'd ever be in a relationship in real life - 'how on earth did they get together?' someone asks at some point, and we're inclined to agree, whilst we often want to shout at Julie for her indecision and inability to see the blindingly obvious, but perhaps that's exactly what Hogg wants us to feel. First impressions are soon revealed to be turned on their head, and while Anthony is denying and denying and playing head games (“I know you have a received version of what I’m supposed to be”), Julie is struggling in film school to learn to frame her experience. There’s some loose talk of the mechanics of Psycho and some stabs (no pun intended) at directing scenes, but no artistic breakthroughs. (Not in this installment, anyway: The Souvenir: Part II is in preproduction). Anthony claims to work for the Foreign Office, but a note of scepticism is in order for the simple reason that, as Julie slowly discovers, he has a habit of lying about nearly everything.

The title refers to a painting by the 18th-century French artist Jean-Honore Fragonard that Anthony and Julie view on one of their 'dates'. It depicts a young woman, scrutinised by her pet dog, carving letters into the trunk of a tree. “She’s very much in love,” Anthony says with his usual suave certainty, and perhaps he’s right. But there’s a lot more going on in the picture (as in the film) than that simple declaration would suggest. The woman is making a mark and putting down a marker, declaring her own presence with a mixture of shame and audacity, impulsiveness and deliberation. So, Julie does love Anthony, and sacrifices a great deal for him without quite realising what she’s doing. Over the span of the film her friends slip away, and the work that had seemed so urgent feels a bit more remote. But the interplay of forces in Julie’s life is subtle, as is the balance, in her own temperament, between decisiveness and passivity.

What's the point? Mmm ... well I suppose it's something to do with the director digging into her own past. In her stunning first film, Unrelated (2007), a story of a 40-ish woman who joins a friend’s family in Italy while trying to come to terms with not having children is steeped in honest sentiment, but without being sentimental. It feels detached, but when you get it, you’re overwhelmed by it. We don't get the same feeling here, and because Hogg rarely moves the camera, we might well feel marooned with people you don’t know for reasons we don’t understand. But Hogg usually convinces us that this is the only honest way to tell a story with any emotional complexity. An intriguing piece of filmaking with lots to offer for the patient and those who can live without a conventional narrative thread.

One to miss - The Souvenir review by AL

After watching, or should I say enduring the film, I found that all the glowing reviews were from arty film critics.

Audience reviews are usually at odds with them.

For me I found it slow, over-long, boring, pointless and pretentious.

The best part was when it ended!

Souvenir is memorable - The Souvenir review by JF

Another strong and interesting film from Joanna Hogg. I've loved the truthfulness of the relationships in her other films and this is more personal, apparently autobiographical and equally believable. There is poetry and symbolism in the way she reprises images through the film. Hogg should be winning prizes.

Disappointing and depressing - The Souvenir review by SD

A bleak themed film which is so over edited that there is little chance to feel connected to the characters and whilst it was well acted the whole story was depressing and seemed to have no worthwhile message nor was it shallow light entertainment just a disjointed depression fest I am afraid.