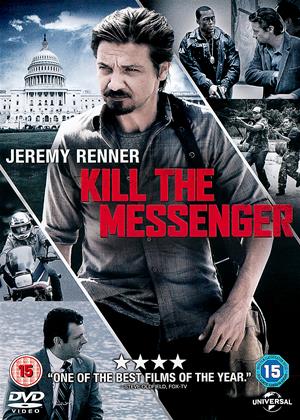 Reviews (1) of Kill the Messenger

Based, to a wide degree, on true story. - Kill the Messenger review by NC

One of the almost-Watergate films trying to validate a lot of lurid journalism. Based loosely around circumstantial happenings to a journalist.

Kill the Messenger is a based-on-a-true-story journalism film in the same vain of All The President’s Men asking how far one should go reporting the truth. How deep is too deep for the hole of information which may lead to the rock bottom of a disgusting corruption? Is it worth opening up a can of worms that may threaten your whole family? And if every force seems to be working against you, should you continue making enemies for what you believe is right?

For newspaper reporter Gary Webb (Jeremy Renner), the story is worth such risks. Not content with the small-time stories of drug dealers and gangsters for his modest Los Angeles paper of the 1990’s, he ends up snagging a big fish when a former call girl of a dealer drops a CIA file on his desk. He’s just stumbled onto a massive scheme by the government to sell cocaine in America to fuel a war in Nicaragua. Through attending various courtroom cases with government agencies and making risky trips to the country rocked with conflict, he slowly starts peeling back the layers of an insidious conspiracy. He drives down to one of the ghettos of LA to witness all the poverty and gang violence spurned on by the presence of selling narcotics on the street and knows then that he has to break this story wide open.

But Webb has some mountains to climb before he can even reach that lofty aspiration. The CIA ask him to back down as he might compromise an ongoing investigation, but he refuses. Soon after he finds himself followed by strange men. Some of them lie in wait outside his home to spy on him while others are more direct in how they forcibly enter his house to analyze his notes. It brings about a severe fear of safety in how he tries to keep his head low. There are no violent attacks against him in the entire film, but the paranoia of such events is ever present in Gary’s mind. He walks to his car in a deserted parking lot with one man following close behind. The two of them reach their cars and the mysterious man drives off. Webb breathes a frustrated sigh of relief. He can feel the invisible hands on his shoulders.

The paper he works for is not as supportive either. While initially pleased with all the attention they received from the press, pissing off the competing news agencies has sparked some doubt about his story. The validity in his argument becomes questionable to the point that the paper considers dropping him as a reporter all together. And, as if all that were not enough, there are problems at home as his once forgiven affair is dug up by his kids that makes his home life much more stressful. His quest becomes so terrifying and damaging that he eventually moves his operation to a hotel where he holds himself up as a conspiracy hermit.

Renner’s performance as the real life Gary Webb is in top form with this film. He perfectly embodies the family man who loves his kids as well as the driven reporter willing to go the extra mile. The levels of anguish increasingly grows on his face to the point where his rage explodes at various points. His motorcycle is stolen which results in him screaming in fury and sending his fist through a car window. When secret agents sneak into his basement during a police call, Gary threatens the suits all the way out of his house and into their cars. Webb cannot let this go and knows that if he doesn’t put everything out in the open he’ll never feel right.

Director Michael Cuesta brings his skill of suspense television from such series as Homeland and Elementary to craft a story that is moving and engaging. He keeps the danger ever present and Webb’s struggle on his sleeve as he clashes words with both his editors and government agents. Cuesta inserts plenty of archival news footage as well and even takes that extra step to insert Renner into some broadcast footage as well. He perfectly places the audience into that mid-90’s setting.

Kill the Messenger is a solid journalism thriller that speaks volumes today of its 1990’s tale of corruption and fact-finding. It’s a dark little reminder for the information age about how much truth may be omitted from both news and government organizations. The movie ends with plenty of public questioning and outrage upon hearing such accusations. The freedom to question the American government when you believe it has done wrong is an important part of trying to make the country better. Kill the Messenger reaffirms that such dissent is not only important, but important enough to fight for even when you seem to be the only one with a hunch.