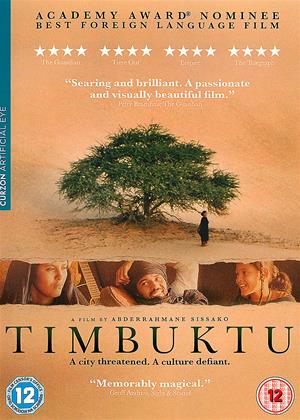 An insight into our 'modern' world - Timbuktu review by blackrocket2000

This is a simple film about a few people, trying to live their life, with very little. Many will have heard of Timbuktu, but most will have little idea where in the world it is. It's in Mali. In Africa. Why should be care?

Watch this film, and try to understand how and why these events unfold. You will be richer for the experience. But you may, like me, question whether the modern world has improved our lives? I was lucky enough to travel thru Mali in 1974, and saw the simple life. How times have changed.

This film's subject is Life under the oppressive Boko Harlan in the Malian city of Timbuktu, and some of it was filmed in nearby Mauritania.

In parts it is deliberately slow. i am used to much more 'speed' in film viewing. A few words on the oppressive regime. Their excesses only emphasise the dignity of the people they oppress. There are language barriers between the regime and the oppressed, so each little would be warlord has his driver/ translator. I am not an expert on Islam, but the source language in Islam is Arabic, and the local people who already are Muslim, have some Arabic. Like the string of beads the film portrays a number of examples of every day oppression. "How" says a local women "am I supposed to wear gloves at your insistence, I sell fish".

Worth watching, but some of the scenes are harrowing.

A film that shows proud and rebellious people, it is made with beautiful images and music, and will leave you with emotions that hurt; through anger and joy.

This is a bueatifully shot film that’s slow in places but works with the emotions of the people living under an oppressive regime. A simple but effective film.

Timbuktu is a film of visual mastery that tells a nuanced story of contemporary rural people trying to live their lives while shackled by absurd laws of ancient times. Its neutral stance and artistic measure calls for both admiration for the community living in such harsh conditions and frustration for the barbaric conduct of their totalitarian occupiers.

It starts by showing a wild animal running for its life, during which jihadists fire shots not to kill it – but to tire it and scare it off. Afterwards, they take aim at some African statues of what’s implied as some sort of significant cultural inheritage. Clearly, no matter their painfully neutral depiction in Timbuktu – it’s clear they’re not the good guys.

Then, at first, it may seem the movie jumps from one character to another and lacks clear proponents. This turns out not to be true however, owing to the fact that Timbuktu acts as a setting, a character and a playground for the flow of life. In this regard, Timbuktu is the protagonist and all events revolve in and around it -- something similar to Ivo Andric’s bridge on the Drina in his novel of the same name, or the house in Chasing Sleep (2000). Not all characters need be human.

The visuals are masterfully done – it almost feels like one’s in the Malian deserts, accompanied by the sounds of eastern strings and the occasional nod to modernity through a cultural diverse melody played on a classical guitar. The people in Timbuktu are real – they speak French, English, Arabic, Tamasheq, Bambara and Songhay; they play football (although without an actual ball because it’s forbidden by the Sharia law); they smile, love and are deeply afraid for their lives.

Timbuktu brings up several conflicts, which through means of irony – are not caused by the jihadists – they act as “the hand of God” and only execute his will – or so they think they do, with Kalashnikovs strapped on their shoulders. The subversive humor of absurdity is hard to neglect: the jihadists ban football, yet talk about the World Cup; they don’t allow cellphones, yet besides the walkie-talkie – it’s their only form of communication; they shoot shrubs, smoke cigarettes and some of them look as they’d better be off home. At moments, one can be distracted by their tolerance and compassion – but this proves to be false as the film goes on to show.

Timbuktu is a great essay to introduce Westerners to cultures other than theirs, with director Abderrahmane Sissako offering a neutral storytelling approach that may infuriate some, alienate others – and leave no one to indifference.