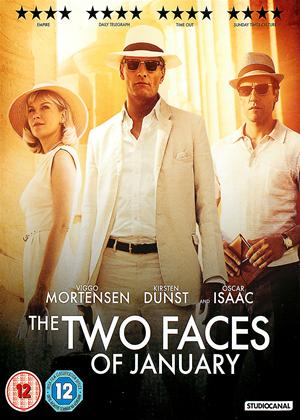 Rent other films like The Two Faces of January

Reviews (7) of The Two Faces of January

I confess that I ordered this by accident as I had seen the trailer and got the strong impression that it would be a total bore but I was actually pleasantly surprised and am equally surprised by the other reviews. Perhaps it's because I have personal experience of jealousy and therefore could relate to the Chester MacFarland character who is forced into holding the company of a young ambitious, charming young man Rydal who seems to do everything right whilst everything Chester tries seems to end in disaster. It reflects how in life, even strong love can quickly turn to hate and what a fine line that can be.

It's true that this is not a fast paced film but the tension between Colette (Kirsten Dunst) and Rydal keeps it going and I actually thought (Viggo Mortensen put in a great performance as the man falling dramatically from grace.

Not as talented as Mr Ripley. - The Two Faces of January review by Steve Mason

Handsome, touristic (set in Greece), leisurely psychological thriller is well acted and well set up, but suffers for lack of an interesting conclusion. Good for enthusiasts of Patricia Highsmith. Better watch the similar Plein Soleil with Alain Delon.

I've no idea what happened, what the story was (I don't think there was one), the acting was terrible (particularly the female), and I am never going to get that two hours back. I am quite cross.

Snoozefest!!! - The Two Faces of January review by ND

Beautifully shot, non offensive acting, but oh my god, what a bore!!!! Don't know how it ended because we switched it off. Do yourself a favor and don't watch this.

Crapopolis - The Two Faces of January review by JD

This tedious pile, has a few redeeming features. Oscar Isaacs is in it, except that he is not at his best. The scenery is interesting, lovely shots of Greece and Crete and .. no that's it. The plot is boring and the characters are not engrossing. The direction is aimless. I watched until the end so there must have been something about it but I can't remember what.

Mismanaged mess - The Two Faces of January review by AS

After a promising set-up, straight from the source novel, the movie meanders into little more than a traverlogue, bland and unengaging, with very scant plot and barely any narrative arc. None of the characters invites either sympathy or empathy. The fault is the writing/directing: Viggo Mortensen doesn't seem to have been advised what to do with his character; Kisten Dunst told simply to look like a perplexed wife; Oscar Isaacs to be perpetually gloomy. The climax, when it eventually comes, looks like something from the Keystone Kops. The final scene is an excruciating cliché.

Unpleasant - The Two Faces of January review by GA

There is not one character in this film who is in the slightest degree likeable. One just did not care what happened to any of them, or spend any more time in their company. I gave up less than half way through.

There have been many great thrillers, thrillers that can be sung about from the rooftops for their breakneck pace or their killer storytelling. Then there are thrillers that plod along like they have seemingly forgotten what the point of a thriller was. Here is a helpful hint for all those filmmakers, the feeling of a thriller is in the title. Clearly someone should teach the director of The Two Faces of January how to at least read before they put a camera in front of him.

The film follows married couple Collette (Kirsten Dunst) and Chester (Viggo Mortensen) as they travel abroad and find themselves in the company of Rydal (Oscar Isaac) and the three form an unusual bond as they find themselves on the run when they are all implicated in the murder of a private investigator and must flee for their lives as the three have to decide which of them actually carried out the heinous crime and for what purpose.

The film has a decent mystery at the heart of it but by the end when you are looking forward to a grand revelation you are so fatigued by the films events that you hardly care. Not only does the film concentrate so heavily on the psychological aspects that it forgets that at the heart of this story are actual characters and real stakes so much so that while certain scenes should be concentrating on the idea that one of these people is a murderer they find themselves psychoanalysing each other.

The whole thing doesn’t quite gel, the cast is excellent and some of the script shines with ambiguity but there are many moments where you will be scratching your head and thinking about why they did it. While you might find some interest in the overthinking, under rationalised story its hard not to think of The Fugitive and wonder how the creators got so far away from the films thriller-esque plot beginnings.