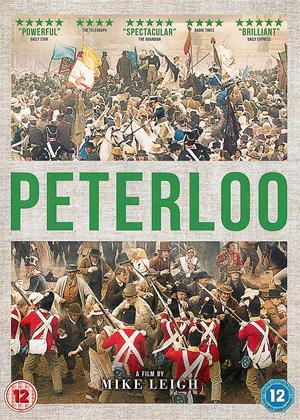 A Story that Needed to be Told - Peterloo review by PS

If you've never heard of Peterloo this is a very good place to start. It is a very thoughtful and well produced film which has a lot of authentice touches. As it's a certificate 12 it is suitable for young people, though it is a trifle over-long and the long scenes of speeches at the beginning were rather didactic and may be off-putting to younger audiences. Otherwise, well worth seeing.

I love the story of Peterloo! I love radical history, I didn’t not love this film. Made a fascinating story very boring. So upset. Mike Leigh makes films that lack interest for me in general.

This is basically another socialist diatribe from director Mike Leigh, full of tell-don’t-show speechifying in place of character and plot. He has previous. Watch with scepticism. “Liberty or death,” chant the crowd. The suffrage meeting in Manchester 1819 was certainly so poorly policed by the cavalry that it caused a disaster, but this is for the indoctrinated only.

3 out of 17 members found this review helpful.

Ironically, as condescending as the upper-classes it sets out to mock. - Peterloo review by TR

I don't like being fed expository dialogue about the Corn Laws and Habeus Corpus, like I was some uneducated idiot. I expect authenticity and scenes that aren't just a series of speeches lazily stitched together. I've long since lost faith in Mike Leigh, but this represents a new low. Condescending and full of its own self-importance, not unlike the elites it purports to mock.

No shortage of money spent on scenery, props and extras. You just wonder why this story justified such expenditure. Who authorised it?

It's done well enough but never really captures the moment. There are much better ways to spend over two hours of your life.

Peterloo gives you a powerful impression of it's time in history - 1819 - a strange, long ago time when we do not really understand how hard and different things were. This is a powerful, big scale film of a little known story. Well acted, well filmed, long but engrossing. They should show it in history lessons in secondary schools. It was a time when demanding one man/ one vote could get you locked up, shot, or as in this film, run through with a sabre by a charging cavalryman.

Mike Leigh often focuses on left wing causes and improvised dialogue etc - and this film is worth watching if only for the interesting dialect (still present in places like Sheffield where they say YourSEN not yourself). But it is a bit of a long slog.

Now I know some won't hear a word said against Mike Leigh and his stablemate Ken Loach, but the sad fact is these two have enjoyed way too much praise and subsidy for what has been mediocre work, despite their 1970s triumphs.

Good to see this event in a film despite all the bias and the wicked King George IV such a cartoon character baddie he could have had a waxed moustache. The Great Reform Act 1832 is something that deserves a film too.

So interesting but not a triumph.

The film starts two weeks before the Peterloo massacre and then spends 2 hours getting to the massacre itself. So we have a procession of talking heads going on about the demonstration, what they want and the emphasis that the demonstration is supposed to be peaceful. Then the demonstration happens and the authorities react with violence. It is a true life account, but it is so dull. The film achieves in two and a half hours what a documentary would do in one hour. Yes, Peterloo was an important event in Britain's history, but the film rather misses this point - as what happened after the event is as important as what happened before it - and that's what is missed. I'm sure some history students would find this interesting, but it is story telling by numbers.

From Waterloo to Peterloo - Peterloo review by RhysH

Of course Peterloo has a resonance for today, protests are taking place all over the world, against governments, against austerity, against the fact that the rich and privileged always rule.

The film has little in the way of nuance, the villains are hideous caricatures of the ruling elite in particular Karl Johnson as the bumbling arrogant home secretary. What a great gift for an actor to play someone so odious. All the ruling class have stepped straight out of a Steve Bell cartoon.

The working class , the protesters are without exception and without being patronising, the salt of the earth. Their cause was just but did they know that their protestations were doomed?

Mike Leigh says that Peterloo should be taught in schools, his film would be a great starting point an essay in political history and a masterclass in film making.

really enjoyed this film , really felt like 18th england, liked the political history lesson and felt the film was well made ,some of the dialogue was a bit theatrical ,

I loved this movie! The characters seemed so realistic. I can imagine the Peterloo massacre being very similar to this. There are a lot of different characters and no major ones, but I had no problem with that. Roro Kinnear as Henry Hunt and Neil Bell as Samuel Bamford particularly good. I wish more films were made like this.

Peterloo is intentionally drawn out to over two hours to show the slow but inevitable rise of a people betrayed by their government. A lot of films might trim down such a progression to speed things along and keep the film under those two hours. But director Mike Leigh takes his time to showcase the grind of bitterness and assembly that soon burned into the tragic assembly of those who wanted changes. And, wow, does that climax sting so well.

The date in question for the climax is August 16, 1819. On this date, some 60,000 citizens assembled in St Peter’s Fields for demands of reform and voting rights. What started as a peaceful protest quickly spun out of control into a violent scuffle between citizens and military that left some dead and many more injured. Reform would ultimately come, as would the formation of the Manchester Guardian, but only after many more years of political unrest. And, yes, it’s quite the sight for such an epic scene of vicious guards on horses swiping with swords at the populace as they arrest the leader of the protest.

But the film will take its time getting to this point by starting at the relatable opening scene of the Battle of Waterloo just after the battle is over. We see the chaos that had unfolded and Joseph stumbles home from the war traumatized after serving in Duke of Wellington's army. The Manchester he returns to with his family is one of poverty. Economic depression is not only affecting him but everyone around their town. Meanwhile, the government does nothing. Political meetings are made and groups are formed. And when it becomes clear that nothing of value will be changed by the government itself, Joshua can pretty much fathom what must come next.

Leigh’s film comes with an operatic assembly where the period is established with elaborate costumes and settings with hundreds of people assembled. Characters speak in big and powerful monologues, mostly playing to a crowd of people to make sure all can hear their ideas across the land. This gives the film more of the appearance of a stage play and a mighty fine one at that. Great proclomations are made with astounding vigor and voice with passionate performances from the likes of David Bamber, Neil Bell, and Marion Bailey. They keep up the historical wonderment of depicting civil unrest quickly brewing to carry us through the many hours of this production before the centerpiece of the massacre takes place.

Peterloo ends on an abrupt note but still an important one. In the last few scenes after the massacre, we see the politicans snickerly and sternly state that order will be maintained and that they know what is best for the people. Cut to the people burying their dead with a prayer and an amen. Reform would come but not for many years after and several never got to see that day. It’s important to end on this note to showcase how hopeless a revolution can seem but how necessary it must be. The decay of order is most present in how the film is seen as a bit of a palindrone, where it begins with violence and ends with violence. The difference is that one was fought with soldiers and the other with unarmed citizens, an act of civil protest that would be an important for years to come in the battle of justice and order. That stirring nature is what makes Peterloo such an engrossing experience.