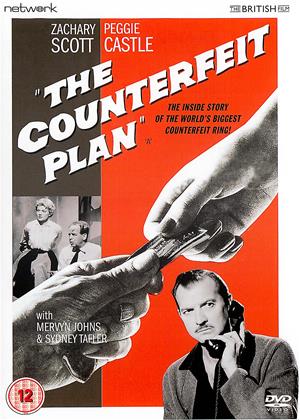 Reviews (1) of The Counterfeit Plan

How many people on Earth at any one time might be watching The Counterfeit Plan (1957)? Perhaps few, but, as is the way with such films, it has stayed around. Sixty-three years on, it keeps one's attention from the start as a horse and wagon block a French country road as part of a plot to spirit condemned murderer Zachary Scott by aeroplane to the Sussex countryside, where former forger Mervyn Johns has a startlingly large country home in grounds large enough for that 'plane to land.

Scott wants more than a bolt-hole. He is keen to pull a new, huge scam. This was not the time of izettle and contactless cards. And fivers were large, with only somebody of Johns's skill able to match the devices by which the Bank of England tried to stay ahead of the hoodlums.

Ably directed by the wonderfully-named Montgomery Tully, who was adept at making a small budget look bigger, the machinations are followed in close detail as the network of “associates” takes in the whole country, with the camera focussing on the area around Brighton station as spivs convene as well as such fronts as poolhall premises for other discussions.

All of which is to reckon without a pretty woman, and the return of Scott's distracting desires. No time to pause, everything runs more smoothly for the viewer than those hurtling about the country under the delusion that they would never have it so good.