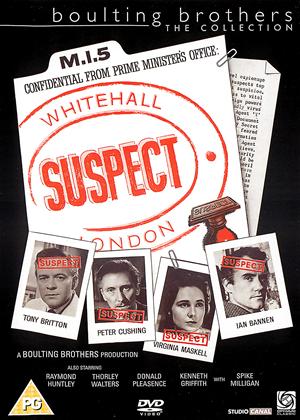 If this site allowed half stars I'd award this film one and a half, because it's not absolutely dreadful, but nevertheless it's pretty bad. The Boulting brothers were best known for their comedies, so a gritty spy thriller about germ warfare was something of a departure for them. It didn't work out too well.

One of the most important elements of a spy thriller, especially one with a name like "Suspect", is to keep the audience guessing as to how guilty the various suspects may or may not be - see "Tinker, Tailor, Soldier, Spy" for further details. The Boulting brothers' idea of suspense is to theoretically suggest that Peter Cushing might be a traitor, assume we'll automatically think that he might be because in horror films he played both good and bad guys, and then introduce Donald Pleasance as a totally unambiguous baddie who is in no way connected with Peter Cushing, and whose cunning plan is in no way concealed from the audience. Oh, and there's absolutely nothing resembling action or suspense until literally two minutes before the credits roll.

Ian Bannen gives a very committed performance as the only remotely complex or interesting character, but he also represents a hideously dated concept of physical disability, which is treated very crassly indeed. And when having both your arms blown off in Korea isn't tragic enough unless your ambition was to be a concert pianist, you know the scriptwriter was laying on the clichés with a shovel. Peter Cushing is as professional as ever, but makes less impression than usual because he's cast in a nothing part. Donald Pleasance is that creepy guy he always played when he was hired to be Donald Pleasance on autopilot. And Spike Milligan provides totally misplaced and embarrassingly unfunny "comedy", as does Thorley Walters as a ludicrously absent-minded spymaster.

Oh, and the plot? Given that the scriptwriter casually lumps together Communism, Fascism, and Scottish Nationalism as approximately the same thing and equally undesirable, and jokingly suggests that the list should also include Zen Buddhism just because it's foreign and weird, it shouldn't surprise you that other aspects of the film's morality are by today's standards grotesque. A woeful misfire all round, and not really worth even 78 minutes of your time.

At a time, in Suspect, when there is a plague affecting many thousands of off-screen people around the world, there is conflict between research scientists (led by Professor Peter Cushing in a rare daylight rôle) and Government bureaucrats (a minister, Raymond Huntley gives several pompous speeches even when in private conversation).

All of which, with a vaccine if the offing after many years' research, makes this Boulting film timely, sixty years on, in 2020.

That said, one might have initial doubts, for, scarcely has it begun than there bursts through the Professor's door none other than a disorderly orderly Spike Milligan, whose, er, comings and goings in a white lab coat are driven by complaints avout a miscreant chimp who continually tries to get the upper paw. This is a far cry from the novel, by Nigel Balchin, upon which it is based, and was added to his screenplay by others. With that out of the way, it settles into something closer to, if not a match for, another Balchin film, Powell and Pressburger's The Small Back Room.

Among those in the lab is Virginia Maskell, a splendid actress who could not be brought round from a suicide attempt in her early-thirties in 1968; which brings piquancy to her broken engagement in the film to a man - Ian Bannen - for whom she still cares after he has lost both arms in Korea, which halts his pianist's career. Chopin and Scriabin fill the speakers at moments of drama, which turn around the possibility of leaking the breakthrough upon which the Government has slapped the Official Secrets Act.

And so develops an observed-of-all-observers plot which draws in an array of familiar faces such as ever-seedy Donald Pleasence, a spivish Sam Kydd and, bizarrely, Thorley Walters whose Secret Service office makes many a Dickens scene appear a pioneer of minimalism.

It would be easy to dismiss Suspect, made in just over a fortnight, as preposterous; perhaps there is a better film lurking with in it, yet there is enough here to carry one through its eighty minutes (time which includes loading the disc).