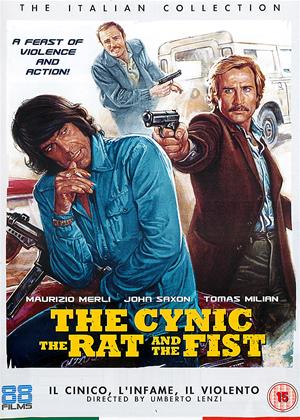 Rent other films like The Cynic, the Rat and the Fist

Reviews (2) of The Cynic, the Rat and the Fist

Euro-caper goodness - The Cynic, the Rat and the Fist review by dl

Doesnt quite live up to or match the sheer brilliance of Lenzi’s other Euro-crime caper Almost Human but does end up being a very enjoyable and above average euro thriller, its fun right from the off has Maurizio Merli a retired cop takes the law into his own hands, the way he kicks down doors bitch slaps and gut slugs nearly every one he meets pays off enormously making great use of them good old dub sound fx, the support players featured here are great treat too we get Tomas Milian who throws in some great one liners has the new rising hoodlum making his mark against John Saxon’s NYC Rome based mobster, storywise its nothing that special but is made up for by so many memorable scenes that include high wire heist’s hospital assassinations obligatory car chases and a great scene showing off Saxon’s macabre golf expertise that was clearly an influence on the later Lock Stock & Two Smoking Barrels, and with the added superb soundtrack this one is well worth checking out for any Italian crime lovers out there.7/10

Dirty Harry, Italian Style - The Cynic, the Rat and the Fist review by Count Otto Black

In the decade after spaghetti westerns peaked and fizzled out, tough crime thrillers were the next big thing to come out of Italy. As with spaghetti westerns and Italian horror films, their big selling-point was that in terms of bloody violence, they went further than was considered tasteful, or even legal, in the USA or Britain. Good acting and well-written scripts weren't quite so important. This is one of the better examples, but it still isn't all that great. And, unlike a spaghetti western, it takes place in fairly recent times that don't have anything the slightest bit mythical about them, except maybe the unbelievably bad clothes everybody wore without noticing how terrible they were, so it hasn't aged that well.

A tough cop who is retired so he doesn't have to play by the rules any more, and is also conveniently thought to be dead, wants revenge on a bunch of bad guys for stuff you'll have forgotten about by the halfway mark. People shoot at each other with varying degrees of success, sometimes try to stab each other for a change, and have lots and lots of those fights where the sound of a fist hitting flesh is more like somebody beating a leather armchair to death with a sledge-hammer. Maurizio Merli, whoever he was, is handsome in a very seventies way, though the blond hair and blue eyes he equips himself with in an attempt to appeal to the American market are so fake that in the dubbed English version of the movie, other characters make fun of his appearance in ways that are no longer politically correct. And he can't act very well. I assume he's The Fist, since he hits more people than anyone else does by a very wide margin, when he's not kicking them or shooting them or throwing chairs at them.

Tomas Milian, who played the hero in quite a few spaghetti westerns, was getting a bit too weathered to be a leading man by then so he's a rather bored-looking baddie called The Chinaman (?), who I assume must be The Rat. And presumably John Saxon, who gives exactly the same B-list bad guy performance as he always did, is The Cynic. It's not made terribly clear. Neither is the plot, which gets extremely convoluted without being terribly interesting. Minor characters, many of whom exist purely to suffer some form of brutality, come and go so casually that you have to stop and think whether this is a new person or somebody you're supposed to remember from earlier on. The big set-piece robbery is extremely dull, apart from a laugh-out-loud scene where the laser-beams crisscrossing a corridor by way of a state-of-the-art security system are obviously solid plastic rods. And the violence, though slightly bloodier than you might expect from an American movie from this era, is rather uninvolving and utterly lacks the grandeur of a well-choreographed spaghetti western shootout. This is the kind of film that trendy people revisit because Quentin Tarantino says it's a neglected masterpiece, but which was forgotten about in the first place because it isn't very good.