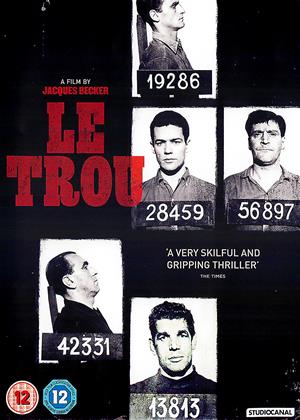 Synopsis:
1947. A young man, Gaspard Claude (Marc Michel), is convicted for the attempted murder of his wife, although he is innocent of the crime. He is sent to the notorious Sante Prison in Paris and is placed in a cell with four hardened criminals. The latter have decided to escape from the prison by digging their way out of their cell. Reluctantly, they take Gaspard into their confidence and labour digging their way out of their cell. Then, just when escape appears certain, Gaspard is called away to see the prison governor...
Actors:
André Bervil, Jean Keraudy, Michel Constantin, Philippe Leroy-Beaulieu, Raymond Meunier, Marc Michel, Jean-Paul Coquelin, Eddy Rasimi, Albert Augier, Jean Becker, Raymond Bour, Lucien Camiret, Philippe Dumat, Durieu, Gérard Hernandez, Jean Luisi, Jean Minisini, Paul Pavel, Paul Préboist, Marcel Rouzé
Directors:
Jacques Becker
Producers:
Serge Silberman
Writers:
José Giovanni, Jacques Becker, Jean Aurel
Others:
Phillipe Leroy
Aka:
The Night Watch / The Hole
Studio:
StudioCanal
Genres:
Classics, Drama, Thrillers
Countries:
France

Cinemadiso's 1960s In Films Vol. 1
16 films by cinemadiso
korean's Rented
144 films by korean
Frankie's 1001 Movies You Must See Before You Die
982 films by frankie
HumilityPrim's Favourites
159 films by humilityprim

Despite a longstanding affection for French film I'd not come across this one before -- I chanced upon it during a general trawl. It has a rather theatrical quality: the claustrophobic setting perhaps making this inevitable. The simple narrative arc and absence of intrusive direction / editing is nonetheless engrossing and the tension builds relentlessly. A piece of pure storytelling and refreshingly 'honest' filmmaking.

Ace in The Hole - Le Trou review by CH

At a time of year when angle-grinders now echo across once-peaceful gardens, one might fight shy from Le Trou (1960). Its soundtrack eschews music for a series of vociferous hand-driven, improvised tools which a group of prisoners use to break through a series of subterranean obstacles in a bid to break free from a crowded cell and, via the sewers, savour the dawn of the Paris outskirts.

Viewers often marvel at the long, safe-breaking opening sequence of Riffifi. With Le Trou, we are in even more extraordinary territory,. These two hours depict the monotony of such labour. By a miracle of script, cinematography and characterisation, it becomes all the more suspenseful with every blow of a chisel into concrete and its feebler cousin: cement.

What's more, this is based on the true story of a 1947 break-out attempt (the year that Burt Lancaster appeared to such effect in the marvellous Brute Force). In turning to this case, director Jacques Becker (who was dying while at work on it) collaborated with José Giovanni who had written a novel inspired by it. What's more, Becker not only built a replica of the gaol's cells and corridors, but used mostly non-professional actors, including one who had been the diligent brains and brawn of the original escape attempt.

An exception to this was Marc Michel who plays somebody added to the four-man cell while his own was being renovated (Becker's son, who worked with him on the film, recalls how prisons were noisy with such work, an inadvertent cover for the escapees' efforts). Michel's character - young, good looking - is charged with the attempted murder of his wife after yanking from her the gun which she had aimed at him, such was her fury at his embroilment with an even younger woman. Meanwhile, Michel becomes in thrall to the men among whom he finds himself. Here, or so it seems, is new world, more secure than the outside one in which he had been buffeted by his emotions.

Becker's son has recalled that he did not want to reveal too much about the way in which the film was made (as if a magician would give away secrets). And he was right. One accepts the way in which a myriad devices - a small mirror in the cell door's spyhole - contribute to this relentless narrative, static equalled by surge; in which, though the great work of cinematographer Ghislon Cloquet, close-ups of these faces are matched by long shots of corridors and sewers.

As such, it is a ready match for underground terrain of The Third Man. What's more, Becker's film could have been called The Fifth Man, such are the quandaries created by that newcomer to the cell. This is not to place to say more on that front, but to lament its first release (as it were) being greeted with far less than the celebration it has since received.

This is a great film. One can happily watch it in solitary confinement. Watch it with somebody else, though, and you find yourselves discussing it for many more hours afterwards.

And a point raised therein is that, despite the gruel put through the door by guards at 6am, the prisoners are amazingly, ripplingly fit. Could it be that, sixty years after this timeless film, prisoners are fed stodge lest a high-protein diet spurs them to bound over the wall?