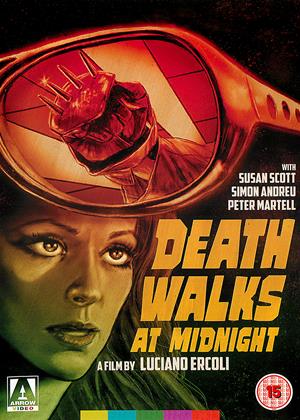 Sign up
The Iguana with the Tongue of Fire

Sign up
The Forbidden Photos of a Lady Above Suspicion

Sign up
The Cynic, the Rat and the Fist

Reviews (1) of Death Walks at Midnight

This giallo features more cigarette smoking than in any other I’ve seen. Never a scene goes by without someone lighting up, putting one out or going about their business with a casual ciggie clinging determinedly to their lips. Also, as is often the case for this genre, the females are not only the victims, but are also far more decent and respectful than the men – certainly Stefano (Pietro Martellanza) is brazenly patronizing and awful to Valentina (Nieves Navarro, or Susan Scott for English audiences) at every opportunity, and his male co-stars aren’t much better. I really hoped I wasn’t going to be asked to believe in him as any kind of hero. The best of this rotten bunch is probably Gio (Simón Andreu), another chain smoker notable for constantly running out of matches.

Valentina, with her incredible mane of red hair, whilst under the influence of an experimental drug, has a vision of a young woman being brutally murdered by a villainous-looking character with a spiked glove. This shades-sporting felon appears to her from then on, many times. Is it a product of her addled mind, as bone-headed Stefano arrogantly suggests, or is the truth more sinister? One thing is certain – any answers don’t come easily in this convoluted, beautifully shot Italian thriller.

In a way, you hope that the villain is purely in her mind. The alternative, of a highly suspicious mac-wearing effeminate looking man in outsize sunglasses always lurking in an almost pantomime manner, not being seen by anyone but Valentina, becomes absurd.

Also absurd, in a thoroughly appealing way, is the somewhat formulaic way the villain (or villains), when unmasked, then take the time to gloat and explain how they got away with their fiendish plan. Here, these revelations precipitate a glorious climactic physical fight that only ends after a series of last-minute, life-saving shocks and surprises.

A little slow in places, and possessing some appallingly chauvinistic behaviour, this is nevertheless great fun and another pleasing addition to the genre.