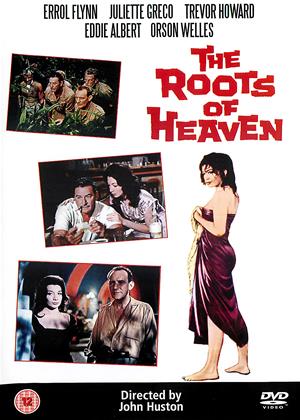 Reviews (1) of The Roots of Heaven

Rogue Human - The Roots of Heaven review by CH

The same evening that I watched Lost Horizon, I had seen The Roots of Heaven (1958). The latter – despite being directed by John Houston with a notable cast – appears to have slipped from the collective film mind. If not the best work of any of those involved, it is more than a curiosity as, in contemporary French Equatorial Africa, Trevor Howard, with that matchless voice which can bring a moral to a phrase (The Third Man - passim), expresses similar concerns about mankind's fate to those of Ronald Colman in Shangri-la.

In particular, and presciently, Howard asserts at the outset that if human beings cannot care for other animals, our own look-out is in peril. The screen has opened with shots of elephants traversing the land, and his concern, with a petition, is to preserve these magnificent creatures from, well, shots by those who think it smart to wield a rifle.

He touts his sheets of paper around a bar which has not only sprung up in this remote territory but is staffed by none other than Juliette Gréco, whose outfits and lipstick are never besmirched by the events as she takes his side in this ecological push.

There is something to be written about the rôle of the bar in outlandish places. It brings together diverse people amidst social and political dispute. Among those with an interest in opposing or supporting Howard for their own sakes are an ever-sinister Herbert Lom and, in his last film, Errol Flynn. Their appearances, however, are as brief as that by Orson Welles, who brings a surprisingly camp turn – bouffant hair and all – to his part as an American television broadcaster. Such exception is taken to him that, in revenge, he is blasted in the buttocks by a rifle, an act which he takes in good part while the offending items are retrieved while he is prone upon a bench; what's more, back in America, he publicises his support of Howard's cause in front of the nation (and, afterwards, rises from a chair which has also contained an inflatable cushion).

All of which is to say that this is an unusual film, and such farce is not typical of it – nor is the scene at a clubhouse redolent of Empire where unseen buttocks are again to the fore, as invaders seize upon a formidable matron and remove her drawers to administer twelve firm slaps as punishment for her gloating murder of an elephant. It is all as if Bunuel had an uncredited part in proceedings.

The film derives from a novel written a couple of years earlier by Romain Gary who worked on the screenplay with the help of Patrick Leigh-Fermor (difficult to believe that elegant writer came up with the inflatable cushion). As with so many involved in this film about tangled lives, their own took various bruises: Gary later married Jean Seberg, whose death in a parked automobile he insisted was not probable suicide but an FBI killing, a persistent thought which contributed to his killing himself a few years later – by gunshot.

The great survivor was Juliette Gréco, dead last year. Those of us who relish her singing have to be content here with a few hummed bars (as it were).