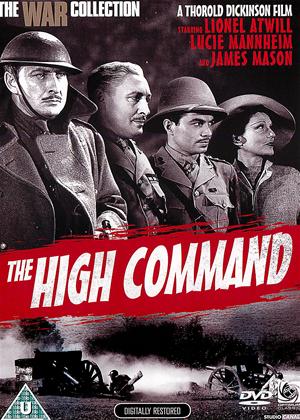 Reviews (2) of The High Command

Late 1930's film with early minor role for James Mason. Shot in British West Africa as it was then. Would of been better if had been longer to allow proper plot development. Too short which meant not enough plot development.

But ok for a one off viewing. Probably a quota quickie.

Another Africa Behind the Shutters - The High Command review by CH

Anybody who arrived late for The High Command in 1937 and, in stumbling across others' perhaps entangled, stockinged knees, may have looked up at the screen and - glimpsing the Art Deco furnishings, bobbed hair and smart jackets - assumed that this was an adulterous drama set in Mayfair.

Outside the clubhouse, as palm trees sway, drums beat to spur on wild dancing (untrammelled black breasts were deemed art by the Censor, who confined those of a white hue to clinging dresses). This is West Africa, where the British Army and Colonial Service are in awkward alliance (the former's territory is an island a mile or so offshore). From a novel by Lionel Robinson, which most likely nobody on earth is reading at this very moment, this was the first film directed by Thorold Dickinson who, alas, in a long life, made only eight more including the English incarnation of Patrick Hamilton's Gaslight and, best of all, Queen of Spades.

Thorold had been in films since the late-Twenties, visited America to study the emergent talkies and, on return to England, found himself in demand as an editor. Film is as much a world as any other in obliging one to grasp, or avoid, those opportunities which present themselves. At the time, and subsequently, some commentators have asserted that Dickinson should have given berth, rather than birth, to this project. One of those who understood its great merits was Graham Greene, whose Journey Without Maps showed a firm appreciation of the African landscape. In his review of the film for the magazine Night and Day that hot summer, he castigated the Sunday Times reviewer who had found it an additional soporific. As Greene said, anybody could find things to deride “in this picture, but a film critic should be capable of distinguishing, from the faults due to a poor story, an uncertain script and mere poverty [of funding], the very high promise of the direction”.

The story. That late-arriving cinemagoer in 1937 would also have missed the substantial prologue. Set amidst the Irish Rebellion of 1921, the sequence is a taut piece of work whose upshot is that it allowed one English officer, in the twilight, to shoot dead another who had previously made free with, even impregnating the woman now his wife. And so it seems, as the bullet does its job, all things must pass.

A doctor at the autopsy had his suspicions, but kept quiet the evidence which he retrieved from that sundered heart - and now finds himself in Africa, and in blackmailing proximity to that officer who is now a General (Lionel Atwill) who appears thankful of the opportunity to endorse at a bewigged Court Martial under the African sun that the murder was committed by another officer, one... James Mason, who, in one of his first rôles, utilises those full, arching eyebrows and burring voice to lifelong effect.

This is but part of it; there's no denying, as Greene said, it's script heavy (or, in his phrase, “slow, jerky, and obscure” - which is quite a concession by a novelist who professed to avoid adjectives, let alone laden, late-running 'buses of them, accurate as this one is). Greene highlights “one unfortunate scene of unconscious humour when a villainous trader about to placate his wife with a pearl necklace is interrupted by an unexplained woman in a similar pearl necklace who pops silently through a window, gives a dirty smile and pops out again, like the horse in Mr James Thurber's story which was always putting its head through the drawing-room curtains”. I too puzzled over that, and took her to be one of this husband's, shall we say, parallel amours.

There is no doubt that here is a ball of confusion. And yet, time and again, one is pulled away from such puzzlement. to delight in the wit of the film-making process, such as a foghorn in the distance when a General blows his nose. Imperfect, continually enjoyable.