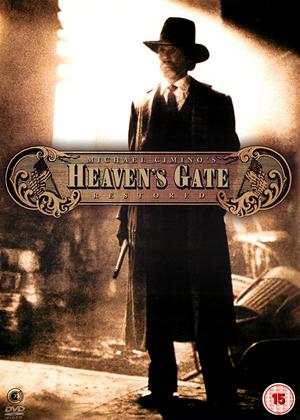 After directing the highly successful and admired Vietnam war film 'The Deer Hunter' Michael Cimino went on to direct what was at the time the most expensive film ever made, the epic western 'Heaven's Gate'. When it was first shown it was critically panned, then re-edited down to a shorter version, but when released it was a major box office failure. It is credited with causing the bankruptcy of the film company United Artists and is cited as not only one of the most expensive but also one of the worst films ever made.

The major characters are played by well known actors including Kris Kristofferson, Christopher Walken, Isabelle Huppert, Jeff Bridges, John Hurt - so surely it can't be all bad, can it?

The story is based on the so-called Johnson County War, a range war that took place in Wyoming in 1892 between settlers and larger established ranchers and culminated in a shootout between the small ranchers, gunmen hired by the Wyoming Stock Growers Association (WSGA), and a sheriff's posse, eventually requiring the intervention of the Cavalry on the orders of US President.

It's a drama, so don't expect historical accuracy. The small settlers are portrayed as immigrants, almost entirely from eastern Europe and there is much speaking of Serbo-Croat etc - but this dialogue isn't subtitled, so a thumbs down for that. The film opens at a Harvard graduation celebration which introduces the principal character Jim Averill (played by Kris Kristofferson) and also Billy Irvine (played by John Hurt, who looks very elderly for a new graduate!). The street scenes were filmed in Oxford, and there are plenty of recognisable locations.

The film then moves out West, where Irvine is somehow involved with the WSGA who are recruiting gunmen to hunt down and kill 125 named settlers. Averill is romantically involved with Ella Watson (played by Isabelle Huppert) who runs a brothel. Nate Champion (played by Christopher Walken) is a gunman who works for the WSGA, but is also a friend of Averill and a rival for the affections of Ella Watson. It also turns out that Ella's name is on the list to be eliminated. Confused? You will be...

After assorted long drawn out scenes, the film climaxes in a lengthy and bloody battle sequence as Averill leads the settlers using almost medieval-style siege machines into battle against the hired gunmen. Just about everyone dies - and that's it, apart from an ambiguous ending on rich-man Averill's yacht which shows him with his Harvard sweetheart.

So that's the story - but what's the film really like? Is it a turkey? Is it a stinker? Well, it's certainly over-long and somewhat disjointed, but the bustling western townscape scenes are well realised and it is very prettily photographed. But I never felt any empathy for the characters who all seemed unrealistic, and the battle climax also seemed unrealistic, sort of like an old-fashioned Western where encircled wagons are surrounded by wheeling Red Indians - only here it's the baddies being encircled by the immigrant settler goodies. And the characterisation of a goody goody Jim Averill falling for a goody goody local whore is all very silly stuff. Kris Kristopherson may be a good songwriter, and perhaps even a good country singer, but he is certainly a wooden actor.

Whatever the director's intentions, this lengthy film is over complex, the characters and the story confusing, the acting stilted. So yes, it's a turkey, I can't recommend it - but I have seen worse. It's worth seeing for curiosity value - or am I missing something? Unfortunately life is too short to watch a 3½ hour film again to find out. 2/5 stars.

I don't mind slow paced films, but Heaven's Gate is a glacially slow, self-indulgent, director's folly. The impressive cinematography and production design cannot make up for the dull acting, mediocre characters and weak plot. This film was critically panned on release and bombed at the box office for a very good reason. This is three hours and twenty-seven minutes of your life that you will never get back.

Boringly slow and no subtitles - Heaven's Gate review by Bill

the acting was dull, the characters were dull, the story could have been good with an inspiring director but it was very very disappointing, and if your hearing is even slightly below par you will miss most of the mumbled conversation, or maybe it is just a poor soundtrack.

On my Own - Heaven's Gate review by TP

Had to watch this one on my own, as for some reason the idea of a critically panned 3 1/2 hour western didn't appeal to my partner. Beautifully shot, and the music was very reminiscent of the Deer Hunter. Slow paced doesn't begin to tell the story, but I thought it was watchable and pretty relevant in the Donald Trump era. I liked it and would watch it again if only I could find someone to watch with me or at least let me have the telly for the day.

Handsomely photographed Western set during the Johnson County War in which the representatives of the Wyoming Stock Growers association hire gunmen to kill 125 immigrants who they believe are stealing their livestock. Kristofferson plays Jim Averill, a sheriff who organsises a posse to resist the gunmen.

If the plot seems threadbare that's because it is! The characters are thinly sketched (we don't learn anything of their motivations which would make this a more compelling drama). Kristofferson is a wooden actor: but he is given little to work with. Heaven's Gate has some redeeming features - principally the photography, costume design and the operatic score. The end sequence was well staged and executed but it takes a long time coming. This bombed for good reason on initial release and its easy to see why.

Uktimately its hard to consider this film solely on its merits as a film as it has attracted so much notoriety as a flop that put UNited Artists out of business. Ultimately westerns can be compared to American political parties. This is very much a Democrat western. Privileged graduate Jim Averill heads to the American west and gets a job as a lawman in Johnson County Wyoming. When he finds out that the local cattlegrowers association has a deathlist of thieves and anarchists to be shot he sides with the poor. It is miscast, incoherent, self indulgent and very overlong but the cinematography is superb. A fascinating, flawed masterpiece. Please be warned there are some very violent scenes and there is cruelty to animals. Ultimately make up your own minds