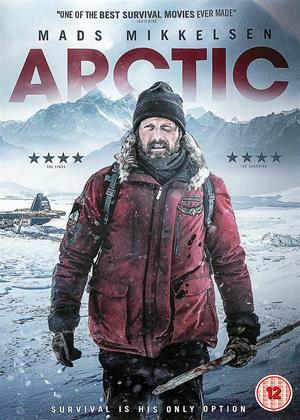 Synopsis:
Mads Mikkelsen gives a tour de force performance as a pilot whose plane has crashed in a remote corner of the Arctic. Stranded in the wilderness he uses his ingenuity to survive. When about to receive his long-awaited rescue, an explosive accident means his opportunity is lost and the dire situation further complicated. The tragic turn of events, involving another crash survivor forces the pilot to make a perilous choice between the relative safety of his camp and a deadly trek into the unknown.
Actors:
Mads Mikkelsen, Maria Thelma Smáradóttir, Tintrinai Thikhasuk
Directors:
Joe Penna
Producers:
Noah C. Haeussner, Christopher Lemole, Tim Zajaros
Writers:
Joe Penna, Ryan Morrison
Studio:
Signature Entertainment
Genres:
Action & Adventure, Drama, Thrillers
Countries:
Iceland

This film is OK and stars Mads Mikkelsen who is a GREAT actor (watch THE HUNT). But I just think WHY?

Maybe it's an attempt to ape other survival dramas like The Revenant or Everest or others?

You can PREDICT there will be lots of ice and falling down crevasse and, as this is the Arctic, yes to polar bears and no penguins (no spoilers!)

At the end you just feel a bit MEH really.

Weird watching it in the heat of summer as I did too. I felt like getting some ice cubes out of the freezer, just for the empathy...

Not bad but a bit pointless, and not even as one would expect, a true story. Mads Mikkelsen can do MUCH better than this.

Tale of endurance with something missing - Arctic review by AB

So this film is another mostly exciting, epic tale of endurance in glacial conditions. Mads Mikkelsen acts his socks off for most of the film. But I feel a bit cheated by both the start and end of the film. The start because the plane has already crashed and we get no back story about who Overgard (the Mikkelsen character) is, what he is doing in the Arctic, and how come he is so proficient in survival techniques. And the end because the film ends abruptly without telling us what happened to the two survivors - did they in fact both survive? Still, I think it is worth a watch. Oh, and if ever your plane goes down in the Arctic, stay where you are and wait for rescue!!

I really liked this film. I liked the openness of the story; no back story or flashbacks to explain what went before and plenty of occurrences that could be taken several ways, love it! Makes a refreshing change from the formulatic rubbish that gets made recently.

Very minimal dialogue that just adds to the atmosphere and some epic acting.

When a film or a performance is described as a “tour de force”, it usually indicates a lack of plot or scope and doesn’t bode well. Arctic is an exception. There are some moments early on, as downed pilot Mads Mikkelsen goes about his daily survival routine, when it looks like the viewer might be in for a long haul, but the pace soon picks up, with plenty of incident to keep the plot moving along as Mads is faced with one predicament after another.

It develops into an absorbing tale set to stirring music amidst stunning wide-screen snowscapes. The scene where he has to haul a sled up a precipice is enthralling. The scenery and the bears evoke memories of The Revenant and Touching the Void. It’s the first feature film of co-writer/director Joe Penna and he is obviously a name to watch.

AT ALL COSTS AVOID THE TRAILER, which is basically a precis of the whole story. The blurb will tell you Mads isn’t the only person in the cast and that’s all you need to know to get the most out of the film.

Edge of the seat tension - Arctic review by MB

Much more exciting than I expected. Excellent acting, realistic plot and beautiful scenery. I recommend this.

Much better than expected.. - Arctic review by LB

Film began AFTER the crash so avoided the usual panic of the crash itself and the following fight for survival didn't follow the usual rubbish formula of monsters, superheroes, or strange non-Arctic creatures....

Mads Mikkelsen carried the entire film with his under-stated acting and virtually no dialogue, and in addition we got no backstories at all so it was very much a 'what you see is what you get'.

Personally I found it much more realistic and gripping because of that.

Mads Mikkelsen is very impressive as the main actor in this Arctic drama.  The landscape is captured brilliantly by the wide lens camera work and Mikkelsen brings humanity to the role, especially when confronted with ethical dilemmas.  The lack of context and relationships makes this more of a genuine survival film.  Well worth a watch.

Arctic is a survival adventure smart enough to know where its strengths lie. It’s not in the dialogue which mostly amounts to cursing and long-winded speeches about life in this type of scenario. It’s not in the action of a crash-landing plane or the dangers of local wildlife, though that is present within the film. No, the true appeal of these types of pictures is the mood it sets. And here is a film-wise enough to know that watching Mads Mikkelsen struggling to brave a stranded stay on a snowy mountain is compelling enough with bloated melodrama ramblings.

Mikelson finds himself as the sole survivor of a plane crash. His supplies are limited. Food is sparse. Fire is limited. The cold continues to mount. Wolves are near. But Mikelson holds his own with very little in terms of resources and words. He lumbers through the environment, silently seeking civilization. He hunts for food. Sometimes he is lucky but not often. He has flares but, of course, the one plane that passes by will not see it. A twinge of hope that flickers out, as most survival adventures do. It could never be so easy.

The first half of the film meanders with Mikelson and it plays fairly well. Watching him scrounge through the endless white and trying to shut out his despair when all on his own is quite the performance. There’s no shortage of actors who could pull off this stranded character trope, slowly losing their mind as they gain frost on their faces. Mikelson is particularly interested in how he maintains a consistent silence of control. He realizes he can’t stay in the same spot for too long but tries to remain calm in such a dire situation. This limited voice makes his cries from when his attempt at a flare-based rescue goes wrong, hit far harder than the actor screaming with his fists punching the snow. The struggle remains mostly internal.

Those fearing this is the whole movie may be relieved when the tension ramps up higher in the second act. His wife (Maria Thelma Smáradóttir) is alive but not responding and she won’t last long if he doesn’t act fast. He’ll have to ask fast, especially when there’s a wolf right outside the crashed plane he has converted into a shelter. They’ll have to make the long trek and it won’t be easy. Their journey is fraught with much peril, at one point involves wolves and ice. And from there the tension keeps mounting so that by the time a helicopter will finally arrive, there’s a sense of relief.

Arctic is the directorial debut of Joe Penna and it’s not half-bad for a fairly predictable genre. It follows all the familiar tropes but mostly follows them with a certain grace, playing up the survival instinct with earnest. There’s little here to subvert from the familiar, mostly keeping on track right down to the moment of wolf prowls on into the shelter, growls, and forces Mad to get violent. But it’s sufficient production with lots of great shots and a strong performance from Milkeson considering he’s working with so little, in more ways than one.