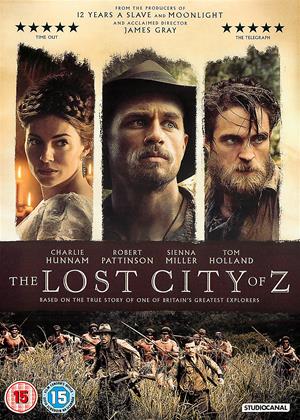 Incredibly dull - The Lost City of Z review by JS

Maybe some true stories just aren't fit to be made into movies. This would be an example. A rambling, unstructured story (a bit like much of real life), ending in a sort of anticlimactic non-ending. A couple of hours of my life that I'll never get back.

I was hoping for an Indiana Jones type film with perhaps a tad more realism. What we get is a bit dark, a bit hopeless, a bit boring. The most interesting thing in it was Robert Pattinson's beard! I guess this is more like what archaeologist/ adventurers actually do. Hard to sit right through it. Good point a previous reviewer made - if you want to find out more about the real person portrayed, the 'extras' had quite a lot about him. Missed doing that as I couldn't wait to send it back.

Slow pace - The Lost City of Z review by MC

Interesting story based in truth. Treatment here was VERY slow and oversimplified. Picks up a bit in the second half, but could have been half the length. Acting was a bit stilted and dialogue quite corny.

Slow to get into the action. I have read Expedition Fawcett and feel that the lost Civilisation was not explained enough. Really should of skipped the horrors of WW1 (maybe used the time to explore the background of Z. Worth watching if you like exploration films, not an action film. Good but wasted opportunity. Worth reading up on background of Z prior to film. The film does not explain it to you.

This film is 3 major flaws: 1) it strives to preach 'political correctness' with lecturing through various characters - the wife, and various types lecturing about how natives are the equal of whites - and as usual via the method of having cartoony stereotyped idiot buffoon upper class white British men spouting tosh. This should all have been cut from the film because 2) it's overlong - half an hour or more - and it drags. 3) the sound is awful - the soundtrack is too loud and the dialogue sounds muffled. I used subtitles.

Watch the movie 'Gold' to see how it's done. That is a superb adventure tale.

Fact is, Europeans already knew about South American cultures before this story which is early 20th C - and we've known about the Aztecs and Inca for 400 years.

This is so-so as a film but it could have been so much better. The end is made up for cinematic reasons btw - I heard a radio doc about this story last year.

But it passes the time. And it's interesting to watch a movie set in South America - but do watch the great APOCAPLYTO if you haven't to see how it could have been!

Lacklustre biopic - The Lost City of Z review by Alphaville

This underpowered historical drama about the adventures of Percy Fawcett in South America has a TV vibe. There’s plenty of opportunity here for jungle drama and excitement but James Gray directs by the numbers with static camera and can’t imbue his characters with any dynamism. It’s all dressing up and restrained acting, like a TV period drama. The action flits between London and the jungle with no sense of timing, pacing or development. The acting is stagey to say the least. Charlie Hunnam as Fawcett has no screen presence, while even Robert Pattinson lacks his usual charisma. Of the main characters, only Sienna Miller as the long-suffering wife rises above the film’s deadening hand.

It’s one thing to be true to Fawcett’s memory, but real life rarely has the drama or pacing required to make a successful movie plot, not when filmed as painstakingly as this. It’s a missed opportunity to do Fawcett justice and make what could have been an exciting and inspiring adventure story.

Expliorer - The Lost City of Z review by EO

I did enjoy this film,I didn't know about this explorer Percy Fawcett .Well acted ,it was at times overlong and the dialogue was a bit trite.Nina Fawcett played by Sienna Miller was irritating at times.She said a big speech about being equal to Percy ,then she blindly supported him going off to find Z. Great extras on the DVD about Fawcett

Colonel Percy Fawcett was a curious man, and there's a good film to be made about him. Unfortunately this isn't it. Movies about real people are always difficult for Hollywood to shoehorn into its mould because very few of us manage to wrap up our stories with neat Hollywood endings. Fawcett devoted a large part of his adult life to perilously hacking through disease-ridden jungles in search of a lost city so legendary it didn't even have a name. Of course, this being a true story, he never found it because it didn't exist, and eventually his luck ran out and his obsession killed him. As a character study of a weird, mystically inclined, incredibly stubborn man whose own books, with their bizarre accounts of giant spiders and 60-foot snakes, seem to show that for him the border between fact and fantasy was always a little blurred, and with a wildly imaginative director like Terry Gilliam at the helm, this could have been an excellent movie.

Instead, the inevitable tampering with history happens in all the wrong places. Fawcett's character flaws and even his eccentricities are whitewashed away, and he becomes a passionate crusader for 21st. century right-on political correctness, spouting clichéd holier-than-thou anti-racist sermons in Edwardian England. His motive for abandoning his family to risk his life in search of a city so imaginary it's near-as-dammit called Oz is to show Europeans that their brown-skinned brothers are in no way inferior to white men, because if he can prove that so-called savages built a really impressive stone city in South America, racism will disappear overnight. Just like it did when the Inca and Aztec Empires were discovered by the Spanish conquistadors 400 years previously.

Deleting most of what makes Fawcett interesting to turn a selfish fantasist looking for something as real as the pot of gold at the end of the rainbow into a more conventional hero doesn't solve the problem that in reality, Fawcett died trying to reach a non-existent place because he was too stubborn and egotistical to admit he'd been on a fool's errand all along. So the script has to wriggle out of it by heavily implying Z was real, and Fawcett would have found it had his noble quest not been sabotaged by an entirely fictitious character who is as clumsily boo-hiss politically incorrect and rotten as Fawcett is saintly, which briefly provides the nearest thing the story has to an actual plot. And the desperate attempt to avoid ending the film on a downer without telling complete lies is truly groan-inducing. Obscure C-list director James Gray isn't awful, he's simply workmanlike in a boring TV movie kind of way. Given such thin material to work with, Charlie Hunnam would have to be a truly superb actor to make Fawcett interesting, and he isn't. Sienna Miller's a lot better, but as the wife who gets left at home and therefore never does anything the slightest bit exciting, she ends up spouting PC feminism so predictable she even does the "how can men say women are weak when we have to bear the pain of childbirth?" rant.

This film obviously means well, but it takes a completely misguided approach to the true story of a Quixotic fool. As an "adventure" the goal of which is never accomplished and never could have been, it fails to thrill. Technically it's adequate at best, and in places the sound is very poor (oddly, the sound editor seems to have had more trouble recording audible dialogue on a studio set than in the middle of a rain-forest). And nobody likes being preached at. I'm giving it more than one star because at least it's not cynical, and all concerned are clearly doing their best. Unfortunately it's nowhere near good enough.

I missed this movie when it was on the big screen and having watched it on a small one I'm so glad I was spared a more expensive viewing. I don't know anything about Percy Fawcett and this movie didn't make me want to find out. I agree with the comments by other reviewers about all the PC rubbish that was touted. The acting of the main characters was leaden and the pace glacial. No saving graces and not even worth one star.

Just boring from start off. The characters were just so uninteresting that I did not care about any of hem. It could have been a good film but it isn't.