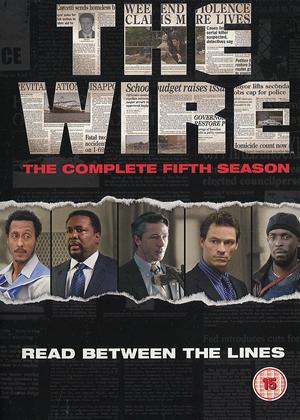 Synopsis:
Read Between the Lines. In a city that can no longer even recognize its problems, much less begin to solve them, police detectives attempt to bring in one last, worthy case against a violent crew of narcotics traffickers. And when bureaucratic poverty and infighting threatens that case, one detective will risk everything, creating a fraud that will eventually entangle the city newspaper, which is weakened by declines in circulation and advertising. With journalism itself so vulnerable and desperate, an unscrupulous, ambitious reporter will ride the story wherever it goes - or wherever he wants it to go.
From the streets to the port to the schools and the halls of government, The Wire has chronicled the tribulations of a post-industrial American city. Now, in its final season, the drama directs its last question to the media and its consumers: If anything in The Wire's depiction of urban America was genuine or important then what is it, exactly, that occupies our attentions? What are the stories we embrace? And what are the stories we ignore? And why?
Actors:
Dominic West, Reg E. Cathey, John Doman, Aidan Gillen, Clark Johnson, Deirdre Lovejoy, Tom Mccarthy, Clarke Peters, Wendell Pierce, Lance Reddick, Andre Royo, Sonja Sohn, Seth Gilliam, Domenick Lombardozzi, Michael Kenneth Williams, Gbenga Akinnagbe, Jamie Hector, Neal Huff, Jermaine Crawford, Corey Parker Robinson
Directors:
Dominic West, Joe Chappelle, Ernest R. Dickerson, Joy Kecken, Scott Kecken, Daniel Attias, Agnieszka Holland, Seith Mann, Anthony Hemingway, Clark Johnson
Producers:
Karen L. Thorson
Creators:
David Simon
Writers:
David Simon, Ed Burns, William F. Zorzi, Chris Collins, Paul Attanasio, Dennis Lehane, George Pelecanos
Studio:
Warner
Genres:
TV Crimes, TV Dramas

The best drama series ever made, and I'll fight anyone who says otherwise! - The Wire: Series 5 review by CP Customer

What to say about The Wire that hasn't been already said? To mention the Shakespearean sweep of the plotting, the wonderfully intimate detail of the characterisation, the political content that never preaches or tells the usual lies?

Having recently seen the last episode, I want to say how I will miss all the characters, how small details of previous story arcs keep returning to me like a friend's life story. The drama is so very gripping that you hardly notice how well it is shot, and the fact that it has taken four years for Simon and Burns to win an Emmy at least for the writing, is a testament to the paucity of critical judgement of those who run the tv awards.

If you've never seen it, do yourself a favour and start with the first episode. You will find it concerns a group of small, almost closed worlds, set in Baltimore Maryland. The police, the gangs, the docks and fading labour unions, the politicians at City Hall, the schools, and finally the media through an examination of how the news is made at the Baltimore Sun. I envy those who have never seen it and have this treat to come, but we've bought the lot and will be starting from series 1 again soon.